Where it all began Part 3 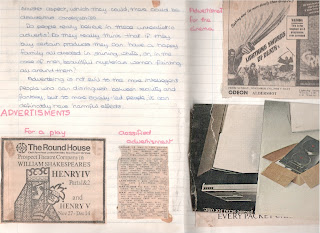 ... and the final installment of my words of wisdom about advertising, aged 14. Part 2 is here.

"Advertising has changed greatly in the last hundred yeras. In the 19th C and at the beginning of this century, advertisements were very drab and had no impact, but crammed in a lot of small writing with a small or no picture. Adverts today say more in less space and seem to have more effect on the population.

But has advertising progressed too far? No doubt it has a great effect on the public. It is frightening to see how people can be taken in by things like this. Hitler realised this and used this to his own advantage by churning out reels of pro-Nazi and anti-Jewish propaganda. The adverts of today are of little importance, but if anyone uses this in a more sinister aspect, which they could, there could be disasterous consequences.

Do people really believe in these unrealistic adverts? Do they really think that if they buy certain products they can have a happy family all dressed in shining white, or, in the case of men, beautiful mysterious women fainting all around them?

Advertising is not evil to the more intelligent people who can distinguish between reality and fantasy, but to more easily-led people, it can definitely have harmful effects.

But although advertising can be misleading, it also has a need. Advertising is useful because it tells people of the variety of products, what products exist, what they are and how much they cost."

So there you are. A dilemma of conscience even back then.

heating and air conditioning said...
This comment has been removed by a blog administrator.
3 August 2013 at 08:39