Stand up to live! 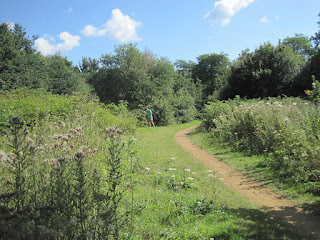 I wrote a post a little while ago about creativity, and particularly how the incubation phase, where 'nothing appears to be happening' can be much enhanced by a walk outside, or a 'slow ascent of wooded hills on a sunny day', as Helmholtz put it.

I often come back to this thought, and to John Le Carre's assertion that 'a desk is a dangerous place from which to view the world.' Whether we are creating something, or merely putting previously unconnected ideas together to gain a deeper understanding of something, the process needs time and space.

There's a fascinating article here about the connection between walking, thinking and writing, with some of the physiological basis for why a leisurely, or even brisk, walk may stimulate thought and creativity. But it seems that if you're trying to find the definite answer to a specific question, then walking ain't the way to find it.

And, furthermore, if you do go for a walk in search of original thought, then best to leave the mobile behind. This excellent article warns of the dangers of distraction: living online rather than going online now and then.
Posted by Sue Imgrund at 16:52 No comments:

The Joy of Words 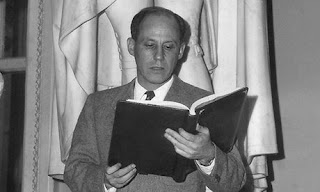 If you look at the history of advertising, it's been a three-parter so far. Back in the very early days, many people couldn't read, or didn't have access to a daily paper, so advertising worked primarily through visuals and symbols. The first part of the 20th century was dominated by words - copy -  and there was a golden age (I think) where art directors and copywriters were put together as teams and produced some of the best advertising ever. This co-incided with the rise of commercial TV.

Then there's this century so far, where screens are all around us, and the emoji has taken the place of the text-speak.

I still have a hankering after words, maybe because I write in my spare time. I recently got the book version of Shaun Usher's brilliant website, Letters of Note. Shaun Usher's favourite of his collected letters (and mine so far) has to be the 1934 covering letter from Robert Pirosh, who at that time was a Madison Avenue copywriter, but had designs on a career as a Hollywood scriptwriter.

How could anyone resist a letter that starts: 'I like words'? And, here it is in its full glory:

Dear Sir:I like words. I like fat buttery words, such as ooze, turpitude, glutinous, toady. I like solemn, angular, creaky words, such as straitlaced, cantankerous, pecunious, valedictory. I like spurious, black-is-white words, such as mortician, liquidate, tonsorial, demi-monde. I like suave "V" words, such as Svengali, svelte, bravura, verve. I like crunchy, brittle, crackly words, such as splinter, grapple, jostle, crusty. I like sullen, crabbed, scowling words, such as skulk, glower, scabby, churl. I like Oh-Heavens, my-gracious, land's-sake words, such as tricksy, tucker, genteel, horrid. I like elegant, flowery words, such as estivate, peregrinate, elysium, halcyon. I like wormy, squirmy, mealy words, such as crawl, blubber, squeal, drip. I like sniggly, chuckling words, such as cowlick, gurgle, bubble and burp.I like the word screenwriter better than copywriter, so I decided to quit my job in a New York advertising agency and try my luck in Hollywood, but before taking the plunge I went to Europe for a year of study, contemplation and horsing around. I have just returned and I still like words. May I have a few with you?Robert Pirosh385 Madison AvenueRoom 610New YorkEldorado 5-6024

I have a belief that if we work in Marketing or Advertising, even if we aren't copywriters, we should be able to put together words in a way that shows we like them, love them even. We are in the business of communication, so surely our documents and presentations should be written with care and feeling and attention to the richness our vocabulary gives.

Instead we (self included) so often fall back on whatever the flavour of the year buzz words are. Engagement (which to me is nothing more than an amalgam of the first bits of that AIDA model - awareness/attention and interest/involvement.) Experience. Insight. Content. KPIs.

Next time, I'll see if I can replace those with fat, buttery words, suave 'V' words or even sullen, crabbed, scowling words.
Posted by Sue Imgrund at 17:12 2 comments: 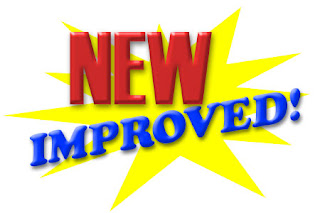 I've been wondering for the last year or so whether I should upgrade my iPhone. I have a tendency to hang onto mobile phones so long that they end up being retro. My iPhone 3G has a poor excuse for a camera, and most apps only half work, but, I don't know, I'm kind of attached to it. When I first got it I felt terribly leading edge and I take a strange satisfaction in showing that off in a subtle way.

Apple have recently launched the iPhone 7, so I thought I'd have a quick reccy as to what's on offer. Here's an introductory film, voiced-over by Greg Joswick, VP Worldwide Product Marketing:

What do we have here:

A load of adjectives in the comparative form, culminating in 'the best iPhone ever.' So the comparison is with previous iPhones, not with the competition that's snapping at their heels. 'Best iPhone Ever' is supported by a catalogue of technical product details. Apple have gone all Procter & Gamble, old style, with a claim, a demo and a load of 'reasons to believe.'

Where's the magic? Where's the wow? The only genuine new points seem to be that the iPhone 7 is water resistant (big deal) and there's no little hole to stick your headphones in (so you either have to get an adaptor, or buy the super new AirPods at huge expense.)

Apple have been having some rough times recently. Revenues are down, and the company has been ordered to pay a large tax bill in Ireland which hasn't done wonders for the corporate image.

I'm not sure that going back to 1970s-style detergent marketing is the right way to go.

I think my trusty iPhone 3G will stay with me for a bit longer.
Posted by Sue Imgrund at 10:04 4 comments: 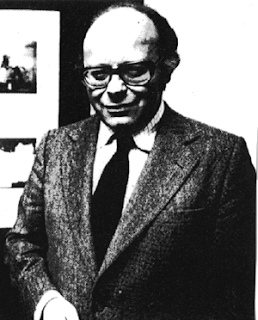 The curiously-titled '98% Pure Potato' is the history of the origins of advertising account planning, taking us from the beginnings in the mid-60s in the UK up to 1980. In addition, the authors take a look at the 'state of the art' of planning today, and a glimpse into the future. I started my career in advertising in the 80s, so many of the contributors to this book were known to me by name if not in person.

The book starts with some scene-setting - the context of the advertising industry in the 60s as well as the social and cultural background of the time. Next, the creative leap in thinking about advertising and its effectiveness (less about what message/s we put in and more about how people respond) that inspired the birth of planning at the agencies BMP (under Stanley Pollitt, pictured above) and JWT (under Stephen King) is introduced. The bulk of the book is about the first planners and the contribution they made at those agencies in the late 60s and 70s. Finally, changes and developments in planning since 1980 are discussed.

It seems fitting to the topic that the research for the book was qualitative in nature - the authors conducted depth interviews with a number of those early planners as well as friends, family and associates. In addition, the theme of collaboration carries through into the way the book was published, via crowd-funding and Unbound. The tone is very different to most business books - informal, anecdotal, reflecting those early planners who 'made it up as they went along.' The over-riding feeling about account planning that comes through is that it's about a mindset, not a process, and it all starts with people, not with data points.

While I appreciate that the authors didn't aim for a LinkedIn-style '10 Lessons We Can Learn From Planning Pioneers' approach, the anecdotal nature of the book means that it is very wordy - at 350 pages plus. I did sense rather a lot of repetition, and I felt that the text could have benefitted from further editing. Perhaps a few more specific examples of contributions to individual commercials and campaigns would also have been of interest.

It was good to see the photos of some of the cast, and the book token and book mark from Unbound were a nice touch. A round of applause to the authors and contributors for bringing all these fascinating anecdotes together.
Posted by Sue Imgrund at 12:35 No comments: 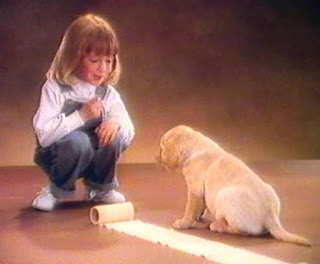 I'm currently reading a book with the intriguing title 98% Pure Potato , which is a history of the origins of Account Planning through interviews with its pioneers - the early planners in the agencies JWT and BMP in London in the late 60s and 70s.

So far, it's a fascinating, if rather wordy, glimpse into the past, with plenty of quotes from those who were there. I started my career in the 80s, so many of these people were known to me, by reputation if not personally.

One theme that comes out strongly in the book is the belief that those early planners had that advertising should connect, human to human. This is described by Leslie Butterfield as follows: It was a kind of 'cuddle up to you' model of how advertising works and I think that advertising was something that could win people over through affection, through charm, through nudging, through cuddling ... put your arm around the consumer, entertain them, involve them, engage them, persuade them, but do it gently, do it with charm, do it with panache, not a bang over the head.

I sometimes think that as advertisers, we have forgotten this. Our attachment to data means that we've become detached from the human side. The early planners crunched plenty of data, but they also talked with and listened to hundreds of people in sitting rooms over sandwiches, biscuits and cups of tea - or even wine in the evenings. In a flood of nostalgia, I dragged out one of the first contacts I had with advertising as a potential career, in the form of the Oxford & Cambridge Careers Guide - this is from the early 80s.

I remember clearly reading the piece by another Lesley - female this time - Lesley Nevard, who was an Account Planner at BMP. What is fascinating to read here is this, unlike the book, is not coloured by decades of hindsight - this is as it was back then.

I hope it's readable - it definitely inspired me in my career choice. I do wonder what Lesley Nevard is doing now. 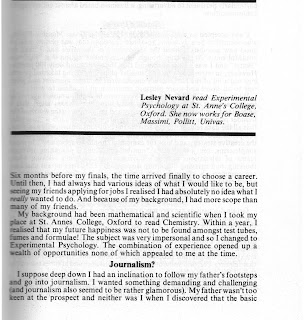 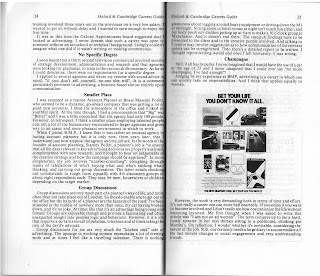 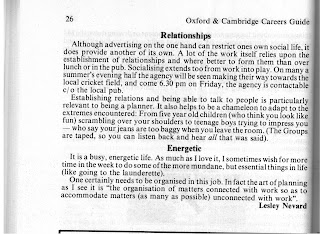