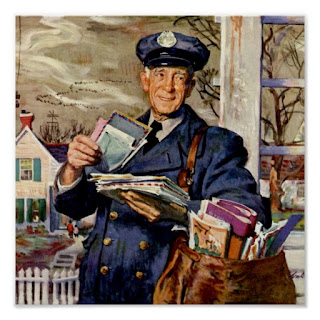 I like ideas that aren't brand sparkly squeaky new, but make use of existing products, techniques or networks, with a new twist.

We hear a lot about the Connected World today, but in 2017, half the world's population will still be 'unconnected' - that is, not online. While many people may now argue that 'online' and 'connected' are not necessarily synonyms, elderly people in particular may find that they feel excluded because they haven't got all the latest technology.

With elderly people in mind - and that's almost a quarter of Japan's population - there's an interesting new initiative coming from a partnership between Japan Post, IBM and Apple. It's an extension of the Japan Post Watch Over service, in which the friendly local postman checks in daily on older people and lets the relatives know if anything is amiss.

A new programme has now been developed, whereby older folk can be given an iPad, pre-loaded with basic social and health apps. This can be used as a 'senior support service' to co-ordinate and remind people about medical appointments, household maintenance, grocery deliveries, taking medication, as well as the nicer aspects of life, like chatting to the grandchildren.

And who tutors the recipients in how to use it, and checks now and then that they are getting the most of it? Again, the friendly local postman (or woman.)

Communication meant letters when the elderly generation was growing up, so who better to coach and support older people with the new technology than the trusted employees of the post?
Posted by Sue Imgrund at 16:38