The story of the emperor's new clothes 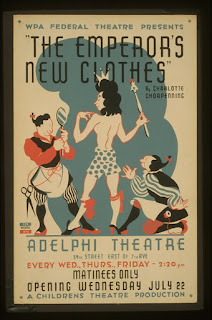 The expression 'story-telling' is one that has crept into branding and business over the last few years (usually referred to as 'Story' in the singular with a BIG Capital Letter by those who think they are in the know). I've nothing against it - I have been known to tell a story or two myself. I think it's a lot to do with the massive change in the way people use media, and the vast choice of media available.

Brand communication has moved from (more of) a message/receiver model - although tell me people never used to discuss ads in the pub - to something more akin to a multi-media network. This was all brilliantly illustrated by The Guardian a few years back.

I say 'more of', because I think story-telling has always been an element of brand communication. Creative people in agencies have an instinct for story-telling: look how many of them become novelists and film directors. Back when I started in advertising, long-copy ads were still in vogue. I was involved in the development of some super ads for The London Philharmonic - the kind of posters that would fill up a dull minute or two waiting for a train. They were about the lengths the musicians went to to perfect their art - for example, the trombonist refraining from kissing his wife a few days before a performance in case of damage to the embouchure.

Stories are fine. Where I do object, however, is how some practitioners create their own (trademarked) tools and models, and sell these to the unsuspecting marketing community, like a dodgy lamp in the bazaar. These tools and models are invariably backed up with a reference to an academic, in all likelihood Joseph Campbell, along with numerous examples from the world of Disney, fantasy and Sci-Fi (Star Wars, Lord of the Rings and Harry Potter being particular favourites). Suddenly 'Story' becomes a problem-solving tool for business.

I'd love to know how many of these tool-and-model-touters, the people who go on their seminars and the Corporate Storytellers (yes, really - Procter & Gamble have one) have actually read Joseph Campbell.

I've read The Hero with a Thousand Faces and found it fascinating. But it's certainly not a quick skim-through, at around 400 pages. I have studied psychology and read a lot of Jung, and I did not find Campbell's book an easy read. But it contains many, many beautifully-written and thought-provoking passages. Like this:

The unconscious sends all sorts of vapors, odd beings, terrors and deluding images up into the mind – whether in dream, broad daylight, or insanity; for the human kingdom, beneath the floor of the comparatively neat little dwelling that we call our consciousness, goes down into unsuspected Aladdin caves. There not only jewels but also dangerous jinn abide: the inconvenient or resisted psychological powers that we have not thought or dared to integrate into our lives. And they may remain unsuspected or, on the other hand, some chance word, the smell of a landscape, the taste of a cup of tea, or the glance of an eye may touch a magic spring, and then dangerous messengers begin to appear in the brain. They are dangerous because they threaten the fabric of the security into which we have built ourselves and our family. But they are fiendishly fascinating too, for they carry keys that open the whole realm of the desired and feared adventure of the discovery of the self. Destruction of the world that we have built and in which we live, and of ourselves within it; but then a wonderful reconstruction, of the bolder, cleaner, more spacious, and fully human life – that is the lure, the promise and terror, of these disturbing night visitants from the mythological realm that we carry within.

Now, compare that description of the unconscious with a 'framework' that I have seen presented on the internet as a simplification of Campbell. This 'storytelling framework' will (purportedly) help you to develop advertising:

A hero overcomes an obstacle in pursuit of a treasure, aided by a mentor.

Now then, just substitute the following words and phrases in the sentence above: