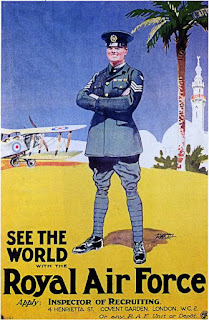 One major anniversary in 2018 will be 100 years of the Royal Air Force. Those who're aware of my author-ego will know I have something of a soft spot for the RAF and I thought I'd kick off the New Year with a look at how the recruitment advertising for the RAF has reflected cultural changes across the last century. Well, actually, it's an excuse to go rummaging through some wonderful old ads. 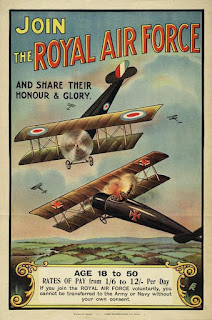 When the RAF, born out of the Royal Flying Corps, started, it was all about honour and glory. The beautiful poster above looks and feels every bit of its hundred years old, from the typeface to the sentiments expressed. The 'See the World' poster is probably a little younger, and introduces a perennial theme for the RAF - the exciting possibilities and adventure that such a career opens up.

By 1941, in the middle of the 2nd World War, things were getting grittier and direct on target. There was no doubt here about what was required and what was the task that lay ahead. This image is courtesy of the very magnificent Aviation Ancestry - but I will issue a warning straight away - you are likely to be some time if you visit the site! 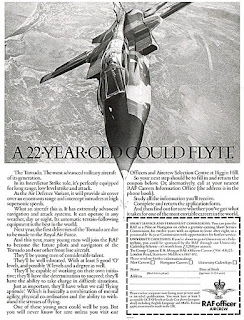 Moving into the 1970s and 80s, the promise of excitement and adventure was still writ large. The advert featuring a Tornado is also care of Aviation Ancestry. And changes in society were reflected too in the RAF - or maybe the services actually influenced some societal changes? The advert below is courtesy of the Advertising Archives: 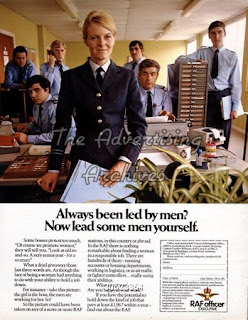 As the century due to a close, the recruitment advertising went into full James Bond action mode, as seen here in a 1997 TV ad:

And now, almost up-to-date, one of the ads from the 'No Ordinary Job' campaign:

Being the youngest of the services, and being born into the golden age of poster advertising, the RAF does sometimes feel more like a brand than the other services. I feel that the RAF Roundel has a lot to do with that - one small symbol that says so much, so powerfully.