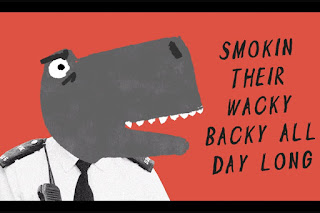 I've noticed that my blog has become slightly serious and grumpy round the edges of late. And that it's been ages since I've done what I used to love doing - finding an ad that's got a really good idea behind it, and singing its praises.

Well, here we go - two campaigns via the agency Quiet Storm as part of the Create not Hate initiative. This has the aim of bringing more young people from ethnic minority backgrounds into the creative industries.

The "Racist Dinosaur" campaign was created by Jet Harris and Le'vaughan Smith, who are both 16, and I think from Merton, which is my old stamping ground in South London.

Then there's another great idea - "Racism is ridiculous" based on a "What If ...?" question - in this case, what if dogs were racist? 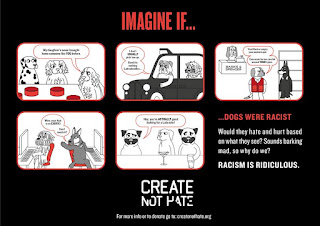 Barks & Spencer is inspired! This campaign was created by 22-year-olds Finton Hurst and Mariana Gonzalez.

What do I like? Well, where do I start? Both campaigns are packed with insight, cleverness and mischievous humour. And they are both based on a simple idea, the "What If?" question in one case, and the idea that racism is a dying relic from the past, summed up by the clever endline "Make Racism Extinct" in the other. A recipe for effectiveness.

My hope is that the ad agencies will encourage more of this, more doing and acting. And less making pompous statements about giving people voices and letting them see themselves in ads (which is incredibly patronising), issuing sanctimonious reading lists and ticking boxes to keep the inclusion and diversity police happy.