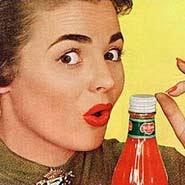 Apparently, "bizarre sexist adverts" are doing the e-mail rounds in the pre-Christmas flurry. The Times has pulled out a few of these to compile a "Top 10", on top of the 1001 "noughties" Top 10s that are already hitting the press faster than you can say "Millenium".
But back to the sexist ads. There are none I'd call truly bizarre. Most are quaint, not terribly good and nothing for any right-minded Mad Woman to get herself in a tizz about. I actually thought the one for Dormeyer was pretty clever and could work today if it was for beauty and fashion items rather than household appliances - with a heavy dose of irony, obviously!
That's the thing. Terribly earnest young ad people seem to think all this stuff was for real. I'm sure that much of it was tongue firmly in cheek, the Tipalet ad being a prime example. Can anyone tell me how this is in any way more "bizarre" or primitive in its idea than the Lynx/Ax campaign?
Posted by Sue Imgrund at 15:23