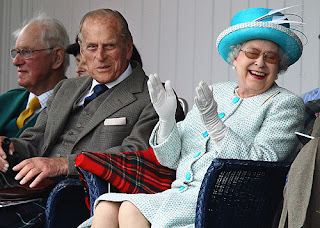 You’ve found a really nice photo of the Queen and Philip; they both look as if they are having fun. I can’t remember seeing any photos of her wearing jeans, but she does where jodhpurs and the occasional trouser suit.
We have always resisted the urge to stand around at Buckingham Palace but a couple of years ago we did join with the crowd waiting to catch a glimpse of her when she visited Sherborne in Dorset. We were surprised at the air of excitement and anticipation. The crowd went mad when she stepped out of the car.
If you do go along please give her an extra wave from me!

Just getting ready to set off now!