As we're right in the thick of holiday time, I thought I'd look at a couple of ads associated with airports. The first one is First Flight, Heathrow's first ever TV ad, to celebrate the airport's 70th birthday. Using the tried and tested John Lewis formula of a cute kid and music to pull at the heartstrings, this is the story of a first flight through the eyes of a little girl with an owl trolley and a very fetching pilot's cap.

It's a watchable enough ad, but I'm not sure it really captures the magic in the way it should. Is flying still as magical as it was when I was a young lass, when we'd go to the Queen's Building as a day out, just to watch planes take off and land? This film doesn't show anything of the crowds, the delays, the mangled and lost luggage, the confiscated drinks and children's scissors (I speak from experience ...)

But, OK. I still think it's a brave thing for Heathrow to do, especially in these times of terrorist threat. And it's marvellous to hear that Bowie track again.

My second example is something I saw on my way back from a week away on business, when I arrived back at Frankfurt. An ad for the Bad Homburg Casino in the baggage hall. I hope my pictures will do it justice: 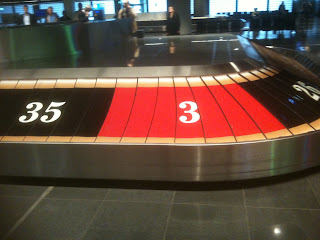 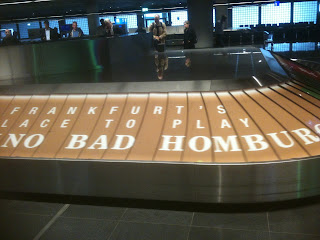 A baggage carousel disguised as a roulette wheel. OK, again the cynical may say that putting your luggage in the hold is a bit of a gamble, but I don't care.

After a long and hard week away, this idea, involving no apps or digital cleverness simply made me smile.

Heathrow Airport does Wonderland! It did pull at my heart strings a little mainly because of my two little granddaughters and their recent trip to the UK. Unfortunately, we all know it is a complete fabrication. Think screaming kids (not MY grandchildren, they were perfect little angels), noise, confusion, grumpy airport staff, and you might come a little closer to the truth!
The Bad Homburg Casino advert is inspired!