Why can't we live together? 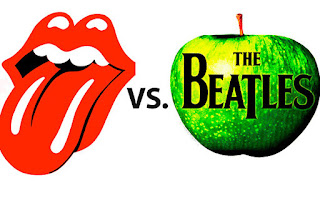 At the end of 2019, I blogged about reconciliation, in the hope that 2020 might be the year, both on the political front and in the world of marketing, that we might be able to reconcile differences, establish common ground and move forward on this basis.

Unfortunately, the common ground that came upon us was something we hadn't wished for - a rather nasty and persistent virus.  The first couple of months did see some pulling together against adversity, which I think gave me renewed hope in humanity and what we can achieve if we work with what can unite us and leave divisiveness behind.

But unfortunately, the old divisions have crept back and new ones have come to the fore. And yes, I do believe that without differences and a certain amount of friction and tension, there's no progression, but in the world at large as well as the microcosm of marketing, there still seems to be a lot of black and white thinking going on. 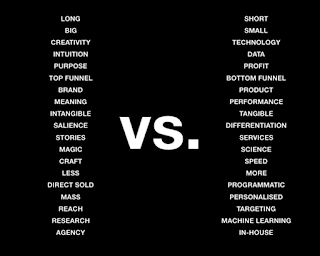 Binary debates in marketing Source: Martin Weigel
Rather than aligning myself to one camp or another, I've learned along the way that the truth about these things usually involves "a bit of both", whether its human and machine, purpose and profit or brand-building and activation.
There a super article from Tom Roach here, which looks at the false choice between long- and short-term marketing or brand/performance. The approach is to harmonise short-term sales and long-term growth, with "share of search" as a promising metric to predict market share that both camps (if we really have to have these camps) can get behind. Thus selling "both immediately and forever" as Jeremy Bullmore put it.
Mark Ritson has summed all of this up rather well in his article about "Bothism" - the rare capacity to not only see the value of both sides of the the marketing story, but actively consider and then co-opt them into any subsequent marketing endeavour in an appropriate way.
And yes, I do have The Beatles and The Stones, Oasis and Blur in my music collection. As well as a lot of other weirder stuff, which is another story.