Let your planner be your guide 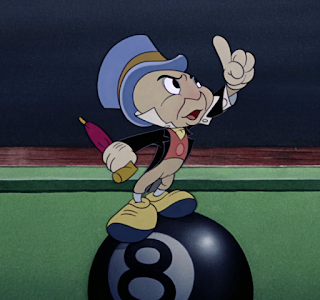 Account planners and strategists do love a discussion about what they should be called and what they do. I have taken part in entire day meetings and workshops devoted to this topic. In the end, we always go back to doing what we always did, whatever our job title.

There's a book coming out soon (I hope) by John Griffiths and Tracey Follows called '98% Pure Potato: The Origins of Advertising Account Planning' which is 'the story of how account planning began, told by its pioneers.' There's a good blog post here from the authors about how the name 'Account Planner' came to be, some time in the summer of 1968 at J Walter Thompson.

Reading through that inspired me to reach for my copy of 'Pollitt on Planning' to see what Stanley Pollitt himself had to say on the subject. His idea was to bring researchers out of the backroom and assign them to particular accounts, working alongside and on equal status to the account managers. This was in contrast to being 'closeted in their own little backrooms, called at on the account man's whim, dusted down and asked to express some technical view about some unfamiliar client's problem.' The key thing here is that these new 'account planners' would be assigned to specific accounts - or brands - which they would have a responsibility for.

As to what that responsibility should be, Pollitt makes an interesting analogy: This new 'researcher' - or account man's 'conscience' - was to be the 'planner'.

And here, I think, is the essence of what planning and planners are about: doing the right thing for the brand, inspiring work that works.

The right thing for the brand - not keeping the (human) client happy, not giving the customer what they want, not winning creative awards. And not even propping up the business short-term.

Although any of these things, or a combination could be the means to an end. 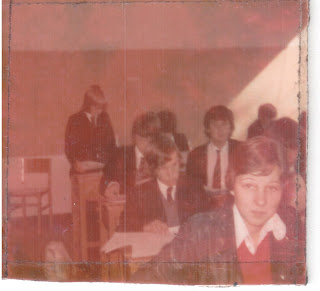 I received a rather plaintive email this week, from one of the founders of FriendsReunited, the reunion-based website launched in the UK in 2000. The email had the dramatic heading The Sunset of an Era and was written in rather emotional terms. Here it is:

In its heyday, before Web 2.0 came along and broke up the party, FriendsReunited was bought by ITV and branched into other media - TV shows, compilation CDs and so on. But once the ubiquitous Facebook started gaining ground, in 2007 or so, the attempts to revive FriendsReunited appeared increasingly desperate. The site was relaunched as a 'memory sharing site' in 2012, trying to capitalise on the human need and interest in nostalgia.

I'm not that saddened by the demise of FriendsReunited. To me it was never really a brand - it was a service that I made use of and moved on. It's telling that Steve Pankhurst talks about it as a 'site'.

Maybe that was the mistake.

Somehow, FriendsReunited was a brand-in-the-making that never quite made it. The elements - reunion, research, true friendship, nostalgia, memories and maybe even Britishness - could, in the right hands, and with a bit of luck, have built up to a brand that could adapt and survive.
Posted by Sue Imgrund at 10:34 3 comments:

After 20 years of a positioning that could be summarised as 'Get sprayed, get laid', Unilever's male grooming brand Axe/Lynx has been repositioned. A new commercial from 72andsunny, Amsterdam features a guy with a prominent nose, a hipster with kittens (of the fluffy rather than the sex- variety), a guy wheelchair-dancing and a catwalk model (male) sporting killer heels. There isn't a bikini-clad babe in sight.

It's a nice-looking ad, and ticks all the 'inclusivity' boxes - except the lack of subtitles for hard-of-hearing, as one YouTube wag pointed out - and the message is less about getting the girl and more about 'finding your magic.' 'Find your thing - now work on it!'

Unilever and their agency say it's all about 'inspiring and supporting' young men, and the 'e' word that we know and love from Dove has already been used. Only 5% of men in the UK, according to Unilever's research, agree that they 'feel like an attractive man.' Well, that could have been something to do with the way the question was phrased, but there we go. Unilever say: 'The pressure to conform has gone up. Guys have lost their confidence to express themselves. The moment you show individuality then people get bullied, and this is the big issue.'

Maybe that could be re-phrased as 'the moment you show something that could be construed as sexist, then you get bullied.' I have seen no evidence that Axe sales are on the slide, or that the product is no longer relevant to the target group. What I have seen is plenty of commentary of the sort - how can Unilever promote Dove as empowering women, while producing those awful sexist Axe ads?

But were they? History seems to have been rewritten here. Yes, Axe have produced some notoriously sexist ads (although I always regarded them as tongue-in-cheek) that probably don't belong in the 21st century any more than Benny Hill or Carry-On films. But there have been some brilliant films, too. which have shown how the basic brand idea can be brought up to date and executed in a way more fitting to the values of the day:

This one is over 10 years old and still looks good.

Or this, from a couple of years back:

If I'd been on the Axe team, I'd have asked what was the magic of Axe, what was its 'thing' and tried to bring it up to date. There are plenty of examples of that around - James Bond, Sherlock, Star Wars, even Old Spice.

As it is, I worry they have diluted the magic, or lost it altogether. From moving from sexual attractiveness (which doesn't have to be exclusively to women, by the way) to being a 'beautiful human being'/empowering/building confidence or whatever the idea is now, they have lost the link to the product and the uniqueness of the brand.

In fact, the whole campaign seems to smell a little bit of 'attractiveness to yourself', but maybe that's the method behind the madness - to appeal to the narcissistic generation. 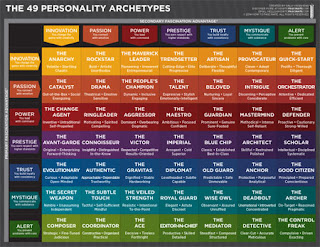 I've never been too sure about the use of the word 'archetype' in a marketing context. As a psychologist, my association with the word is Jungian, and something far more complex than which box you end up in in a Buzzfeed - style quiz.

OK, reservations aside, I do admit that sometimes a 'typology' exercise can be useful in brand positioning work. It's more than just a description of a personality - it  can help describe how people relate to your brand, and maybe gives a tone of voice for the brand communication. In a crowded market it's a way of distinguishing between brands.

I was intrigued to see the 49 Personality Archetypes developed by the How to Fascinate consultancy, led by Sally Hogshead. The consultancy is mainly in the business of personal branding, but of course brand managers also want their brands to fascinate! Sally Hogshead has a background as an advertising copywriter, and has defined '7 Advantages of Fascination' - Innovation, Passion, Power, Prestige, Trust, Mystique and Alert. When these are put in a matrix, the 49 personality archetypes emerge, each with a primary advantage plus a secondary advantage, creating personas as different as The Wise Owl, The Control Freak and The People's Champion.

Similar to Myers-Briggs, you may think. But these personas are less about how you see the world and more about how the world sees you. Each has its own communications style, relationship approach and set of priorities.

I am not sure that this could be applied 100% to brands - and, of course, the questionnaire and algorithm used in the analysis are rightly proprietary, but nevertheless, it's a potentially interesting new way of looking at brands.

Fascinating stuff.
Posted by Sue Imgrund at 14:42 No comments:

Put a tiger in the bank

Brands have long used symbols from the animal world in their logos, names and advertising. Animals are universal symbols, and can quickly convey a host of easily-understood values or characteristics. From the bears on Hofmeister beer and Fox's Glacier Mints, to the black horse used by Lloyds Bank, the Peugot lion, or the Andrex puppy, animals are used to convey anything from strength to softness, to cleverness.

One of the most popular animals used as a symbol is the tiger. My childhood memories include the famous 'put a tiger in your tank' from Esso and Tony, the Kellogg's Frosties tiger. But sadly, the number of tigers in the wild is now far fewer than in those days, with the numbers left in the low thousands. Tigers are on the brink of extinction.

When I published my children's book The Bother in Burmeon , whose storyline involves rescuing a tiger from a most horrible fate as a tiger skin rug, I decided to donate some  of the royalties to a tiger charity, and chose Tiger Awareness.

I am now very pleased to see a great idea from the Panthera conservation organisation: Tiger Royalty.
This is one of those ideas that's just so brilliant and spot-on that I'm amazed no-one has thought of it before - royalties for tigers from all the tiger-inspired brands and products that are produced around the world, an artistic rights fee for tigers that goes towards the funding of Panthera's Tigers Forever Program.

As Tony the Frosties tiger would have said - That's Terrrrrific!
Posted by Sue Imgrund at 16:07 No comments: