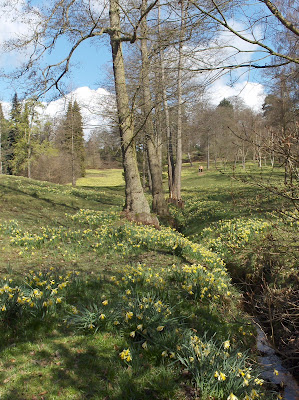 As from today, the days will be getting longer. So, to accompany this meteorological brightening up, I was cheered to read this article by John Parker in Intelligent Life to counteract all those doom-mongers with their "dumbing down."

It is argued that we are now in the "Age of Mass Intelligence" and that, in rich countries at least, there have never been so many educated people. There are more visitors to museums, literary festivals and the opera than ever before.

Now, the cynical and the cultural snobs and the doom-mongers will all argue back: Ah, but those museums themselves are "dumbed-down". "More educated" doesn't mean "better-educated". This is just about the popularisation of culture, surely, not about intelligence?

Do you know what? I don't want to split hairs, nor do I want to get into an intellectual debate about what constitutes high culture or intelligence these days. Along with the book "The Long Tail", this article has brought to my attention just how much choice is now accessible to all of us, in terms of film, reading, music, thought, entertainment, art and culture in the widest sense, if we choose to seek it out. And I believe that only the worst cultural snob in the world could begrudge a fellow human being discovering the wit of Jane Austen via Gwyneth Paltrow, the beauty of Chopin through Classic FM or the splendour of Puccini through Paul Potts.
Posted by Sue Imgrund at 09:34 No comments: 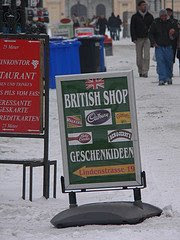 The recent sniping between Germany and the UK over economic policies has stimulated discussion about the relationship between the two nations.

In this article by John F Jungclaussen, the London correspondent of Die Zeit, the author reassures readers of a very British newspaper that all is well on that front (apart from Gordon) and a difference in opinion over something as trifling as the economy won't make a dent in the Germans' unconditional love of all things British (except Gordon).

I wrote a similar article a year or so ago. What occurred to me then is that Germany is not in love with the reality of Britain, but rather in the idea of Britain, as expressed through various archetypes. Some of these are mentioned by Herr Jungclaussen: others can be found in my piece - from Rosamunde Pilcher's Cornwall, to Gaslit London, to British Humour, to Braveheart. But, as the article pointed out, the love does not extend to chavs, teenage girls puking in town centres, hoodies - or now Gordon himself.
Posted by Sue Imgrund at 08:36 No comments:

Let's not join the lemmings... 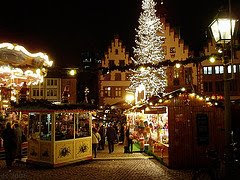 Living 90% physically in Germany and probably 60% virtually in the UK - if my media consumption is anything to go by, I was really pleased to find this blog by Mark Mardell, the BBC's European Editor.

I'm no expert on economics but this seems to sum up for me just why Britain is heading for disaster, while Germany - I hope - will plod steadily onwards. When I first arrived here, twelve years ago, I was annoyed that my credit card was viewed with disdain and distaste, but now I'm thankful.
Posted by Sue Imgrund at 14:00 No comments: 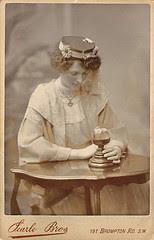 It must be tough, sometimes, being a trend forecaster or a futurologist or whatever, especially when annoying people like me dig up your works for a quick re-visit. I always feel a bit sorry for those people who are quoted as saying that the Beatles would never amount to anything or those who turned down the first Harry Potter manuscript.

But sometimes it's fun anyway to consult an ancient tome of trends and to see exactly what they got right or wrong. I think that Nostradamus probably had the right idea to make his predictions so vague and open to interpretation that he couldn't really be held up for criticism. But 20th Century authors had to be a little more precise. I have a book entitled "Megatrends 2000" which was first published in 1988. While much of what the authors predicted was spot-on, I couldn't resist a smile at a piece singing the praises of the "facsimile machine".

"Facsimile machines empower people everywhere to operate at the individual level...Ever wonder why fax machines have become so popular while high-tech electronic mail is such a slow poke? It is the principle of high-tech/high touch described in Megatrends.
Through the technology of the telephone you receive a fax, which you then rip off the machine and proceed to cut up, photocopy, mark up, and otherwise be physically engaged with - high touch. Also, you can write (or draw) something long-hand and send it over the wires. With electronic mail there is no high-touch, just high-tech."

Oh, dear. This all brings back memories of valiantly trying to collect, un-roll and re-order umpteen pages of rolled up shiny paper spread around the grey office carpet like giant cigarettes. And jammed-up shiny paper. And shiny paper that's inconveniently run out during a 50-page document. Didn't toilet paper used to shiny, too? High-touch? No, thanks!
Posted by Sue Imgrund at 09:06 No comments: 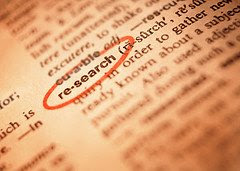 I got rung up by a market research agency last week, which is not unusual. But I decided to take part in the survey, which is. Usually I mumble something about not being able to speak German or hope that they'll ask if I work in Marketing or Advertising. They didn't, this time, so something made me plunge in and answer their questions.

Unfortunately, I didn't answer them very well. Although the questionnaire was well-structured enough and the interviewer perfectly understandable and polite, the questions themselves were nigh-on impossible to answer if one took them seriously.

It was an advertising tracking study for banks , insurance and other financial institutions and most of the questions were asking me to recall not only which financial organisations I'd seen advertising (defined as TV, radio, poster, print, personal direct mail and flyers) for in the last week but also the content of the advertising.

Put on the spot, nothing, but nothing, surfaced except a few logos and snatches of jingles. But I could not honestly say that I had seen or heard these in the context of a piece of advertising in the last week. Yet I know, with almost complete certainty that I have indeed seen communication for banks and the like in the last week: driving along the Hanauer Landstrasse, flicking through the Stern or out of the corner of my eye in a commercial break. It's just that I have long internalised these impressions and added them to my overall inner picture of that brand...and it's something I did not do consciously.

Sixteen years ago, I wrote a long and rather academic paper questioning "Do ads need to be recalled to be effective?". The answer was a resounding No! And yet, I still sit in tracking study presentations and get as excited as the next person when we get a good Awareness Index. I don't like to admit it, but it's true. Sixteen years ago, I wrote that the tide was turning as far as research methodologies go. It's a slow tide. There are some super new methodologies around today which embrace new technology to pick up real-time response to brand communication.

But unfortunately we fall back only too often on measuring what we can and assuming that, because we can measure something, it must be important. And it only took a ten minute interview to remind me that, in doing this, we are only kidding ourselves and probably wasting a lot of money into the bargain.
Posted by Sue Imgrund at 09:33 2 comments: