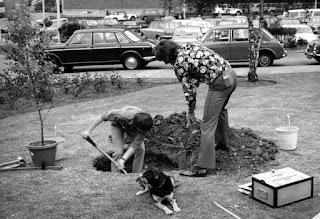 But advertising Concorde never did British Airways any harm.
Posted by Sue Imgrund at 13:10 4 comments: 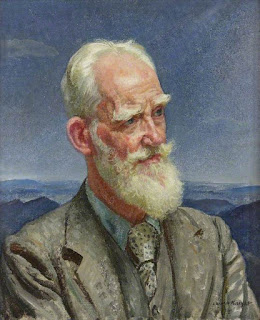 One of the liveliest sections of the Mumsnet Forum discussions is the section entitled 'AIBU?' - for the uninitiated that's 'Am I Being Unreasonable?' There's everything on here from the trivial to the traumatic, and the answers rarely stop at a simple 'Yes' or 'No.' Ideally, I'd guess, one would like to be regarded as a touch unreasonable, but with justification.

On the subject of unreasonableness in the world of marketing and advertising, here is a short article in Campaign from Mick Mahoney, Chief Creative Officer of Ogilvy & Mather, London. It's entitled Being Unreasonable in four easy steps and starts by quoting George Bernard Shaw:

It's implied that being unreasonable is a harder job than being reasonable. The reasonable man 'adapts' where the unreasonable one 'persists in trying.' And not only is unreasonable harder, but you're likely to be met with more resistance at the end, too. If something 'seems reasonable' it'll probably be accepted. It'll do. The boxes will be ticked and we'll move on. (Ugh.)

But will anything change? Probably not.

These days, our obsession with 'seamlessness' and 'consistency' means that we'll feel more comfortable with reasonable ideas. It's about fitting in and following. It's about looking at the past and what worked there to generate ideas for the future.

It's actually about not needing people at all - reasonable, unreasonable or otherwise. It's how AI works.

But shouldn't our ideas be more about standing out, being unique, leading, being first? Using our innately human ability to put things together to create something new?

The Gospel according to Powerpoint 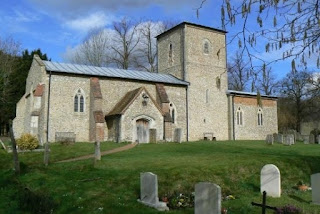 I must make a confession. I am not a regular church-goer, either here in Germany or back in the UK. Having said that, I do have many memories of church from my childhood, and I have to say that most of those are related to what marketing people today would call the 'experience' rather than the 'communication.'

Church-related communication has always been charmingly amateur, in my experience. Amateur in a positive way: not slick, not 'professional', communication that looks hand-made. For all the 'hand-written' and 'hand-crafted' yet carefully designed communication that commercial brands and enterprises put out these days in an attempt to appear authentic, they could well take a leaf out of the local church's poster advertising the Summer Fete, or the parish magazine. It's amateur in the sense that the people producing these communications genuinely love what they are doing.

As for the 'experience' - well, that's quite different, and I'm not in any way alarmed by this inconsistency. My memories of the experience, certainly in retrospect, include feelings such as wonder at the mystery of it all and, yes, awe in its original sense. Whether it's stained glass windows, bells ringing, organ music, polished candlesticks and pews, ancient texts or stories from two thousand years ago, there is plenty to stimulate the mind, the senses and the spirit.

So imagine how I felt when I attended a church service on a recent trip to the UK (not to the beautiful church pictured above, I hasten to add) and heard the language of the boardroom and the management consultant. Now, admittedly, the management types pinched the idea of a 'vision' from the spiritual types to start with, but it was rather alarming to hear it played back in the context of a 'Vision Statement' for this particular church. Not just that, but talk of priorities and process, enablement and empowerment, roadmaps and workshops. I didn't actually hear mention of Change Drivers and KPIs but I suspect they may be part of the package.

My view of the beautiful stained glass windows was somewhat obscured by a series of posters depicting a number of 'pillars' relating to the 'Vision', which looked as if they had come from a Powerpoint design-your-own-strategy-presentation background format.

Maybe I'm over-sensitive and others less close to the world of business will welcome this more down-to-earth approach (is it?) - and maybe God moves in mysterious ways - but I would rather leave the bullshit bingo in the boardroom.
Posted by Sue Imgrund at 15:41 No comments:

Are your roots showing? 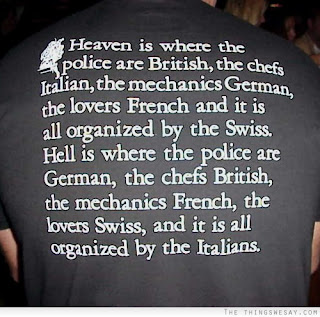 A long time ago, when I was still in the UK and working on the British Airways account, they set up a fascinating piece of international 'Britishness' research which looked at impressions of Great Britain in a number of countries around the world. This was qualitative research, and people in each country were asked to imagine a typical British town and what the characters were like there: policeman, doctor, teenager, manual worker and so on. It was rather like that 'Heaven and Hell'  joke, one version of which you can see above. And - surprise, surprise - there was little consistency in the way Britain was seen around the world - sweet and quaint in the US, compared to pushy and arrogant in Australia.

I've just read a long article in The Guardian about the rise of nation and place branding, which appears to be a booming business. Not just from the point of view of attracting tourists, but for governments to attract investors, workers, students, or to allocate resources and increase esteem generally internally and externally, much as you would use a Brand Purpose or Position.

It's not an easy job. Apart from an uneven playing field to start with (as in the differing impressions of US and Australia in the example above),  just think how quickly the overall impression of a country can change due to a change in its leadership. Obama's USA and Trump's USA - worlds apart. Or how a personality associated with a country or place can make or break impressions. Or how a natural disaster can overshadow everything. The article quotes Naomi Klein: Diversity and debate are the enemies of branding. Is it folly to try and reduce something as complex and multi-faceted as a place to a mere brand?

As mentioned in the article, Institute for Identity are having a good try. Their work sounds like a dream job - travelling around, getting the feel of the place, talking with the people, everyone from historians to lace-makers to film-makers.

And even if it seems a step too far to attempt to distill an entire country with all its dynamism, history and diversity down to a slogan and a logo, in these days of globalisation it's increasingly important for brands to be unique and authentic. And part of that has to come from the provenance. How has where the brand came from, where it was founded, informed its purpose and values? Instid have some useful tools and techniques on their website for getting a clearer understanding of a place - through the intellect, emotions and senses.

For brands, as for people, it's important to never forget where you came from.
Posted by Sue Imgrund at 10:19 6 comments:

Films and songs are constantly being remade or re-recorded, so why not commercials? The now defunct Yellow Pages did it a few years ago, and I've recently seen an excellent new example from Xerox.

Now, I must admit that, growing up on this side of the Atlantic, I've never seen the original film from 1976, in which Brother Dominic has a little help from Xerox to achieve 'a miracle.'

More than 40 years later, so not to go the way of Kodak, the brand Xerox has to re-invent itself as going way beyond photocopiers, in order to stay relevant in the 21st century. So the new campaign - sorry, platform - 'Set the Page Free' has been created. The 500 copies must now be translated, personalised, shared around the world and so on.

By taking on where the old commercial left off, Xerox stresses its pedigree, trustworthiness and reliability as well as its innovative new side.

Sometimes the best - and most effective - creativity isn't about creating something completely new:

It's been a bit of a week for monks. Here in Germany (Hessen) we had a public holiday to celebrate 500 years of the Reformation. One of Playmobil's best-selling lines has been the Martin Luther figure.

But probably the strangest Martin Luther-related packaging that I've seen is this. I may be wrong, but surely tomatoes had not yet been brought to Europe in Martin Luther's time? Or does this celebrate the 500th anniversary of that event, too? 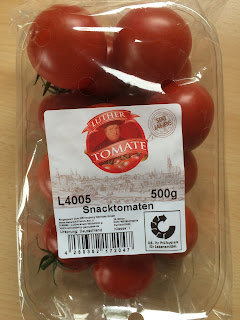