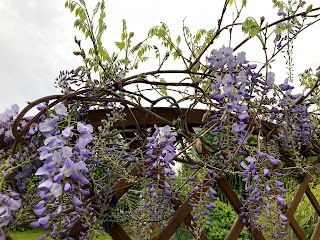 Around a year ago, advert-wise, we were at peak “we’re here for you” mode with all those interchangeable COVID commercials. One year on, and there’s a quite different mood on our screens, if not in real life yet, at least in my part of Germany.

KFC are back to licking fingers, while Wrigley’s Extra Gum has got birds, bees, dings and mojos buzzing all over the place.

Then there’s Lynx who have gone back to their roots and reinterpreted “The Lynx Effect” for the post Covid world, in a sensory celebration:

And my favourite, from Guinness - beautifully on-brand, with a strong insight that when you’re longing for something (or someone) you see it (them) everywhere you look:

I am sure there are plenty more, too, even if I must admit that I am still in the “confused” mindset, brilliantly portrayed by Burger King. Especially when it comes to the absurd and contradictory travel rules and regulations I’m going to have to navigate on my forthcoming trip to Blighty.

The continentalisation of the UK 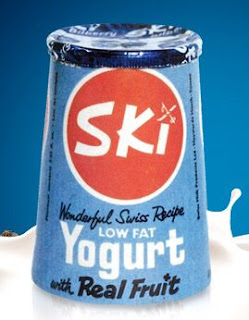 When I was a small child, in the 1960s, people spoke about “The Continent”, meaning mainland Europe. A person, a foodstuff, an attitude, was described as “continental”, in a sligtly disapproving tone,  meaning unusual and a little racy on the one hand, but “not quite what we do around here” on the other.

From an early age, I was fascinated by “The Continent” and all the treasures it might hold, approved-of or not. I blame Caroline and her Friends. For those who’ve never had this delight, Caroline was a bossy little girl accompanied by a menagerie of dogs, cats (domestic and Big) and a lone bear. This motley crew got into all kinds of scrapes, going camping, on ski holidays, or touring around “The Continent” - stuffing themselves with spaghetti or Belgian Frites, hurling Dutch cheeses around or playing Alphorns. I have imitated much of this behaviour throughout the course of my life. 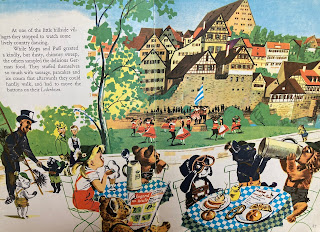 Some of my earliest food-related memories relate to finding unusual brands and products in slightly obscure places. There was this cafe and health food shop just down the road from us, for example: 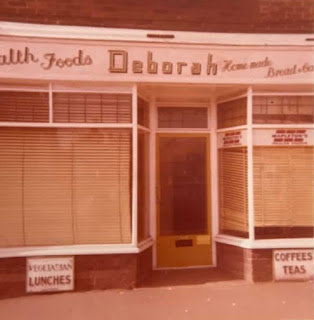 Deborah’s was a vegetarian cafe and sold Birchermüsli as well as breakfast products such as Frugrains - which I can still taste - datey. 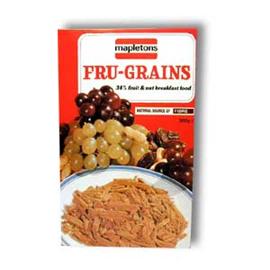 It wasn’t long, of course, before muesli became big business in the UK, with the launch of Alpen in 1971. Ski yoghurt - another “continental idea” which took a while to catch on, had been launched in the 1960s.
As well as the quirky Deborah’s, I remember the glorious smell of coffee roasting in a shop called Brimson’s in Camberley, and the first time I tried a croissant (from a “Continental” bake shop in Reading) - all very Proustian. Then there were the expeditions to a “delicatessen” in Ascot, mainly so my mum could buy the products she remembered from Canada - Betty Crocker and Aunt Jemima. This wonderful emporium sold exotic cocktail snacks, such as ROKA cheese biscuits. I see the packaging design has hardly changed, although I think they used to come in a tin.
All this continentalisation culminated in a coach trip around Europe, maybe following in Caroline & Co.’s foot- and pawprints. Here, I got to know even more continental culinary delights (and some not so delightful) as well as duvets, dirndls and dobra veče (yes, the tour ventured into what was then Yugoslavia).
I’ve now finally booked a trip back to the UK, the first since we became properly Brexitted.
I’m hoping that Britain won’t have become decontinentalised as far as food and drink goes, anyway.
Posted by Sue Imgrund at 11:37 No comments: 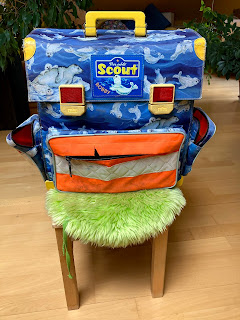 Some of what I find while rummaging through my Retrowurst archive from the early 2000s could have been written yesterday. This month’s article, orginally written in May 2003, definitely couldn’t have been. They say that nothing throws the passage of time into sharper relief than having children and boy, that shows here. At the original time of writing, my son was 2, and not yet in Kindergarten. He’s now a chunky, beared six-foot-plus 20-year-old. There is precious little mention of technology here, and it’s worth bearing in mind that I had only purchased a mobile phone one year previously - a Nokia 6310. My son wouldn’t be getting his first for another 10 years.

Read on for a glimpse into a quaint, vanished world of childhood:

I have just come back to Germany after a week in the UK and have been struck by the difference between the UK and Germany when it comes to Marketing to children, which is the theme of this month’s Extrawurst.

Kindermarketing is a term that is almost unheard of here - in fact, when spoken, it is in very hushed terms and the American-English euphemism of ‘Marketing to Kids’ (normally seen in Comic Sans typeface, often with a ‘z’ replacing the ‘s’) is used. Of course, we do this in the UK too, and I’ve often wondered whether the usage of this term calms our conscience a little - ‘Kids’, especially with a ‘z’ conjures up cartoony figures with skateboards and baseball caps worn at odd angles who certainly seem streetwise enough to be marketed to, while ‘children’ evokes visions of Janet & John in Startrite shoes.

Whatever we choose to call it, markets and marketing with the under 12s in mind are simply less developed here in Germany. The most obvious manifestation is maybe clothes. In the UK, you can walk into Mothercare, Woolworths or M&S and it is impossible to find a pair of pyjamas or a T-Shirt without Bob the Builder or Barbie on it. ‘Traditional’ means Mickey Mouse. In Germany, it is the exception to find such things. Right up to the age of about 8, sweatshirts (if they have a design at all) may have a picture of a Teddy Bear (NOT the Disney Winnie the Pooh or even Paddington, but an unknown, unbranded Teddy) or a pony (no, not one of those pink, lilac and turquoise horrors, but a real, brown pony). In the supermarkets in the UK, the shelves are full of child-orientated products, be it breakfast cereals with marshmallows in, special small bananas branded Blue Parrot Café or similar by the retailer, bubble-baths in every imaginable fruit flavour or birthday cakes representing every TV character you’ve heard of. And this is on top of everything to be found in the traditional child categories such as sweets and toys. In Germany, these things barely exist. In a quick scout round the supermarket today, I found only a modest display of cereals (mostly Kellogg’s), certainly no fruit specially packed at all (let alone for children), one rather unimaginative children’s shower gel and only one cake (a deep frozen thing) that was child-orientated.

Children’s television does exist - indeed, there are whole channels devoted to it, but there are very few original German programmes. Most of it is imported from the US and UK, with such series as Sesame Street, Tweenies or Teletubbies dubbed into German (although with the latter, it’s questionable whether this is worth the production costs!) for the younger ones and then the usual cartoon offerings for school-age children. However, especially for pre-school children, there simply isn’t the structure and (dare I say it?) educational value that you get in the UK. The programmes are thrown together, with no link with a relatively educational programme for under-5’s followed by a loud action cartoon for over-7’s.

It does seem rather a shame that the country that produced such children’s classics as Struwelpeter and Grimm’s Fairy tales is now rather pedestrian in terms of children’s books. While books for pre-school children in the UK tend to be very colourful, imaginative and often funny, German books for this age-group tend to fall into two categories: the dreary realistic and politically correct (typical is a book I got out of the library recently for my son, who is nearly 3, on rubbish and recycling!) or nostalgic over-sentimental (woodland creatures and elves).

Now of course, there is a reason for all of this, which occurred to me when I was talking to a friend of mine, a Doctor with boys aged 3 and 4. She said that it is all to do with the German belief that childhood innocence is ‘sacred’ and there is a strong urge to preserve and protect this innocence for as long as possible. Once I thought about this, everything seemed to fall into place. This is the reason that miniature adult or teenage clothes, such as denim jackets, are not overly popular here for babies and toddlers, who are kept in woolly romper suits for as long as possible. This is the reason that, for a child’s birthday party, a mother will bake cakes herself (with maybe a few Smarties in the icing being the only concession to commercialism) rather than buying a ready-made Thomas or Barbie cake. This is also the reason behind the school system, where, although children go to Kindergarten from age 3 to 6, they do not begin to learn reading and writing (elements of the cruel adult world) until they go to school at the age of 6. Interestingly, most children are only at school until lunchtime right up to age 19. Someone (the mother) is expected to pick them up, give them a cooked lunch and help them with their homework. It also explains the strange (to me) phenomenon when I first came to Germany of interviewing ‘young students’ for trainee posts who were of an age where they’d be running a company in the UK!

The implication of all of this for brands and marketing is not that we should give up on marketing to children in Germany but rather that we should acknowledge the cultural differences that exist and be a little careful not simply to transfer concepts and ideas that work in the UK. Although the job is a little harder in Germany, it is interesting by virtue of the challenge that it presents. Rather than falling back on the idea of character merchandising, perhaps we need to develop real concepts and new ideas that appeal to children for their own sake, rather than just a quick ‘sell’ through associating with an existing character. Maybe the dearth of German children’s characters provides an opportunity for a brand to create something new. And overall, the key is that the ideas have to have integrity. For example, there is far less ‘fast food’ in Germany - while they may not be wearing scaled-down versions of adult clothes when they go out to a restaurant, the children’s menu in most restaurants offers scaled-down versions of real food (Wiener Schnitzel, Spaghetti Bolognese, grilled fish) rather than the ubiquitous Chicken Nuggets that one finds in the UK.

Another huge opportunity that I see is for someone to launch a range of children’s toiletries here with the pre-school 2-6 age- group in mind. As long as it’s made absolutely clear in which re-cycling bin to put the containers after use and what precisely will happen to them as they are re-processed, it will be a winner.

Thereafter followed a deluge of yukky gendered monstrosities in children’s books, clothes and toys - largely US and UK-driven. It never quite reached the sparkly, glittery, tweeness of those markets, although even IKEA and Aldi were at it. The pendulum is now swinging back, and I’m pleased to see that the German belief in sanctity of childhood stands pretty well firm.

Although one rather sad consequence is that those dreary realistic and politically correct children’s books now seem to dominate the UK market, too.