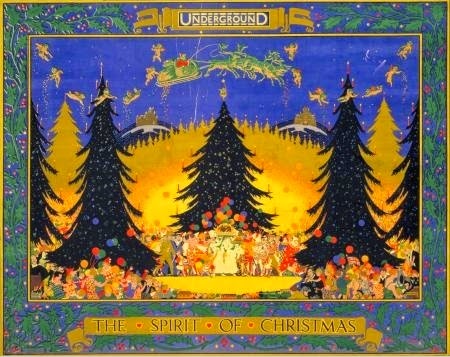 I'm not too sure how much of the "communications content" that I've been involved in over the last 30 years will be around in 80 or 90 years, if any of it. So let me take the opportunity of showing you some of my all-time favourite Christmas ads. They're all London Underground posters from the 1920s and 1930s - a less throwaway age - which I am sure did their job in their time, as well as brightening up people's days as they struggled from Hamleys to Fortnum & Mason. Above is a 1925 poster by Richard T.Cooper. 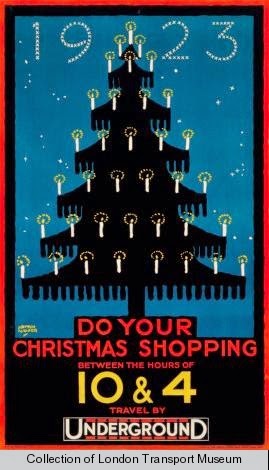 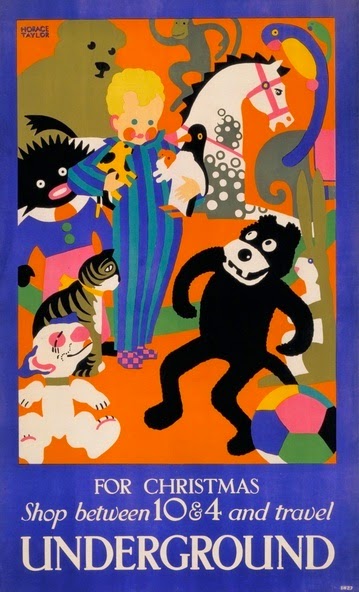 Clients had important messages back in those days too, of course, but no-one seems to have been insisting that the visual communicated the message as well as the copy. These examples are from Austin Cooper, 1923 and Horace Taylor, 1924. 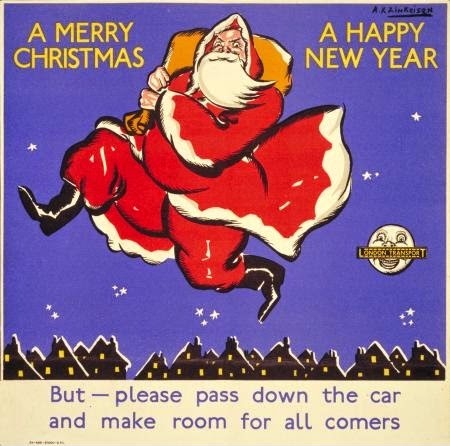 Coca Cola didn't have the monopoly on the red-suited Father Christmas in the 1930s. This 1934 poster is from an artist named Anna Katrina Zinkeisen 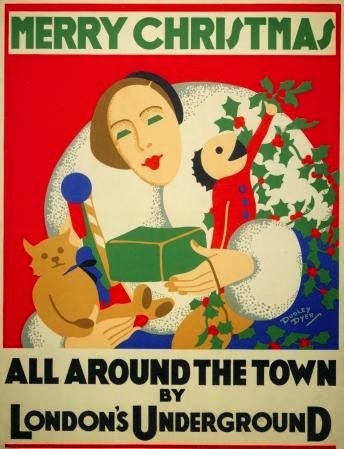 And finally, from 1932, Dudley Dyer's Merry Christmas all around the town!

Charity Past, Present and Future 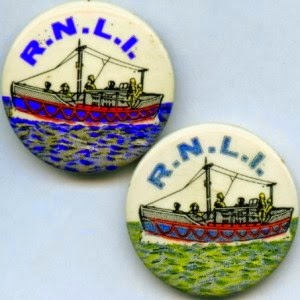 My memories of charity giving from childhood centre around coins and things - collecting boxes for the Lifeboats being rattled in the town, poppies or Queen Alexandra roses to pin on your coat, my RSPCA and PDSA badges, the Oxfam cards my parents bought each Christmas, putting pennies into a life-size model of a Guide Dog for the blind, raffle tickets...

These days, giving to charity has become not just easier to do, but easier to shout about, too. Buttons on your browser instead of your coat, crowdfunding platforms, Gift Aid, posting your donation on Facebook, PayPal links, timely emails whenever a world disaster occurs and all the rest.

And then there are all those big behavioural campaigns where you can be a walking awareness-raiser, from Movember to No Make-Up Selfie to Ice Bucket Challenge. These have come in for criticism on one side from those who say such actions trivialise the issues that they are trying to create awareness for, and find something sinister in what they see as "branding a disease." And the critics, on the other side, are dismissed as cynical killjoys with a bah, humbug mentality.

It's difficult to tell whether people are actually giving more to charity these days, or whether they are just talking about it more. There are some interesting stats from the Charities Aid Foundation, here. I must say that I was surprised to see which country shares first place with the USA in the World Giving Index.

The World Giving Index is not just about donating money. It also include the elements of giving up time and helping a stranger. And this must be the future for charities - using the possibilities of technology to encourage people to donate not just money, but time, skills and other intangibles. There's a super article by Lucy Aitken of Contagious with some great examples of just that, here.
Posted by Sue Imgrund at 10:38 2 comments:

A few years back, the world of online and offline/bricks and mortar retailing had a definite vs between the two factions, presented as an epic duel, swords unleashed, between the old guard and the young upstarts.

But a mediator has stepped in and changed all that. And this mediator takes the form of SmartPhones and other mobile devices. The trend now is that it's not either/or, but both and better. Ads from online retailers that criticise the bricks and mortar world - and vice versa - look dated indeed.

A brand that characterises this meshing of the physical and digital retail worlds perfectly is Hointer which recently won the Most Contagious Start-Up Award. Hointer is a technology platform that enables bricks and mortar retailers to leap into the brave new world where physical and digital are meshed together. As founder Nadia Shouraboura says: "Now it's time to bring digital and physical together to make it spectacular."

To me it's a metaphor for progress and creativity in all fields: reconcile two seemingly opposing factions and create something brilliant. The Whoosh Fitting Room in the video above is certainly evidence of that!
Posted by Sue Imgrund at 12:09 2 comments: 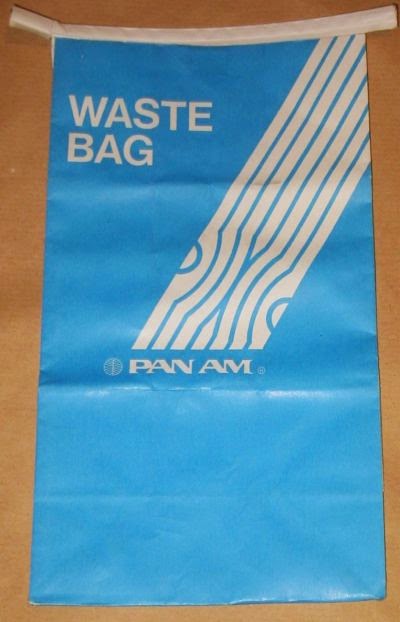 I've just read an amusing article from The Economist about euphemisms in marketing. It's about those products that most of the human race need at some time or another but we don't like referring to them - or the problem they solve - in polite company, or seeing lurid demos of the product's efficacy on our TV screens while we're eating.

I've never worked on the SanPro market (as we referred to it in the UK, aka 'feminine hygiene') but I have noticed that there's a bit of a movement away from the cliches in recent advertising, to the "heavily emotional and empowering" or to the "blunt and outrageous." But in other areas, twee euphemism still reigns. Nappies/diapers for school age children are called "sleepovers" or "pyjama pants."

I wonder, with the increasing number and purchase power of over 60s, whether we'll see a surge in acceptability of products and brands that were previously bought in plain brown wrappers or, at any rate, as discretely as possible, from constipation remedies to denture cleaners to incontinence pads.

Talking of which, I do remember being amused by P&G explaining that their collective term for SanPro and Adult Incontinence products was Catamenials. And, better still, my cabin crew friends at British Airways were told to refer to sick bags as Cuspidors.

From Motoring to Mobility

Cars, or should I say Automobiles, were one of the obsessions of my generation. As children, boys and girls alike poured over Observer's Books. We collected Matchbox Toys, Dinky Toys, Corgi Toys. We were given a pedal car as a special present. We helped Mum and Dad wash their cars (by hand) and watched the neighbours polishing up their cars. On Sundays, it wasn't unusual to go out for a drive. Not to get from A to B but simply for the whole family to enjoy motoring.

The automobiles in those days were works of art - beautiful and characterful - and those still running can make us gasp today. And a few years later, in the 80s and early 90s, success was measured by what you managed to land as a company car, as well as the size of your wage packet.

Children these days still play with cars, of course, and brands such as Hot Wheels, which I remember from my childhood, are still with us. But there has been a fundamental shift in the way we think about cars - as a means to an end rather than an end in itself.

In the same way that many younger people these days don't have a landline, more and more young people, particularly those in cities, don't own a car. The car-sharing market, made possible by technology, is booming. Car-sharing, whereby one can set up an account, rather like a phone account, and have almost instant access to vehicles on a pay-by-trip basis has been driven (arf, arf) largely by companies of German-speaking origin. Brands like the Swiss Mobility and car2go - recently arrived in Frankfurt - are leading the way.

As trends go, Car-sharing ticks plenty of boxes. There's the meshing of the real and virtual world, the sharing economy, urbanisation, sustainability and so on. It's also a way for established brands - both car manufacturers and traditional car rental companies - to refresh their image and to be at the forefront of innovation.

Who knows - maybe one of these brands will introduce Classic Car Sharing, combining the dreams of childhood with the technology of today.
Posted by Sue Imgrund at 17:54 2 comments: