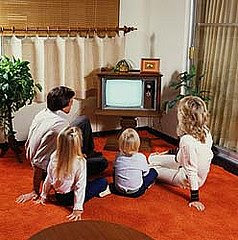 The Times ran a piece by AA Gill recently, laying the blame for the recession at the doors of the advertising agencies. In fact, Mr Gill remarks that he felt it all started going wrong for British advertising when the names of the founders were taken off the doors and replaced with names like "Grandma". Instead of "selling us the idea of capitalism" Mr Gill remarks that "advertising on telly looks dim, frightened and timid".

Now, I do have some sympathy for AA Gill's points. There is a lot of crap advertising on "telly". But I think that people of a certain generation (including myself and Mr Gill) do have a tendency to view the past with rose-tinted glasses. We warble on about the "Golden Age" of British Advertising of the 1970s and early 1980s...but we forget that there was a lot of rubbish around then, too. And I don't mean the stuff that was so bad, it was good, like "Shake 'n Vac" or "Denim". I mean the awful, toe-curlingling cringeworthy ads that most of us have buried deep, deep, deep in our murky collective unconscious. To dredge up just one example, I remember (unfortunately) that one of the first ads I ever worked on was for something called "Top 'n Fill" (if anyone really wants to know, it was a ready-squeezable cake frosting) and involved a character from "On the Buses". I rest my case.

The second, more important point is that the medium itself has changed. We are not all sitting around on Saturday nights for the next installment of some excellent period drama, or future-classic comedy show. No, the TV medium has the odd highlight but you have to trawl through a lot of grotesque reality shows of the Celebrity Sex Change sort to find these pearls. There are also some pearls around in terms of "telly ads". But you are unlikely to catch them at the time they are broadcast - these days, you're far more likely to see them via a link in YouTube.

Which brings me to my final point. There is creativity and innovation in branded communications. But while some of it may be found in the comforting world of "telly ads", most will be found in a totally different medium - online or experiential.

Unfortunately, a telly ad for a dry-cleaner called Bollom (the name used to amuse me for obvious childish reasons) starring Nicolas Parsons has just popped into my memory so I'd better stop now...
Posted by Sue Imgrund at 12:22 No comments: 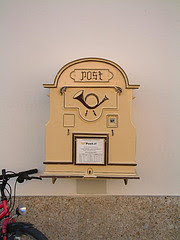 positioning as "part of one of the world's leading logistics companies"
as a result of a recent very German experience.

A couple of weeks ago, I sent a little card to my mother in the UK with the usual postage for something under 20g. I was rather taken aback when the card was returned with a huge sticker from the Post on it (almost the size of the card itself...) demanding an extra €2.70.
Apparantly, the dimensions of the little card were too great for it to be classified as a "Standard Letter", that is, the breadth should fall between 9 and 12.5cm.

Rather bemused, I measured the card and found it to be a proud Imperial 5.5 inches square (particularly fitting, I felt, as the picture is one by Constable). This translates to 13.4 cm. But, looking at the next size of permitted envelopes in the world of Deutsche Post, I noted that these require a minimum length of 14cm, so my card falls 6mm short. In other words, my card doesn't really exist in the wonderful world of the leading global logistics experts.

Anyway, I have written a letter to the powers that be and I will be most interested to hear and see if I get a reply. I would have thought that the Post in whichever country should be encouraging peoploe to write letters, not penalising them for the sake of a few millimetres here and there.
Posted by Sue Imgrund at 08:28 2 comments:

The Palace of Wisdom

I used to spend a lot of time in my younger years reading and scribbling down quotes that pleased me in various dog-eared ex-exercise books. One of my favourite sources was William Blake and, along with that thing about "the road of excess", one of favourite quotations was from "The Marriage of Heaven and Hell":

"Without Contraries is no progression. Attraction and Repulsion, Reason and Energy, Love and Hate, are necessary to Human existence."

Brands that are worth their salt (and worth progressing) seem to know this. The best brands satisfy two (seemingly) conflicting human needs or desires simultaneously. In the days when I worked on P&G, just about every brand I worked on from Oil of Ulay to Ariel was about effectiveness on the one hand and care on the other. And who hasn't ever worked on a food or drink brand that has tried to deliver "health" and "taste" (and has any yet succeeded?).

Most of the "new" brands these days seem to be about the Contraries of Individuality and Belonging. iPod is probably the best example, but amazon, MySpace and Facebook are also in there.

It's a simple principle, but I think that it's much easier to develop interesting communications for a brand with inherent tension than for some uni dimensional onion.

Stranger in the Crowd 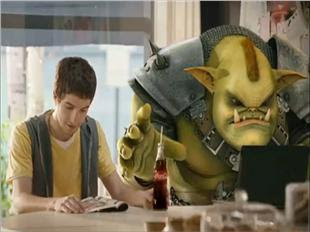 Having harped on about remembering how to be human in my last post, here's a brand that's doing just that. One of Coca-Cola's "Superbowl" ads called Avatar has hit just the right spot - rather like a nice cold bottle of Coke, in fact.

It has a great insight, it's brilliantly made, strategically spot-on and the music stays in your head all day.

Probably the best Coke spot since the New Seekers did their stuff.
Posted by Sue Imgrund at 11:31 No comments:

There is a thought-provoking post on Adliterate on the subject of "Overcoming our Empathy Deficit". Reading through, I think that our collective "forgetting how to be human" is an issue that runs through business and society at large. The symptoms are there to be seen in, for example, the tangled web of call centres, wrong departments, press two for this and press four for that and then give your customer code that we're faced with if we have a simple question for our bank. Twenty years ago you would have just walked in and seen another human being. Or the lack of simple, human common sense that is invariably applied by Jobsworths the world over.

I don't think it's ever been that easy for people in advertising agencies to see the world through someone else's eyes. Advertising has always attracted bright young things with a good dose of arrogance that they are a touch cleverer, rather more creative than "the man in the street." Advertising people generally feel far more comfortable at an awards ceremony, in sitting composing the latest witty and erudite post for their blog, than they do coming in contact with "the consumer".

When I started in advertising in the UK, I think we were a bit closer to people and lives outside the agency. In the tradition started by BMP, Planners regularly did their own qualitative research...and this was in the days when viewing studios were relatively few and far between. Coming to Germany, I was surprised at just how few Planners had any direct contact at all with people using the brands that they otherwise so cleverly positioned, analysed and modelled.

I suspect that the truth is that many people working in advertising and marketing are a little frightened of talking directly with other people who happen to use their brand. While there is usually some or other "box ticked" that the junior client has sat through six focus groups, or the Planner and the Account Exec have spent an afternoon "hanging out with the target audience", it's all still done in the spirit of "observing a different species" and, once it's done, the box is ticked and everyone runs back to the safety of the agency.

In my early days at Saatchi, before the word Insight really came into vogue, we talked about "SURTs" - Simple, Universally Recognisable human Truths. It was a shame, really, that the "H" from human never made it into the acronym, as that was the key to it for me. Maybe if we can just remember how to be human, maybe we have a better chance of really finding those "aha" truths that connect with fellow humans, rather than just shouting at them.
Posted by Sue Imgrund at 13:48 1 comment: