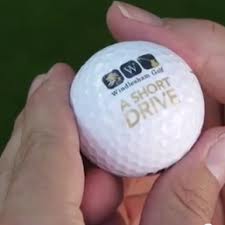 Hyperlocal, grass roots, SoLoMo ....you can choose whichever buzz word you like, but no-one can get away from the fact that mobile technology is opening up a whole load of new possibilities on a local level.

But the campaign that tickled me recently uses good old-fashioned guerrilla tactics - to tap into the local market. Going back to that phrase "grass roots", I'll confess to why I think this idea has grabbed me so much. I grew up in Camberley, which is not a million miles from Windlesham. It's all very stockbroker belt and pink gin and one of my joys as a child was collecting golf balls that had strayed off the fairway.

The challenge for the Windlesham Golf Club was to attract new members who may not live a short drive away by distance, but who do by time. As the club is very close to the M3, this is quite a wide catchment area.

The cunning plan devised by the agency was to "plant" golf balls with the club's web address and logo in drives and gardens of prospective new members, giving the impression that they'd simply flown in from a rather over-energetic swipe.

As anyone who lives in the area knows, stray golf balls in the garden are no uncommon occurrence  - but a golf ball as cleverly logo-ed up as this one is rarer than an albatross.

Best thing of all - you can use the ball for your first round!
Posted by Sue Imgrund at 18:47 No comments: 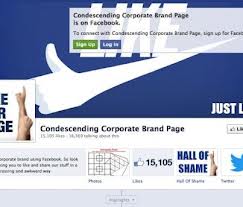 I don't know how many readers of this blog have already smirked over Condescending Corporate Brand Page on Facebook - and, privately, cringed in a "there but for the grace of God go I" sort of way.

I discovered it a few weeks ago via a friend's share, instantly "liked" (note the quotation marks...) and was hugely entertained for the first couple of days by the silly monkeys, cute kittens, retro postcards, motivational quotes (plus dolphins), word games and all the begging to "share" and "like".

The page announces itself as "A big corporate brand using Facebook" and they've already clocked up nearly 25,000 likes.

But...after the first week, I didn't find it so funny, somehow. The umpteenth silly monkey was getting right on my nerves. My newsfeed was blocked by CCBP's never-ending stream of kitsch and drivel. I looked closer at CCBP's description, where they state:

"It WILL get annoying, so "unlike" us if you can't handle it."

I'm almost at that stage now. The only thing I can't decide is - is it all terribly clever and this is their intention. That they'll run up some clever stats about the turnover of those 25,000 and put together a stunning case history.

Or has parody simply become reality?
Posted by Sue Imgrund at 17:18 No comments:


My alter ego, S.P.Moss, has written a children's adventure story, The Bother in Burmeon, and marketing my own product on a limited budget has been a fascinating experience. The last thing I want to do is use this blog to promote my book in a blatant and in-your-face way, but I hope that you'll forgive me the odd little indulgence.

The marketing departments of the large publishing houses have been using book trailers for some time now, and it's a route to draw attention to your book that also makes sense for those who are with  smaller publishers, or are self-published.

There are a lot of book trailers out there and, while some of them are pretty impressive, many are not much more that a cover/pack shot plus back-cover blurb. This really isn't making the best use of the medium.

A book trailer is an advertising spot for the book and, like all advertising spots, it should have an idea. That's one reason I'm so pleased with my trailer, created by an ex-colleague from Saatchis, Roger Mönch. The idea is about "imagination", which ties in nicely with the theme of the story.

And it's not just a great idea, but it's beautifully executed, too. 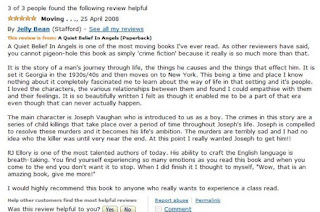 The last week or so has seen a round of articles and commentary about amazon reviews, in the light of crime author R.J.Ellory's admission that he's not only been writing glowing reviews, such as the one above, for his own books, but he's also written damning reviews for books by rival crime writers.

There's been a huge outcry - is this the tip of the iceberg? Is it possible that many of the reviews, ratings and likes on the internet are fake?

I'm surprised that anyone even has to ask. It's been possible for some time to buy Twitter followers, Facebook Likes and reviews of all sorts over the internet at quite reasonable prices (anything from 2 - 55 US Dollars for 1,000 Twitter followers.)

Facebook has announced that they'll be trying to crack down on false Likes. This is all very well, and those that are bulk-bought or generated by malware should be fairly easy to sift out.

But what about those "likes" and "reviews" that aren't so obviously fake? R.J. Ellory must have spent a few minutes of his valuable writing time composing the above review. Fake it may be, in some senses, but it couldn't have been written by a robot.

Perhaps those of us who are marketing - whether it's brands or books - should think more deeply about what these metrics really mean. Are we too quick to fall into the trap of pantrometry - it can be measured, so it must mean something? Or are we living by the McKinsey maxim of "what you can measure, you can manage?"

We can measure likes, followers, review stars and all the rest - but does it lead to the truth? Probably not.
Posted by Sue Imgrund at 09:48 No comments:

Who remembers the corporate advertising of twenty plus years ago? In the 1980s, corporate advertising on TV became de rigeur on the back of the many share offers arising from privatisation and deregulation. The classics of the genre were masterpieces in pomposity, with swirling clouds, rolling countryside backgrounds, classical soundtracks and sonorous voiceovers intoning "There is a company that..."

Working on the British Airways account at the time, our challenge was always to portray scale and humanity in one - our holy grail was "the cuddly colossus."

Times have changed, media have changed, film techniques have changed and people's relationships with corporate brands are very different. And this is reflected in the sort of brand films being made which could technically be termed corporate. Away with the pomposity, in with the human story - preferably that of the founder. The swirling clouds and rolling countryside scenes have been replaced with cute animation techniques.

Two examples come to mind - "The Lego Story" by Lani Pixels, a 17 minute film that has well over 2m views on YouTube, and the Adidas Adi Dassler animated film from a few years ago.

Maybe you can argue that the cuddly, naive animation approach is more fitting to a child or youth orientated brand, but I wouldn't be surprised to see some of the former colossi scaling down to Wallace & Gromit size.
Posted by Sue Imgrund at 12:05 2 comments: