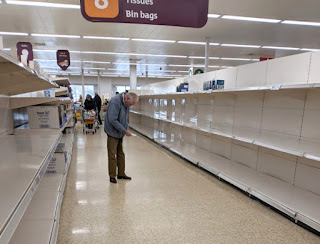 About a week ago (I have lost track of time in this weird pandemic pandemonium), in the light of supermarket shortages, the photo above went viral on social media. Comments focus on how "heartbreaking" it was, with plenty of weeping emojis and self-righteous indignation about the lack of brain cells of the loo-roll hoarders and their like.

I can imagine that most of these comments saw a tragic scene of a "poor elderly (anonymous) gentleman", sadly bowing his head in silent submission of his fate. The reality, I read later, was a little different. Anthony Glynn, a retired merchant seaman aged 79, had gone out shopping on behalf of his elderly neighbours and had forgotten his reading glasses so was squinting at his shopping list.

This reminds me of my parents, who, in their retirement helped out with "the old people" - in fact, in her 90s, my mum was still doing voluntary work for Age Concern, visiting older people who were housebound. Some of these were a good few years younger than her, of course.

In real life and in marketing (which shouldn't actually be different, but they are), there is an increasing tendency to cast everyone as a victim, to describe huge swathes of the population as generally "vulnerable" - without really saying to what in particular. And yes, human beings are vulnerable - to the COVID-19 virus for example.

But you can be resilient, courageous, even, as well as vulnerable. Society is not simply divided into "heroes and the vulnerable" or (in pre-corona days) into "the toxic and the victims". I found this article by sociologist Frank Furedi particularly illuminating on the current crisis. He calls for a cultivation of courage, and its attendant qualities of altruism, responsibility and wisdom.

Courage is not the same as fearlessness. You can't have courage without fear.

I do hope that one (admittedly not terribly high on the world priority list) consequence of the current crisis is that we'll see all those ridiculous "empowerment" campaigns for the nonsense and home-grown problem:solution guff that they are. 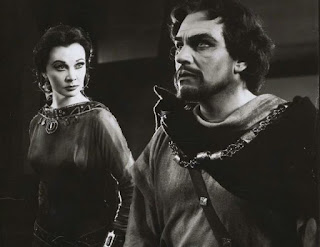 I've got a little prediction. Brand managers will notice that the poster girls of 'Purpose' - female empowerment, body positivity and gender stereotyping - are getting a little long-in-the-tooth and been there/done that, and will start casting around for replacements. Maybe something that's a little less MeMeMe?

A few strands of thought will coalesce. Reports about the divisions and fault lines in society. The movements against online bullying and trolling - #BeKind - and the debate surrounding this. The trend to "uplit" in the publishing world. The call for more empathy, even though people that work in advertising and marketing aren't as good at that one as they think. And, of course, brands that have already taken the first step.

Coca Cola has recently announced its refreshed purpose as "unite and uplift". To me this sounds rather like the opposite of the old Playtex Cross Your Heart line which was about lifting and separating. Brushing that aside, though, as Graham Booth states in the blog post, Coca Cola kind of has uniting in its DNA, although there's been some dilly-dallying around with other ideas in the last few years.

The launch commercial, "Could I be wrong?" has been out for a couple of weeks. We've yet to see if it joins the realms of classic Coca Cola ads such as "Hilltop".


And another variant on the "be nice to each other" theme is Cadbury's, whose brand moved (in 2018) from catalysing moments of joy (which are a little MeMeMe) to moments of kindness to others, specifically generosity, with the idea that "there's a glass and half in everyone."

I'm not sure what the best translation is for "kind" in German - there's "freundlich", which also has connotations of friendliness and approachability. Or "nett" which is simply "nice" with the same sort of connotations. And the words "gütig/gutmütig" which are to do with Goodness.

And this is the thing with kindness. I do think it's a valid area for a brand purpose, but it really isn't a one-size-fits-all thing. I'd hate to see the advertising world awash with "th' milk of human kindness" in the way it's been over-run with increasingly cliched babble about female empowerment.

You can ask children to play nicely if you're a nanny or or primary school teacher. But you can't tell adults to be kind. Kindness comes from within, from your values, and isn't just about some stunt involving random acts, or forcing people with extreme opposing views to drink a beer together.

What unique role does your brand play in kindness? Is it about bringing people together, sharing, helping, caring, understanding ...?

I do hope that the idea of kindness will be a rich seam for marketers.

Yet, advertising industry, do I fear thy nature when it comes to band wagons.
Posted by Sue Imgrund at 11:46 No comments: 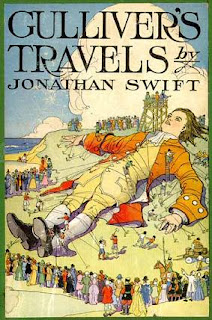 The notion of the customer relationship seems to be going out of fashion a little, perhaps muted by the increasing volume of "consumers don't want to have a relationship with your brand"-type clickbait headlines in marketing articles. Or maybe due to the obsessional focus on "the customer experience". But long-term experience, relationship, call it what you will is what this post is about.

Amazon is one of those brands that made a huge difference to my life. I often wonder whether it's the brand itself or the generic service of an online bookstore, but if so, Amazon was certainly the right brand in the right place for me in the late 1990s. No longer did I have to trek into Frankfurt to buy books in English. And in the early 2000s, as my son was young, Amazon was a godsend, both for the latest children's books and for tracking down old favourites from my childhood to read to him.

I started reviewing relatively late into my Amazon relationship - I've tracked down my first review, which was in May 2006. In the following 14 years, I've contributed over 300 reviews, mostly books, with the occasional CD or DVD thrown in. My reviews were always intended more for my own reference, but I was flattered when others commented on them or found them helpful. I had a brief season of fame as a Top 1000 reviewer, and was amassing 30, 40, 50, 60 helpful votes on each review on a regular basis. I felt valued, not just in terms of my custom, but also for my contribution and opinions.

It all started to go sour about six or seven years ago. Ratings, and putting a work of literature on the same level as a piece of cable or a packet of paper napkins, fake reviews, world domination, dubious business practices ... Amazon seemed far removed from the benevolent bookseller of the early days.

I carried on posting reviews, but with less enthusiasm. My Top 1000 crown had slipped, maybe because I wasn't reviewing the popular books, and maybe because I was only reviewing books, and not pieces of cable or packets of paper napkins. I started hearing reports about reviews being deleted if Amazon's algorithms detected a relationship (ha!) between the reviewer and the author.

Since October 2019, Amazon have made it official: ratings are what counts, reviews are by-the-by. And the star rating a book, or any other product, displays is not the simple average of all the ratings. Oh, no. That would be much too clear. Here's their explanation:

Amazon calculates a product’s star ratings based on a machine learned model instead of a raw data average. The model takes into account factors including the age of a rating, whether the ratings are from verified purchasers, and factors that establish reviewer trustworthiness.

Given that Amazon's ethos is about shiny new things, I seriously doubt that ratings are like wine: the age factor is, in all likelihood, a negative one. So the rating accompanying my well-thought out review in 2008 will be factored down compared to a bot giving a one-tap rating yesterday.

And most recently, I haven't even been able to post reviews on Amazon.co.uk at all, where they'd be most relevant, as I review English-language books. I can still post on Amazon.de as I spend more than I'd like to on books for my Kindle - but who is going to read my reviews there? Here's another example of Amazon making me feel like a valued customer, in their explanation as to why "this account has not met the minimum eligibility requirements to write a review":


To contribute to Community Features (for example, Customer Reviews, Customer Answers), you must have spent at least £40 on Amazon.co.uk using a valid payment card in the past 12 months. Promotional discounts don't qualify towards the £40 minimum. You do not need to meet this requirement to post Customer Questions, create or modify Profile pages, Lists, or Registries, or to read content posted by other customers.

It's not one of the world's (or even my) most pressing problems, but it does make me nostalgic for what seemed in retrospect, like a Brave New World in the mid 2000s, where anything was possible.

I'm stuck with Amazon, mainly through my Kindle. I could give up on the reviews, and go back to just doing them for myself, or on a blog, or on GoodReads. I could try and extricate myself, buy a new e-reader and start again. But it's all too much of a faff. Amazon have got me where they want me - just another customer, bound-up and too apathetic to make a fuss.

And that's what they mean by customer-centricity.
Posted by Sue Imgrund at 10:34 No comments: