The dinosaur had a baby - and they called it O.W.N. 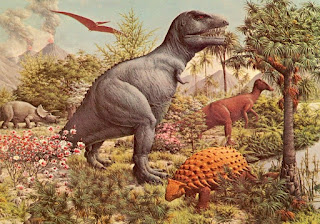 A couple of years ago, I addressed the question of old dogs and new tricks, and a little while later wrote about Beiersdorf's first new product launch in 30 years, Skin Stories.

I'm back to Beiersdorf again today, with the launch this week of O.W.N. - a personalised skincare brand for cleansing, day and night care.

Now, to look at O.W.N. you'd be forgiven for thinking it's yet another of those hip, start-uppy new brands that flood Instagram.

All the boxes and more are ticked:

On self-care mega-trend and need for individualisation

Personalised at scale, with 380,000 formula combinations on offer

All driven by A.I. and algorithms, which get to know your skin better day by day

Brand identity fits current aesthetic, including brand name (which stands for "Only What's Needed"), and of course your own name on the packaging

But what's different here is the role of the dinosaur mother company. Only with 140 years' knowledge on skincare and the backing, in development, of a study of 10,000 women in Europe and Asia, with 2.5m "skin measurements", are you going to get the trust and buy-in at scale that O.W.N. is really going to do what it says on the recyclable tin.

And it's all part of the grand (yet flexible) strategic plan and purpose of the matriarch.

Now, notice I said "mother company", not "mother brand". Did Beiersdorf consider bringing out the new brand under the Nivea name, or at least make some allusion to it? I'm sure that was hotly debated.

Maybe there's something to be learned here for the companies where brand and corporate name are one and the same.

Whatever, this is a clear sign that some of those legacy dinosaurs aren't going to die out just yet. 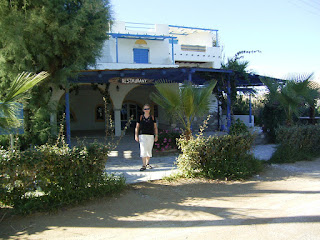 The author in Paros, October 2005
Nine months ago, I was maybe foolishly optimistic about the return of travel and the re-emergence of a revived travel industry. With all the talk of building back better and big resets, the industry that is still suffering from the pandemic fallout is travel. The hoped-for recovery just isn't happening, whether it's airlines, hotels or tour operators. Not surprising, as we have just had lockdown extended for the umpteenth time.
There's an article here from Springwise that tries to take a positive tone, about clever innovations within the travel industry to adapt to people's changed behaviour and need expectations as a result of the pandemic.
But can I be the only one that finds this dreary, and rather missing the point?
Whether it's art exhibitions or travelling exotic lands, there is a limit to how much virtuality you can take. Like those virtual shoes and outfits that some people apparently pay astonishing sums of real money for, the novelty wears off at some point.
Virtual reality Japanese Onsen bathhouse experience? I'd prefer to wait for the real thing. One day.
Guest rooms in bubbles? Haven't we had enough of bubbles, from the filter sort to the friends and family sort?
Robots doing all the stuff that, in years gone by, came with a twinkling smile, a drink on the house that stretched into six, and stories about the days and nights they shot that famous Hollywood film in the bay round the coast ...
Contactless hotels, facial recognition technology ... yes, good. But the photos are cold and perfect and devoid of any human touch. Contactless, indeed.
All this stuff may be about "needs" and "changed behaviours", but what about desire?
I've got a yearning for dirt. Greasy spoon cafes and restaurants without a menu at all (and I don't mean it's all online). Heat and dust, colourful chaos, mess, adventure, surprises - the bad ones, too, that you can laugh about afterwards. Places so windy wearing a mask is laughable. Laughing about everything and anything.
A pre-pandemic, pre-Instagram, unsanitised world.
Posted by Sue Imgrund at 13:06 No comments: 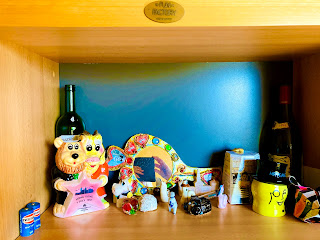 A New Year, a new series on Extrawurst. Going back to my roots aka Wurzeln, if you like.

When I started freelancing, back in 2003, I decided to write an article each month on a market, brand or aspect of life in Germany. This was originally for my friends The Value Engineers.  Later, the collected articles found their way onto my (currently undergoing digital transformation) website. And in 2008, I started this here blog, and the articles grew sad and dusty on a long-forgotten external hard drive.

I reckon 15 years is long enough in the past to be retro, so, with a fanfare of red plastic trumpets, here comes Retrowurst. There'll be one of these a month, and I hope they will interest, intrigue and maybe give a nostalgic taste of the early days of this millennium, the days when I was still a relative stranger here.

This month, I am going to consider a few developments in the German drinks market that would have Wilhelm IV, Herzog of Bayern, turning in his grave (and which would have probably turned his stomach too, had he still been alive)!

Wilhelm IV of Bayern was responsible for passing the world’s oldest law concerning foodstuffs, otherwise known as the Reinheitsgebot or Purity Law. It is not known whether the duke of Bavaria passed the law as a result of a terrible hangover or stomach upset, but he decreed, on 23rd April 1516, that beer produced and sold in the towns, markets and countryside of Bavaria should contain no ingredients other than barley, hops and water. For hundreds of years brewers in Bavaria and later in the rest of Germany obediently followed the Reinheitsgebot and Germans enjoyed the benefit of what is arguably the best beer in the world. The German beer market has not been so influenced by the fads and fashions seen in the UK, for example. Of course, the odd imported beer can be seen now and again in the more fashionable bars and clubs but, by and large, most Germans are happy with a glass of Pilsner or one of the more localised beer variants. Whether it’s a bottle at home in front of the TV for Sportsschau (no self-respecting German would dream of drinking a can of beer) or a half-litre sitting in the Biergarten in the shade of chestnut trees in summer, it tastes good every time and generally has no undesirable or anti-social after-effects.

However, one thing that Wilhelm IV did not forbid in his Reinheitsgebot was the mixing of beer with other drinks. And it is in this area that the worrying developments are now taking place. There is a fairly long tradition of beer-based mixed drinks in Germany. What we would term shandy – beer mixed with lemonade – is known here as Radler. Radlerliterally means ‘cyclist’ and this drink was traditionally offered as a thirst-quencher to cyclists in the summer as an alternative to drinking large quantities of potent beer. Jerome K. Jerome’s book, “Three men on the Bummel”, a sequel to “Three men in a boat” paints an evocative picture of a cycling tour through the Black Forest in the early years of the 20th Century where Radler is, naturally, consumed.

Another more recent beer-mix drink is Colabier, which is particularly popular amongst young people. Colabier is also known as Dreckigesbier or ‘dirty beer’ on account of its somewhat off-putting appearance. Despite being an odd concept and looking pretty revolting, Colabier is actually quite palatable in the right context. It is a good party drink, as the caffeine kick counterbalances the soporific effect of the beer.

As they stand, Radler and Colabier seem harmless and non-threatening enough to the mighty German beer industry, with their connotations of idyllic Edwardian summers and youth club barbeques. But the beer industry here is not as healthy as it was. Although the Germans are still high up there in the beer consumption league (second only to the Czechs), beer consumption per head is down. In 1995 consumption was 136l per head per year; by 1999, this was 127l per head. Although this is still equivalent to 0.33l per person per day, the trend is at best static and at worse, in decline.

Increasing concerns with fitness and health have resulted in less alcohol consumption generally and young people are beginning to look to other drinks.

Alcopops and ready-mixed drinks hit Germany a little later than the UK but have become very popular in the last couple of years. The focus is more on the ready-mixed drinks, such as Smirnoff Ice or Bacardi Breezer, or bottled versions of cocktails such as Mojitos rather than alcopops. The breweries have responded by producing commercial, ready-mixed versions of beer-mix drinks with a difference. While ready-mixed Radler has always been available, this was normally promoted at a very low level with nostalgic graphics and imagery, which could have come straight out of Jerome K. Jerome.

The new beer-mix drinks are aggressively promoted and clearly targeted at the young club and party crowd with funky or hi-tech names, graphics and ingredients. Most of the major breweries are getting in on the act, with an ‘if you can’t beat them then join them’ mentality. Licher, a medium-sized regional brewery from Hesse, which promotes its main beer brand on a very ‘nature-influenced’ platform, has introduced ‘Radler Limone’, ‘Cola 2’ and ‘Fresh Lemon’, with modern graphics and pack design. Diebels’ Cola Mix is called ‘Dimix’ with hi-tech graphics, while Köstritzer has a sub-brand called ‘bibop’ described as ‘dark beer with cola and guarana’. One of the biggest breweries, Krombacher, has a sub-brand called ‘Cab’ which is ‘Cola and beer flavoured with dragonfruit’. The pack design has a far-eastern touch, with no reference anywhere to the Krombacher or German heritage.

It will be interesting in the long run to see what effect these developments will have on the German beer industry. Will these commercially produced and over-marketed mixes pollute the good name of German beer? Or will they introduce young people to the world of good quality beer? Without being too pessimistic, these sub-brands have a distinctly ‘mutton dressed as lamb’ or ‘embarrassing Dad at school disco’ feel about them and one can’t help wondering if there are more appropriate and effective ways for the German brewing industry to revive its flagging fortunes, maybe by going back to its roots – all the all way to 1516 and Wilhelm IV, in fact.

Well, as always happens, the answer isn't either/or - it's both. And neither. Beer consumption has continued to decline in Germany (from 115.3l per head in 2005 down to 99.7l per head in 2019), while Germany now appears to have slipped down to the 4th in the world in terms of consumption - yes, the Czechs are still up at the top, but both the Namibians and Austrians have slunk in between, according to one data source.

The wild and wonderful flavours have continued to proliferate, including some unholy mixtures involving energy drinks. But - the trends to local and regional, sustainability and craft beer have meant that even though Germans are drinking a little less, there's more choice on offer than ever.