You're the one that I want

One facet of modern life that we face several times a day as a result of the digital revolution is too much choice. Quite often, we don't even have to make a choice - compare your iPod on shuffle with a Sony Walkman for example, or think of amazon choosing the next book for you to download onto your Kindle. But when we do have to make a choice, it's sometimes difficult to focus. We've all heard about those behavioural economics experiments with flavours of jam - it's easier to choose from six than it is from twenty.

There are a number of ads and apps that have made something of the insight that perhaps, these days, people would like to be more selective. Be forced to be more selective, even. There's the spot for the VW Golf VII which broke this autumn. Although, if I'd been in charge of the music choice and it had to be of that 80s-early-90s era so loved by ad people, I'd have gone for U2 rather than the Style Council. But then I'm a planner and like to have my strategy showing.

And there are a couple of other examples on this theme. The One Momento photo app allows you to share one photo only, so you must be careful how you choose. And This is my Jam, a music-sharing service limits its users to sharing one track a week, so it has to be the one you really, really want.

Who knows, at this rate, maybe single-minded propositions might kick out all those stories, journeys and manifestos and make a comeback!
Posted by Sue Imgrund at 13:11 No comments:

Fraudsters are human, too 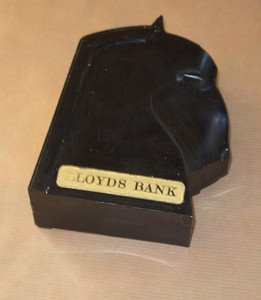 I've mentioned the Black Horse money box before - one of my most enduring memories of the Lloyds (TSB) Bank brand. But yesterday, my loyalty of over 40 years was put to the test.

I needed to pay in a cheque made out to me in my maiden name. The cheque was written by someone who I don't know and who it would be a hassle to trace, especially given that the huge sum involved was £7.49. My first encounter with the call centre went as follows:

Steve (not changing his name cos he's not innocent and doesn't need protecting): No, we don't accept cheques unless they are made out to the account holder. You'll have to ask the person who wrote it to change it.

Me: But...I live in another country...and I don't know her...and it's only a small sum of money...look, it's the name my parents set the account up for me in, 40 years ago...I can send you a copy of my marriage certificate...

Steve: We only accept cheques that are made out to the account holder.

Steve: We have to do it to stop fraud. We only accept cheques that are made out to the account holder.

Steve: Thank you (puts phone down on me)

To cut a long story short, the next Lloyds TSB employee I spoke to was a human being. She sussed out immediately that a fraudster was unlikely to concoct such a story for a possible gain of £7.49. She did the human, sensible thing and contacted my branch. Yes, of course you can send the cheque there, with the marriage certificate and a little note to say we've spoken...is there anything else I can do for you...

When will service brands learn that they'll catch more fraudsters if they start acting and thinking like human beings. It would help their reputations, too.
Posted by Sue Imgrund at 12:50 No comments:

The death of objects? 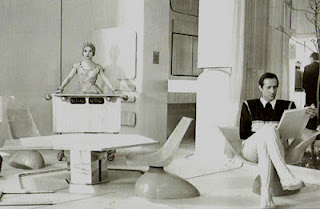 Read any trend publication these days and somewhere along the way, you'll find a reference to how the  digitalisation of the world we live in, combined with a human desire for simplicity and clarity, will lead to a reduction in the number of things and objects in the home and office. In the past, we had an alarm clock, a telephone, a radio, a TV, a music player, a barometer, a grandfather clock, the household gods...OK, maybe not...but now everything is contained within one device.

There's no denying that digitalisation is one of the main forces governing the way we live, but even pre-digitalisation, predictions of the future focussed on a reduction in stuff and clutter, with visions of blinding simplicity and clear, clean lines.

But life's not like that. Have you ever seen the paperless office we'd all be working in by the turn of the century? Have you had your living room invaded by an army of yellow and red plastic, which takes up twenty times the space of its two-year-old general?

Let's think about the generations alive today. There's the generation of the post-war years, who hoarded everything from yoghurt pots to chianti bottles in case these things came in useful, or you could make a lamp out of them. A generation that kept everything because there were no copies or back-ups.

Then the generation who accumulated stuff because they could, and they could afford to: gadgets, status symbols, collections. And who now have parallel technologies - the latest iPhone and the retro-style record player for that collection of 200 LPs.

And now the generation who have the sustainability gene - with behaviour driven by reuse, recycle, reduce. A generation who decorate their electronic devices with a multitude of dangly crocheted bits 'n bobs - not dissimilar to household gods, in fact.

Overlaid throughout this is the human tendency to cosiness, to clutter, to comfort , to trash and frivolity. From paintings of teary orphans to singing gorillas to combat outfits for dogs. Yes, a lot of this has now moved online but that's also a parallel rather than replacement development.

Trust me, I'm a brand


Tomorrow, John Lewis will launch its Christmas ad for 2012 via social media, just a few days after winning the Grand Prix in the IPA Effectiveness Awards for the "re-energising" campaign of the last couple of years.

Amid all the speculation, it's interesting to have a look at the case history and the thinking that's contributed to the success of the campaign so far. Commentators are making much of how John Lewis has tapped into a cultural trend - the need for constancy in a changeable world. There's a lot of talk about how people are "re-evaluating life choices" to focus on what's really important. I can interpret that as follows: it's not enough to know what makes human beings tick - it's vital to know what makes them tick right now, in the current context.

Of course that's some of it. But there are plenty of ads that communicate constancy and "as good as we've always been" and "always there" without having the emotional pull and commercial success of John Lewis.

I think the key is in a phrase used in the paper: John Lewis is described as a "beacon of stability." Now, think about that - it's a paradox. What could be less stable than something that's burning, flickering, in continual change? It's a bit like the "cuddly colossus" that we sought for British Airways. Again, from this apparent paradox, the brand derives its energy. Yes, it's always there, but at the same time it's always inspiring, enlightening, dynamic. It's a million miles from a security blanket.

As an aside, it always amuses me to see what short memories people in advertising have. Yes, the John Lewis "Always a woman" is a great ad - and part of a great campaign. But I wouldn't describe it as ground-breaking: surely it comes from the same school technically and emotionally as the 2008 Hovis ad, if not the same agency?

Right - I'm off to re-evaulate some life choices if that's what we're all meant to be up to these days!

I'm not much of a beer drinker these days, although on holiday, I do succumb, particularly if the weather demands it. After all, who doesn't do stuff on holiday that they wouldn't dream of doing at home? And, when in Greece...I order a Mythos beer.

Mythos is one of those relatively recent inventions that does a good job of seeming authentic, particularly when sipped from an iced glass in a slightly peeling taverna facing out to sea, while tucking into freshly grilled fish.

But although my recollections of alcohol from my wild 80s days in Greece include an impressive list of cocktails and beer brands such as Amstel and Heineken, Mythos does not feature. A little bit of brand archaeology revealed to me that my friend Mythos is something of a sheep in wolf's clothing, to misquote yet another Greek.

The brand is only fifteen years old and the company that created it grew out of none other than Henninger Hellas S.A, which has a particular meaning (and not always a good one) to those of us in the Frankfurt area. And the company is now a subsidiary of Carlsberg.

Maybe that's the reason that I wouldn't dream of ordering the stuff outside Greece - even in my local Greek restaurant.  Because a brand like Mythos needs its context for its authenticity to work: plucked out of the sunshine, away from the smell of souvlaki and the bougainvillea, it's just another nondescript lager.

But after you've climbed the endless steps to some dusty acropolis in the midday sun, nothing else will do!
Posted by Sue Imgrund at 17:55 No comments: