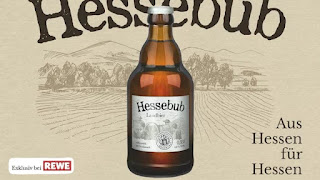 September is a time when I’m intensely aware of the local region I’ve landed up in here in Germany. Maybe it’s because we’re a bit out in the country, surrounded by orchards and Apfelwein presses, where mountains of local apples are delivered every morning, growers paid by the kg for their wares. There’s a Kurbisfest one Sunday in our town, with pumpkins of all shapes and sizes lined up ancient steps and round the well in the town square.

Germany has always been more intent on regional and seasonal produce than the UK. It could be that showing regional pride and loyalty is slightly more palatable for many Germans than nationalistic flag-waving. Or perhaps it’s simply because Germany is a far bigger, federal land, less centred than the UK on its capital.

The main supermarkets here have generally got their act together about regional produce. Given that the roots of these supermarkets were in local co-operatives, maybe it's no surprise. Incidentally, the word Kolonialwaren had always puzzled me - you can still see the word on old shop signs - it was used to describe imported goods such as coffee, tea and sugar as well as spices.

Of the two biggest supermarkets, I’m more familiar with the No. 2, REWE, founded in 1927 and based in Köln. (No. 1 is Edeka - where the “k” comes from Kolonial - which was founded in 1907 and is now based in Hamburg.) REWE offers a wide regional selection of products, labelled up as so:

These products are mainly fruit and vegetables, eggs, dairy and meat products, but also honey, flour and wine. Local brands of, for example, jam or pickles may also be offered under the regional banner.

But this summer, I noticed a new development for REWE - a beer named Hessebub, which is roughly translated as “Hessen Lad”. The packaging looks very much as this could be a small local brewer who has been crafting beer for centuries that REWE have picked out of obscurity and given a helping hand.

But the reality is different: this is an Own Label masquerading as a brand. It’s an interesting one, a kind of manufactured authenticity. The beer is brewed in Darmstadt, so the product is as authentic as could be. But the name and label design were brewed up in a 21st century office.

A genuine local brand, or the equivalent of a flashy advertising executive pulling on hired Lederhosen once a year for the Oktoberfest? 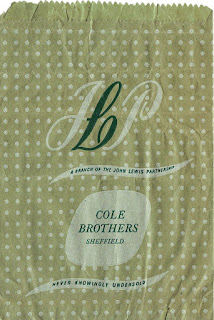 There’s one High Street slogan that’s been around since before the late Queen was born, but like Her Majesty, has recently become history.  Never Knowingly Undersold was not originally intended as a customer-facing slogan, but became so in 1925, when it was first used by the Peter Jones store in Sloane Square.

Although this slogan is not exactly slick (it’s a bit of a mouthful), it is unusual not just because of its longevity, but also because it’s a firm promise to the customer, rather than an imperative of how the customer should live their life, in the style of something like Just Do It, or a statement of attitude or belief as in Life is for Sharing.

The point about a customer promise is that, even if few customers go to the bother of asking John Lewis to refund the difference on an item bought more cheaply elsewhere, it builds trust in the brand and demonstrates serious commitment to its users.

Of course, shopping has changed beyond recognition since 1995, let alone 1925, and in these days of online retail giants and price comparison platforms, the slogan itself could not sensibly survive. John Lewis have undertaken an 18 month brand positioning process to find a replacement - something that will attract new and younger customers to the retailer.

With my nerdy branding hat on, I must say that it was fascinating for me to see the fruits of this year-and-a-half of branding labour. Some of the positioning statements/slogans (the source articles don’t make it completely clear whether these are strategic/internal or executional/customer-facing) that were considered were these:

And the final slogan is John Lewis: For all life’s moments.
I can’t be the only planner who has also played the “moments”, “life”, “happiness”, “joy” permutations and combinations game at some time in the quest for the ultimate positioning statement. I remember back in the 90s, there was a brand (it could have been chocolates) that advertised with the song Magic Moments, which would be hummed whenever an unsuspecting planner or account person strayed too close to generic “moment” territory.
But moments seem to be having a moment in marketing, if you’ll excuse the trite expression. I keep hearing conversations about targetting moments and have seen some rather contrived but frightening “moments universes” from research agencies to help in this task.
My concern is that the new slogan is terribly generic. IKEA could use it, but they don’t in the UK as they have something infinitely better - a slogan and campaign idea that’s a statement of attitude and a promise in one - The Wonderful Everyday.
There’s nothing wrong with the new slogan, but there’s not a lot right with it either. It’s not a promise, it’s not a challenge, it’s not an attitude or philosophy. It has no edge, rather like “We’re there for you.”
The new ad to introduce the slogan is similar - sweet enough, hummable music, but ultimately rather beige and wallpapery.
Some new slogans grow on you over time, but I fear this one will simply go in one ear and out the other.
Posted by Sue Imgrund at 17:37 No comments: 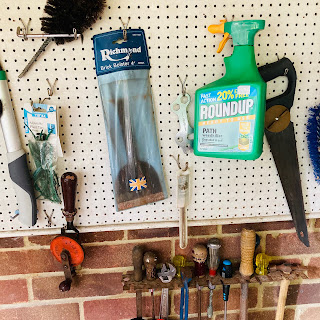 In September 2004, I wrote on the rather unpromising-sounding topic of chemicals in home and garden. Nevertheless, the article references schoolboy bombs, drinking your own urine and packs of fags for under £2. So here goes:

In September, everyone in Germany is back from their holidays, feeling a little glum as the first leaves start falling in the beer gardens and the mini-golf courses close up for the Autumn. People retreat back into their homes, start packing away the summer clothes, inflatable boats, garden furniture and barbeques. It’s the time of year to make a bit of an effort in the garden and a recent visit to the garden centre has inspired the theme of this month’s Extrawurst - the German war against chemicals.

It may seem a paradox that the country that spawned so many chemical and drug giants - Hoechst and Bayer to name but two - should be waging war on chemicals, but please hear me out. To illustrate my point, let’s pop back to the garden centre. I was after something to kill off a few weeds- in the lawn and growing up between the patio stones. I didn’t anticipate any difficulty and had the German word for weeds - Unkraut, literally ‘un-herbs’ – in my head. In the UK, of course, it’s completely in order to pick up products off the shelf to rid your lawn and garden of dandelions, thistles, slugs and even unwanted cats. Only the neat Sodium Nitrate (or whatever it is) that my brother used to combine sugar with to make schoolboy bombs back in the 1970s is probably under slightly stricter control these days. In Germany, however, I searched high and low and couldn’t find any easily accessible products on the shelves of the garden centre. I eventually saw a locked cabinet behind an information desk and enquired hesitatingly if they had anything to rid my lawn of a few dandelions. I was subjected to a complete interrogation as to the dimensions of my lawn (who, other than the average German, knows exactly how many m² their lawn is??!!) and given a lecture as to how the products were not to be let near any footpath, pavement, road or any other public place (accompanied by pointing at large handwritten signs to this effect) before the cabinet was unlocked and my weed killer handed over.

Maybe some of this attitude can be put down to the inherent closeness and responsibility that Germans feel for the Umwelt, or environment. There are many words that exist in German which relate to the environment which don’t have a direct English translation- such as Mülltrennung, or ‘rubbish-sorting’. But the war against chemicals is also fought on fronts with a less direct connection with the environment. Some of you may remember my piece about the Kräuterhexwhich looked into the reluctance that Germans have about treating ailments with something that might actually work. While it’s quite easy to sneak into Superdrug in a UK high street and buy copious quantities of Anadin and Alka-Seltzer (or your preferred poison) to deal with the hangover from Hell, in Germany it is rather different. None of these remedies are available in the Supermarket or even the Drogerie. You are expected to go to the pharmacist where you will be questioned carefully as to the nature of your headache and will be asked which dosage level, pack size and even possibly dosage form (don’t think about this too closely - let’s just say suppository or Zäfpchen and be done with it. Yes. For a headache.) The moral of all this is, go easy at the Oktoberfest.

Within the household cleaners category, the same rules seem to apply. Finding an oven cleaner that is at all effective is hard work, almost as hard as cleaning the oven itself. Ditto stuff to unblock drains - everything proudly promotes its Bio mode of action, which seems to actually mean elbow grease and sheer man (or woman) power. Needless to say, the lurid Oxy-this and Vanish-that types of products with their day-glo packaging haven’t really caught on here. At my last ‘real’ job I remember hours spent trying to convince brand managers at a well-known US detergent company that ‘anti-bac’ variants of washing powder were the ultimate turn-off to German Mums - this is the country, after all, where quite normal women’s magazines run articles about the health benefits of drinking your own urine (although marginally preferable to drinking someone else’s, I suppose.)

The reluctance to spray chemicals everywhere also has its consequences when buying fresh produce. It is not unusual to buy a lettuce and find it crawling with caterpillars or buzzing with bugs, and this is not just from the Bio, or organic section - I imagine one would find a whole menagerie lurking in the Lollo Rosso there! Rather than throwing up their arms in horror and demanding a refund, most Germans would find this reassuring that their salad leaves had been properly raised in a natural ecosystem.

Of course, it is easy to be lulled into a false sense of security and suppose that, as long as we stay away from chemicals and unnatural substances, then we are giving the Germans what they desire. But there are always exceptions to the rule. While paranoid about polluting the environment, many Germans have no such qualms about their own bodies when it comes to smoking. Smoking still bears almost no social stigma here, cigarette vending machines are on every street corner at a height that a four-year-old can reach and even Aldi Süd have capitulated and are now selling cigarettes. At €2.90 for a packet of 19 ‘Giants’ (that is just under £2), there is not much financial motivation for anyone to give up!

Covid has made a little dent into the “germ/ans are good” perception, but other than that, the view on chemicals is just as strong as before.

Plus ca change? Well, not exactly. Remember those £2 ciggies? In your (pipe) dreams. At last, it appears, the tide is turning and we may well be at the fag-end of the great German smoke-fest (to mix more metaphors than is good for me).