Making best use of your space

In these days of oh-so-clever apps and nifty new film techniques, it's cheering to see lo-tech used in a way that is just right for the message and the brand.

IKEA is known the world over for its smart, simple ideas and the so-called RGB billboard that is showcased above is brimming with smartness and simplicity - and probably didn't cost the earth, either.

The message that you see depends on which colour bulb is illuminating the billboard at the time.

Do it like this billboard.
Make good use of your space.
With small-space solutions from IKEA.

A better demonstration of making good use of space would be hard to come by - or one that leaves you smiling like this does. And, although the billboard is to be found in Sweden, the idea came from German agency Thjnk. 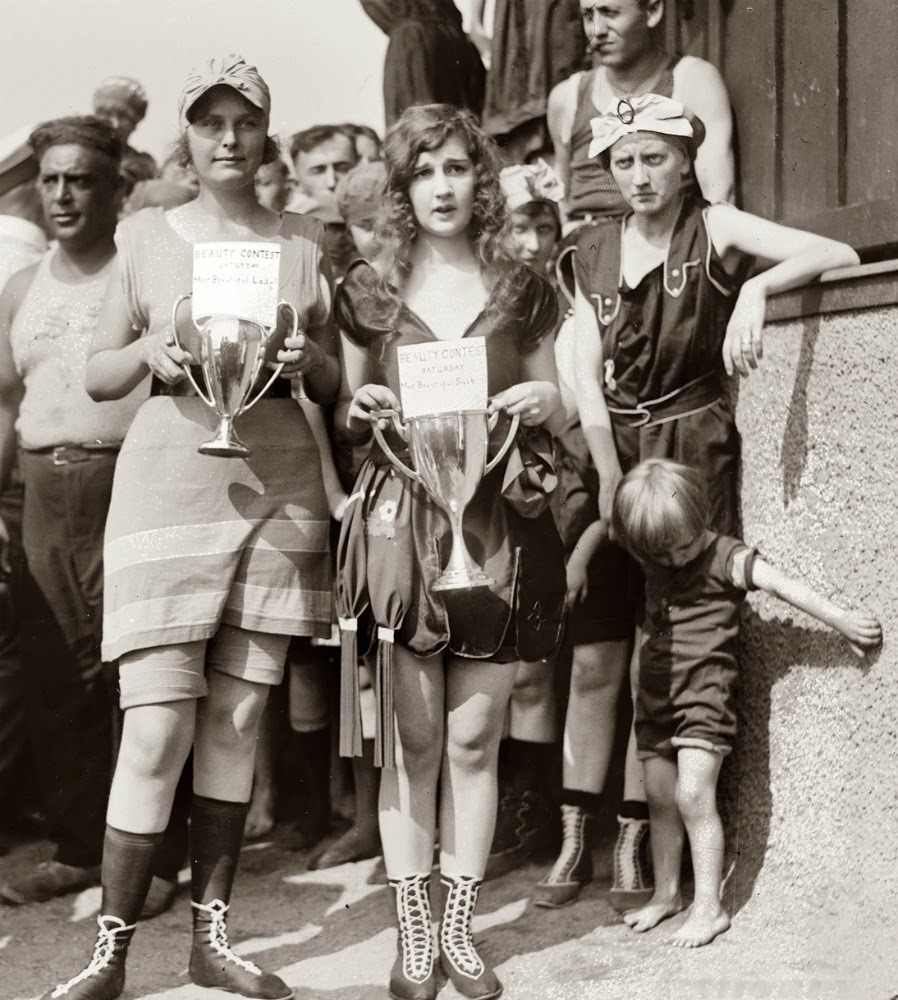 In the last week, I've been invited on two occasions to give my opinion in a "design contest" hosted by 99designs . One contest was for a logo design, the other for a book cover design. The "clients" had whittled down the entries to 5 or 6 designs and had asked their friends and contacts to vote.

99designs is big business, one of the fastest growing crowd-sourcing outfits today. They currently boast a community of 282,249 designers  (although one does wonder exactly how much of a community this is, as they are all in competition with each other.) As a client, you can buy a package starting from €229 for your design project, which will already give you dozens of designs. In addition to logos and book covers, you can have anything else from T-shirts to illustrations to web pages to mobile apps.

This development from what was a somewhat elite industry based on personal connections and contacts to an internet-based democratic platform is an inevitable one, and has obvious parallels with publishing and the book business.

But is the development welcome? Well, there are clear positives. For clients, especially freelancers and small businesses, there are huge advantages. Not to mention all those self-published authors. It's also cheering to think that 99designs may be offering people a chance or a foot in the door - a single mother in a developing country, or a housebound young person in an inaccessible village. However, I would like to know more about how much the designers themselves are getting out of it. I haven't done the sums but if you're pitching against at least 30 others each time, your chances of winning are pretty slim. And you'll only ever be as good as your last pitch.

The emphasis on the website is more on quantity - how many designs you'll have to choose from. I don't know - as a client I'd rather choose from three stunning ideas than thirty so-so ones. And to get a stunning idea, I think that the designer needs to know my brand or my book or whatever it is pretty well, which comes in part from building up a relationship, face-to-face if possible.

Don't get me wrong: I'm pleased that this exists and might even be tempted to give it a go one day.

But you won't catch me signing up for the next step which is called 99strategies.
Posted by Sue Imgrund at 12:50 1 comment: 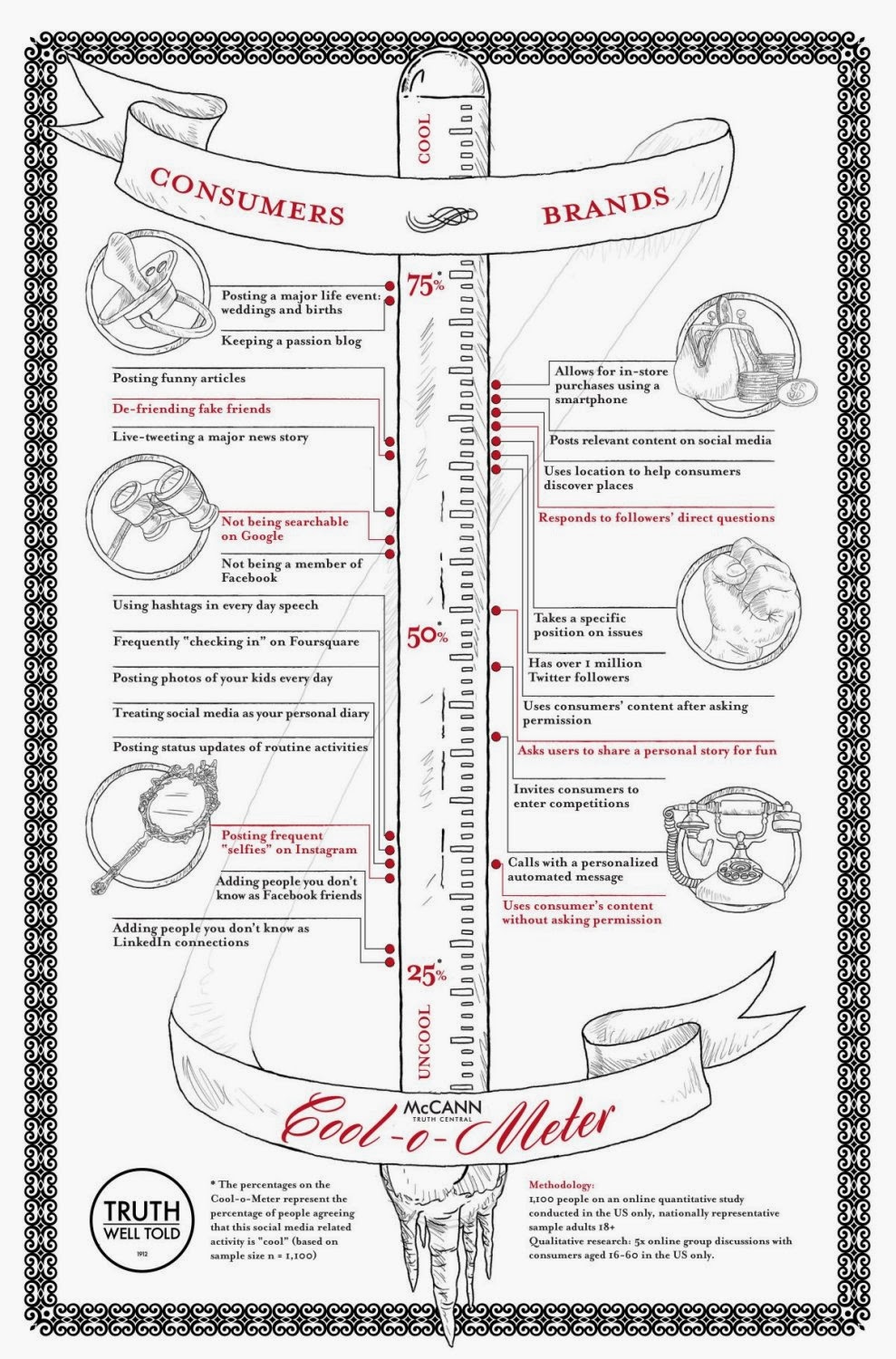 Behaviour is rather like Communication: the plural used to be just that, but it seems these days you have to stick an "s" on the end of both, so today I'm going to be talking Bad Behaviours on social media. From people and brands.

This is mostly via McCann Truth Central who, in their report The Truth about Privacy, looked at which behaviours from people (I do wish they wouldn't say consumers) and brands are judged to be cool, or anything but, in the US at least.

The cooler things you can do on social media as an individual include posting about major life events - babies, weddings being tops, although de-friending fake friends is also rated as pretty cool. As for brands, well, it's "allowing for in-store purchases using a smartphone" (retailers take note) as well as "putting relevant content on social media." Ah, but what is relevant, you may ask. Perhaps answered most easily by looking at what is not relevant.

For people and brands, the bad behaviours are the 4 Big Bad B's:

BULLYING - pretty obvious for people, but for brands, it's stuff like using your data without permission, such as Facebook's "sponsored stories"

BORING - all those latte macchiatos and "I've run 4.33333km" and for brands, the wonders of your production process on your YouTube channel, unless it's done in a particularly wonderful way

BOASTING - I've just checked in at the Ritz/Guess who got 5 As in her A levels?/my book is Number 56 in the obscure-self-published-fantasy-chart/our Facebook page now has 88m Likes (although we bought most of those...)

BEGGING - be my friend/share my funny cat photo/review my obscure fantasy book/like our nondescript Facebook page/send us a picture of you with Bloggo brand...

So, no surprise that the least cool behaviours on social media for people include adding people you don't know as friends/connections and posting frequent "selfies" on Instagram.

And, for brands, inviting consumers to enter competitions and asking users to share a personal story for fun.

So, when you're looking at your branded content, it's a good start to check that it's entertaining, informative or useful.

And that it's not bullying, boasting, boring or begging. 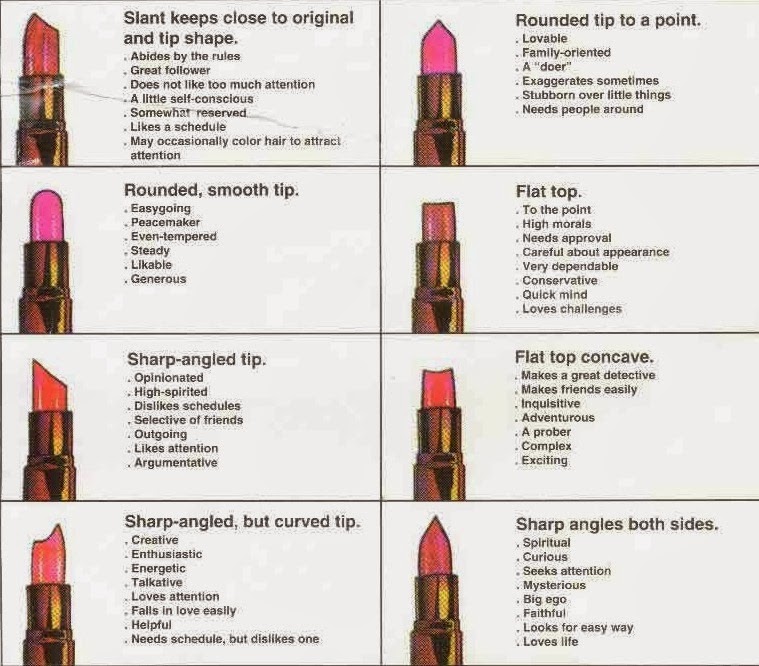 Facebook is littered with them. Personality tests that can reveal which character in literature you most resemble, your ideal career or your core personality type on the basis of which coloured door you'd go through. And no women's magazine is complete without  a check on "which perfume bests suits your personality" along with the usual horoscopes, graphology and numerology features. Some of this stuff is even branded - how you eat your Oreo says more about you than you'd ever guess!

I still love this stuff, even though I know the psychology behind it. Take the example above. I was thrilled to be a "sharp-angled, but curved tip" sort as it means I'm creative, enthusiastic, energetic and all those other desirable traits. But would I have been so disappointed with the "flat top concave" description? Probably not.

The way it works is known as the Forer Effect, after psychologist Bertram R. Forer. In 1948, he gave his students a personality test, the result of which was a "unique personality analysis" for each student. What he didn't tell them was that everyone got an identical analysis. They were asked to rate its personal accuracy on a 1-5 scale and the average rating was 4.26. Forer's "unique analysis" was cobbled together from horoscopes and riddled with phrases of the "at times you are ... but at other times you are ..."

As advertisers and marketers, we make use of this effect in our work, consciously or intuitively. Interestingly, if you read about the Forer Effect, it is associated with manipulation, quackery, deception, gullibility.

I take a different view.

I think it's a great confirmation that, despite our differences, there are commonalities that unite us as human beings. There are universal truths in what qualities are desirable, in how people would like to be seen. Yes, people want to be seen as individuals, but there is also a basic need to belong as part of the human race. And people are not stupid. I'm pretty sure that most people that do these tests sense what's behind them, but go ahead for the fun of it anyway. In the same way that people in group discussions will often state that "I'm not taken in by advertising" before describing how the John Lewis advert made them cry.

One man's manipulation is the next man's empathy.
Posted by Sue Imgrund at 10:18 No comments:

One of the other strings to my strange bow is that I'm an author. I've had one children's adventure story published so far, and a prequel or sequel (depending on how you look at it) will be launched in April.

But I am not here to blab on about my books. I blogged a while ago about the plight of independent bricks and mortar bookshops in the shadow of that ever-growing behemoth, amazon. Since then, the dark side of amazon has increasingly come to light (how's that for a mixed-up metaphor?) and I am particularly pleased to see one new enterprise go from strength to strength in the South-East of England: Daisy White's Booktique.

In my 2012 blog, I may have missed a trick. I defined the battle as being between 'bricks and mortar' and 'online'. Well, Daisy's Booktique is neither, or both, or more. The Booktique pops up in markets, Arts Centres, festivals, town centres, shop spaces and you-name-it. So as well as having all those advantages of a bricks and mortar indie bookshop - personal contact, a venue for more than selling, part of the community, support for indie authors and publishers, there is an added element that's a combination of pleasant surprise, freshness, flexibility and scarcity (in the sense of if you don't go this Saturday, you've missed it).

In comparison to the surviving bookshop chains, there is no Head Office breathing down Daisy's neck telling her to stock just from the major publishing houses, or demanding that authors doing a signing only speak when spoken to, or pooh-poohing the idea of stocking anything other than books, even if it is a beautiful hamper full of "Literary Lusciousness"- books and everything you need to snuggle up and enjoy them, from choccies to cushions.

Most importantly, the Booktique offers something you can't put a price on: a real experience. Whether it's authors and artists networking with publishers, readers chatting with writers, creative collaborations sparking new ideas - this feels like the future.
Posted by Sue Imgrund at 11:44 No comments: