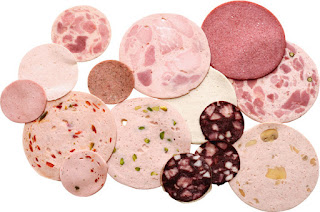 Here comes the second in my series of offcuts from the archives. Apologies as usual to my vegetarian friends for the visual.

At the end of a scorching week, I've got a topical one - an article from March 2007 about Millward Brown's ReputationZ study about the main social concerns on both sides of the Atlantic. 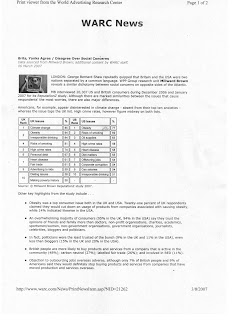 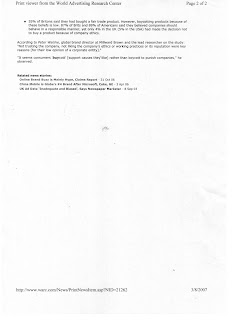 The astonishing thing here is that, while the Fridays for Future protestors were crawling around in their not-terribly-environmentally-friendly nappies, Climate Change was the number 1 concern in the UK. But this topic didn't even feature in the US top 10, with Obesity being the main concern there.

Another finding for those marketers who have suddenly discovered Purpose is that more than twelve years ago there was already a strong feeling that companies should behave responsibly and ethically, although the tendency was for "buycotting" rather than boycotting - supporting those companies you approve of rather than punishing those whose ethics or working practices you find to be lacking. Of course, back in those pre-mainstream social media days, it required a lot more effort to "call someone out".

What about today? I did search around to try and find a comparable study, but failed miserably, so if anyone can help, please leave a comment. I suspect that smoking risks and irresponsible drinking may be lesser concerns today. I did find this article from Grayling which lists the main social issues for the UK as:

In addition, I suspect that plastic, inequality, poverty and immigration would be issues for both UK and US. But look at those top 2 - linked, without a doubt, to each other and related to the explosion of social media over the last decade. Of course, social media is here to stay, so the question is how technology and brands in this area can support solutions rather than further contributing to the problems.

If anyone can tell me where "climate change" now stands amongst concerns in the US, I would love to know.

How often do you see an idea that deftly combines human emotion, the latest technology and doing good for society that's also absolutely on-brand? Not so often.

The idea "Memory Lane" from the energy-provider Stockholm Exergi and their agency Accenture Interactive does all that. The claim (or maybe it's the purpose) of the brand is "Together we make Stockholm warmer" - which can of course be interpreted in both physical and emotional terms.

The technology is reversed-engineered AI voice, so that rather than you asking your voice assistant for information, it will ask you questions - about your early memories, your first love - and record the conversation, eventually capturing this in a book. The agency placed 10 Google Home devices in the homes of people aged from 75 right up to 101-year-old Ingegerd, so that they could tell the stories of their lives.

It's a brilliant idea. Of course you can argue that this would have been perfectly possible to do ten or even thirty years ago, with dictaphones and interviewers.

But. Sometimes the barrier to actually doing something isn't the idea, or the will to do it. It's something purely practical - the expense, the time-consumption, the hassle.

This is a perfect example of how AI can work with human emotion and intelligence, accelerating and supporting it, rather than replacing it.
Posted by Sue Imgrund at 09:47 No comments: 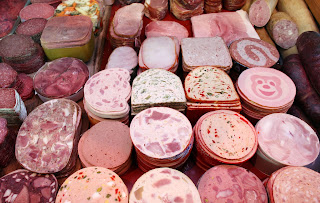 I've discovered a bulging file of cuttings in my office amongst the clutter, and instead of chucking away the lot, I'll be sifting through them to give one or two of the best, the worst and those of particular significance eternal digital life in a new series on this blog.

Welcome to Aufschnitt! This is approximately translated as "cold cuts" and is what invariably greets you at the breakfast table of a German hotel. Which of my collected cuttings are still tasty morsels, and which are well past their sell-by date?

The first in the series is A bluffers guide to social media dated 28th September 2006, written by Antony Mayfield, who I see published a book in 2010 entitled "Me and My Web Shadow." 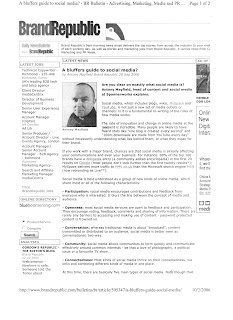 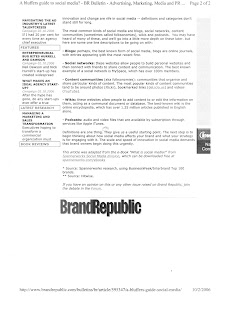 Why did I save this?
I wasn't really "on" any social media in 2006, although I expect I read the odd blog. I distinctly remember thinking that social media was something I ought to know about, but wasn't relishing the thought.

What is remarkable
Absolutely no mention of Facebook or Instagram whatsoever, although Google, YouTube and iTunes get name-checked. And, although social media are described as "online media", this would have meant someone sitting down, probably indoors, accessing the internet via a PC or Mac. Mobile was still very much the future.

What there's no mention of
The dark side of social media - the faking, the trolling, the bullying, the addiction. The shared characteristics mentioned - participation, openness (meaning accessibility), conversation, community and connectedness - still ring true today, but are tempered by experience.

Thirteen years later, social media has become such an integral part of life that it no longer requires a bluffers' guide.

You put the words right into my mouth 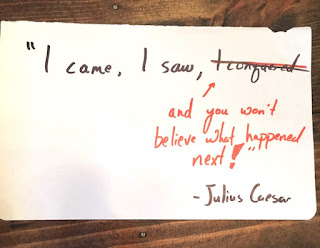 One of the biggest mysteries to me as a writer is this paradox: when asked what they're looking for above all else, literary agents and publishers will talk about Voice, and specifically, fresh new voices.

Yet most of the recent novels I've read recently have felt as if they could have been written by the same person - or even the same AI algorithm. There's very little out there that feels original in terms of Voice (if you must) or what used to be called style.

The homogenisation of language is observable wherever you turn. From novel straplines /Three painful secrets. Two passionate hearts. One forbidden love) through to clickbait headlines through to comments on social media through to newspaper articles.

And in the world of advertising, as this excellent article by Shai Idelson makes clear.

Predictive text is partly to blame, and worse still, what I call assumptive text (all those "Happy for you" "Congrats! Let's catch up" "What an achievement!" suggestions that pop up on something like LinkedIn).

But at the root of it is human laziness. It's so much easier to click on an off-the-shelf suggestion than think up something original and personal.

Please - let's not allow the richness of the English language (or any other language, for that matter) to be reduced to the superficiality of emojis.

Cruel to be kind 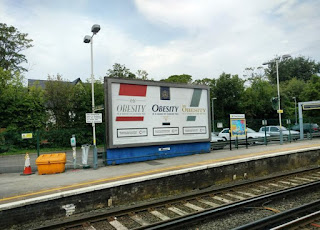 When I worked at Saatchis, the phrase "brutal simplicity of thought" was often used. Whether applied to strategy, media or creative ideas, it meant, in the end, hard-hitting advertising.

These billboards from Cancer Research UK are a brilliant example. It's a campaign to make people aware that obesity is the second biggest risk factor for cancer after smoking. The government has been effective in taking measures to reduce smoking, so the charity now wants to put on pressure to tackle obesity.

What could be a better stop-you-in-your-tracks-idea that mocked-up cigarette packets with the brand name "obesity"? Subtle it's not, but it's very clever, and can't be missed.

But "people" (as the news headlines always say) have been complaining. The complaints centre around "fat-shaming" and "weight-stigma".

Now, this isn't a fashion ad, or a cosmetics ad, or a diet ad. It's public information from a charity to raise awareness. It's neither sexist nor racist. It's the continuation of a campaign that has already proved very effective in raising awareness of the link between obesity and cancer. 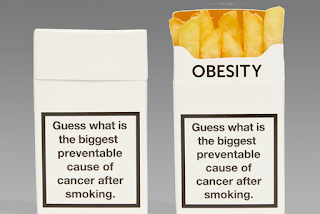 Next time I hear ad people talking about the need for "bold" campaigns, I will remember this one.
Posted by Sue Imgrund at 21:43 No comments: