Free Planning for the neighbours? 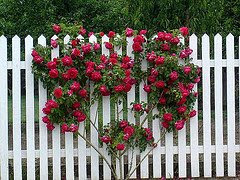 I've found the ideal solution to "Predictably Irrational": a friend has lent the book to me. I'm now about half-way through and it's not bad: Dan Ariely has an amusing way of putting things and his writing does have you questioning things you do in your work and in your own life.
On that very topic, the chapter on social and market norms is of particular interest to me as a freelancer, as I think that what is work and what is social is probably even more blurred for us than for employed folk.
I now know why I feel uncomfortable when neighbours ask me to run a workshop or do some positioning work for their business: I know I can't charge them my normal rates, however much they insist, nor do I really want to do it for free. I can also understand the unpleasant feeling (this hasn't happened to me yet) when a "friend" suddenly produces an invoice for that brand name brainstorming you had over a couple of glasses of red wine.
Dan Ariely has the answer: these are all instances of when social and market norms become blurred: "Asking a friend to help move a large piece of furniture or a few boxes is fine. But asking a friend to help move a lot of boxes or furniture is not - especially if the friend is working side by side with movers who are getting paid for the same task...Similarly, asking your neighbor (who happens to be a lawyer) to bring in your mail while you're on vacation is fine. But asking him to spend the same amount of time preparing a rental contract for you - free - is not."
There are also interesting implications for relationship marketing. Again, Dan Ariely has the answer: "If you're a company, my advice is to remember that you can't have it both ways. You can't treat your customers like family one moment and then treat them impersonally - or, even worse, as a nuisance or a competitor - a moment later when this becomes more convenient or profitable."
Interesting stuff. Now, I wonder if I should offer my friend money for the loan of the book or not?
Posted by Sue Imgrund at 11:27 1 comment:

Books that are the business 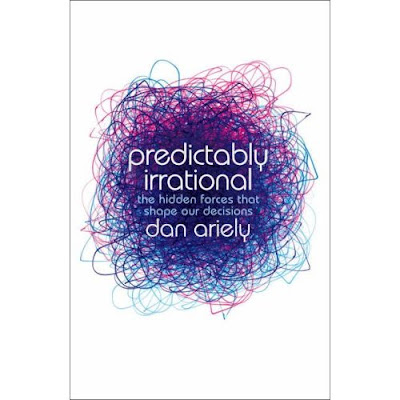 I'm not a great one for buying business books but sometimes, if something jumps out at me often enough from the right sort of places, I may weaken.

Predictably Irrational: The Hidden Forces That Shape Our Decisions by Dan Ariely has jumped out at me a few times in the last week: I spotted it on someone's desk and it was referenced in a couple of blogs that I respect.

The question is this: shall it join my dust-covered collection? Looking at what business books I possess, I've noticed that they tend to be read once (if at all) to say that I've read them - or to appear knowledgeable when a client starts going on about Blue Oceans or whatever...but there are very few that I go back to again and again.

My business books seem to go in phases: the first books I bought (or had given to me) in the early 1990s were very serious stuff by David Aacker and Jack Trout all about Building Strong Brand Equities and suchlike. At the turn of the millenium, everyone went all Brave New World with titles like The New Marketing Manifesto (still a great book, pity about the political party!) by John Grant or A New Brand World by Scott Bedbury or Welcome to the Creative Age by Mark Earls. We then got all those virus and meme-type books and the start of those from the New Business gurus, like Malcolm Gladwell.

The last good business book that I read - that is, one that won't be gathering dust - was Chris Anderson's The Long Tail. So, what does anyone think? Who's read Predictably Irrational? Is it one that will stay with me? Or just another dust-catcher?
Posted by Sue Imgrund at 11:03 No comments: 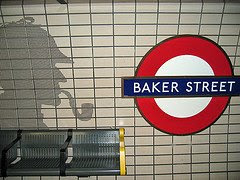 When was the last time you played charades, or whatever the branded hugely-expensive board game version is called? When I used to play charades, we had three media categories: a book, a film or a play. I think that was then supplemented by "a TV show", but that was about the time I put away childish things, or at least pretended to.

I've been catching up on reading lately, having a go at a lot of those classic books that I think I've read, but in reality have only seen a TV adaptation for. Now, most of these books are over one hundred years old and their authors had little choice as to the format or medium in which they told their story. The original format for stories was good old word-of-mouth, but a hundred years ago you were pretty much stuck with the printed word or the stage if you wanted a relatively mass audience.

These days, it's all different of course. Your original medium doesn't have to be the printed word or even film, as Pirates of the Caribbean or Tomb Raider has demonstrated. And with all the merchandising, tie-ins and spin-offs, it's getting quite hard to say what the lead medium for many stories is. It's all like that silly old Watership Down joke: "You've read the book, seen the film, now eat the pie!"

I did wonder what many of the old classic authors would have gone for as original medium if they'd been bright young 21st Century things. Sherlock Holmes would most probably have launched as a real-time internet game, perhaps in an alternative Second Life-like universe. Samuel Pepys, of course, would have been Blogger Supreme. The 39 Steps would have made a great video game, while Jules Verne may have gone straight to Lego for his underwater adventure. Dicken's novels did start their life as serialisations and I can imagine he might have gone for a London-based TV soap opera, full of realism and colourful characters. Treasure Island may have started life as a theme park ride, rather like its modern-day pirate equivalent. George Bernard Shaw may have missed out on the "Pygmalion" stage and gone straight to "My Fair Lady"- style musical spectaculars on stage, in cinema and on DVD.

And I wonder if we would have had a series of biting comedy shows under the banner of "Oscar Wilde presents" with Mr Wilde himself as the cleverest, bitchiest judge of all time on the world's best talent show ever.
Posted by Sue Imgrund at 11:48 No comments:

I went to see the Queen of Reinvention on Tuesday in Frankfurt. Madonna seems to sing "Tick Tock" rather a lot these days (I think it's taken over from "waiting...anticipating...hesitating" as her favourite phrase...) and it did occur to me that as well as being the Queen of Reinvention and the Queen of Pop, Madonna is the Queen of Tick Tock. Everything in her shows runs like clockwork. A Madonna performance is a triumph of straight-jacketed spontaneity, of disciplined decadence, of controlled creativity.

It was somewhat ironic that, once we left the concert, everything fell into chaos. You would expect the Commerzbank (as in Arena) and the German Police to be masters of efficiency and organisation. But a lack of basic signage and zero presence of anyone to shepherd thousands of concert-goers, mesmerised by the Queen of Tick Tock, back to their car parks resulted in countless distraught and tired people desperately seeking their cars in a pitch-black wood.

Now, if Madonna had only been in charge of car parking and signage as well, we wouldn't have had any waiting or hesitating and we would have all been tucked up in bed at least two hours earlier.
Posted by Sue Imgrund at 21:58 2 comments:

Hanging on the telephone 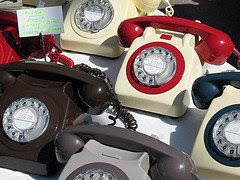 I'm sure that knocking Telekom's Call Centre is rather an unoriginal thing to be blogging on but it's Friday afternoon and I'm not otherwise inspired.

I was amused and a touch annoyed with my latest encounter with these people (I assume there are some people there somewhere!). Having got an e-mail congratulating me on my choice to have my bills (Rechnungen) online, I thought I'd better call them to say, no, I have never made that choice and I'd quite like old-fashioned paper through the post so I don't have to be fussed with printing the things out for the taxman.

Well, they now have a sort of voice-activated selection system where you have to pronounce the subject of your call instead of pressing "1 für Rechnungen" and so on. I expect this has been installed to save time and reduce frustration. Unfortunately, in my case, it increased my frustration. Having been told a number of times that my beautiful pronunciation of Rechnung was not valid, I got put through to that part of the Call Centre which I suspect is reserved for foreigners, people with speech defects and the mentally subnormal. I was feeling like all three by this time.

The cheery lady at the other end immediately enquired as to the name of my tariff. I mumbled that I didn't know offhand, feeling completely humiliated. She then gave me some prompting. Could it be the "Call & Surf Comfort" tariff? I recalled that the tariff did have some meaningless pseudo-English name. Now, come on Deutsch Telekom, make up your minds! Are you an International concern with English product names? Or are you a foreigner-unfriendly blast from the past?

By the way, the Call Centre lady wouldn't have passed my pronunciation test on their ridiculous tariff name...so there! 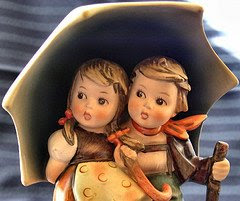 There seems to be a report in just about every newspaper or magazine these days about Germany's population problem and it's all beginning to evoke that glazed-over "come-on-tell-me-something-new" reaction. After all, just how many different ways are there to present the "ageing population"?

But last week a news report came out which opened my eyes again. By 2060, Great Britain will be the biggest European country, population-wise. Now, I think it's debateable whether my countrymen will have admitted to being part of Europe by then, but it is quite extraordinary to think that before too long, that group of little islands will support more people than the vastness of Germany.

While immigration is a factor, the over-riding difference, of course, is in the birthrate. And I have to say that, had I known what I know now about the difficulties of combining parenthood and career in Germany, I might have done things differently. It seems wrong that, as I start to think about the next school for my son, my first criterion is whether they provide ganztags education or facilities, rather than academic standards, philosophy or even location.
Posted by Sue Imgrund at 08:30 No comments: