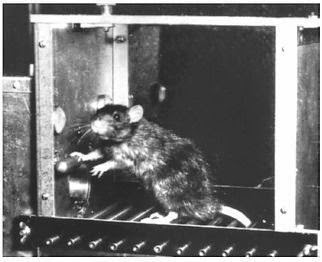 In my psychology student days, I was always rather wary of Behaviourism, that school of thought that says that psychology should be all about observable behaviour rather than unobservable events that take place in people's minds. Perhaps it was due to an uncomfortable feeling that the richness of human experience could simply be compared to rats pressing levers in cages to get a reward or a shock.

The language and principles of behaviourism, such operant conditioning - the modification of voluntary behaviour through reinforcement and punishment - have found their way into many aspects of life today and this is not necessarily a bad thing if those involved are acting with everyone's best interests in mind. We use rewards frequently in parenting and for our own self-improvement ("if I manage to lose 5kg I'll reward myself with a new pair of jeans.")

From Green Shield Stamps to AirMiles, brands have long used the idea of rewarding purchasing behaviour to build loyalty. And technology today means that brands also have the potential to reward other behaviours via wearable devices and smartphones. Trendwatching have identified "Currencies of Change" in their 10 Trends for 2015. The trend is sub-titled "because good behaviour should no longer be its own reward".

Some of the examples cited, such as a brand donating to a food bank when users try low-calorie recipes, are laudable. But as I read on, I began to feel uneasy, as I did with Skinner's caged rats. Not only did I feel that some of these "rewards" were treating adult humans as children (or worse still, lab rodents) but there seems something sinister about people being "rewarded" - sometimes financially - for something that they should be doing anyway. For example, a bank was mentioned that moves money into a higher-interest account for every step taken while jogging, or cyclists and motorists being rewarded for not using their mobile phones while cycling and driving.

Behavioural methods can be useful in the treatment of phobias, addictions and other psychological problems, but it's not the place of a brand to do this.

It's another example of "just because you can do it doesn't mean you should."
Posted by Sue Imgrund at 17:34 No comments: 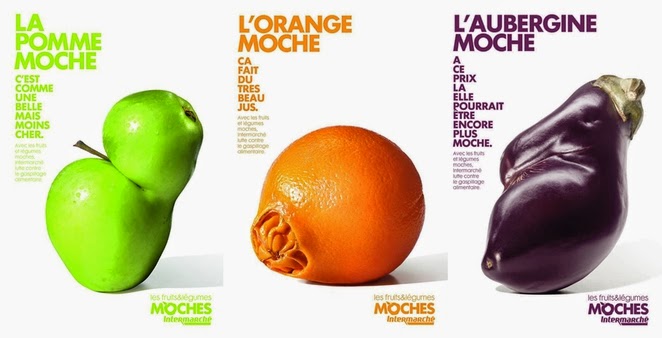 So many brands push for perfection. They want to offer a seamless service, a consistent experience. They claim to be passionate about high quality and strive to be the "gold standard" or "best in class".

But rather like a race of Brad Pitt lookalikes with 150 average IQ, doesn't this all become a little tiresome and, dare I say it, bland?

An alternative is to celebrate the odd, the eccentric, the ugly, the characterful. One of my favourite examples is the Intermarche Inglorious Fruits & Vegetables campaign. Although, having said that, this is far more than a campaign - it's one of those brilliant ideas that make you feel warm and fuzzy inside, like a good bowl of soup.

At Intermarche, the potato with a waspie waist, the aubergine that looks like an alien and the carrots that require an 18 certificate all get sold 30% cheaper as Inglorious Fruits and Vegetables. And they already have their own sub-brand or spin-off of soups and fruit juices, as it all tastes the same once it goes through the blender.

War on waste, increased sales for Intermarche and smiles on the faces of your customers. It's a marketing dream.

And on a similar theme, on the other side of the earth in Melbourne,  is a restaurant which serves tasty soups and other dishes made from "organic waste" aka overripe or ugly vegetables. The name? Brothl. Brilliant!

Best use of (negative) space

I have to admit to loving logos. Not all those horrid swooshy ones, or whatever you get from 99designs, but clever, artfully designed logos with an idea - and a meaning. Or several meanings.

There's a wonderful collection of 40 brand logos with hidden messages here (care of oomph! who have a pretty good logo of their own). Some I've seen before, some are new to me. Some are just brilliant, like the Shelter logo with the "h" made into a house - so simple. Or the Baskin Robbins logo with its pink 31 in the middle. Or, seeing as I'm in Germany, the super Kölner Zoo logo above, complete with cathedral using up the negative space.

All good communication, from logos to TV ads, works best when there are layers of meaning for people to discover. These may work at the subconscious level and quite often the creative people involved will be consciously unaware of the symbolism that they have built into the design or ad. This is because most good creative people work with symbols instinctively, without any dreary analysis of the "which stimulus can we throw into this to trigger X response" sort.

But of course those layers of meaning are in the eye of the beholder and it's worth checking that your brand new logo doesn't have too much unintentional undesirable meaning. There are plenty of logos with hidden swastikas or dubious sexual acts to be seen in the internet, too!
Posted by Sue Imgrund at 18:07 2 comments:

The Spirit of Christmas Present/s

It's time to dust down the baubles, pull on your Rudolf onesie, grab a mug of mulled wine and sit blubbing your eyes out to the latest Christmas ads. Well, if you're in the UK, that is.

As usual, John Lewis have come up with a tear-jerking spot, begging the usual question of whether this isn't actually part-funded by Kleenex. This year it's a cute kid and an adorable penguin called Monty (we know the name from the film title on YouTube. Not sure if it's clear if you're just watching on TV in the old-fashioned way, though.)

I suspect that retailers all over the world are now asking their agencies to "do a John Lewis" and there's certainly a touch of John Lewis schmalz in the latest spot for Tchibo:

But I wonder. Are Germans just as susceptible to this annual weep-fest as us Brits? Have a look at this Christmas spot from Otto, Germany's leading mail-order/online retailer. It starts very much in the John Lewis vein with cute kid and dad. Wistful music. Jingle bells. But then what happens?

When I first saw this, I thought it was dreadful. All that Christmas magic and father-son bonding destroyed by the only spoken line. But then again, it reminded me of the reality. A few years ago, children were writing Christmas Wishes at our local Christmas market. The heartfelt pleas for "my Oma to come out of hospital" "World Peace" and "for my parents to stop arguing" were joined by my son's contribution: "everything from Lego Star Wars."

Maybe in a pragmatic country like Germany, Otto are right. Forget all that misty-eyed tra-la-la about homemade presents and cute kids who put others' wishes before their own, or who have such a brilliant sense of make-believe that a toy penguin becomes real. That's all it is - make-believe for people nostalgic for Christmases that never were. Otto can provide what will really make your offspring's eyes light up - and with the minimum of bother.

But that doesn't stop me dreaming of a white Christmas.

An element of surprise 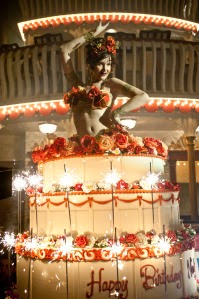 "A true leader always keeps an element of surprise up his sleeve, which others cannot grasp but which keeps his public excited and breathless." - Charles de Gaulle

Who doesn't love surprises? From Christmas Crackers to Crackerjack boxes, our childhoods are packed with little surprises. There are whole brands, such as Kinder Überraschungsei that are built on the idea of surprise.

I think we are surprised less and less as we grow older, which is a shame. And many brands these days are so intent on the pursuit of consistency and transparency that they forget surprise. The media we look at suggests the possibility of surprise through its sheer quantity, but the reality is different. All those headlines from Buzzfeed, now mimicked by what used to be quality dailies which claim "You Will Be Amazed" are tempting, but I find myself increasingly unamazed. Algorithms aren't terribly good at surprising, either. And reading this fascinating article by Tara Hunt, you'll see how so many YouTube videos use identical tropes (to use the hip word of the moment) /are formulaic (to be truthful.) And here are my thoughts about surprise from a couple of years back.

Trendwatching have picked up on this in their latest Trend Report: "Accustomed to now long-entrenched control, transparency and endless choice, in 2015 millions of consumers will find light relief in pursuing just the opposite."

I'm not sure about "light relief". I think that surprise - delivered through novelty and innovation in product, communication, service, pricing and all the rest of the marketing mix is key to keeping customers and potential customers "excited and breathless."
Posted by Sue Imgrund at 10:32 2 comments: