There's nothing more satisfying than a good idea where everything just fits. The product, the concept, the brand, the communication, the timing. Often these ideas come from those New Kid on the Block brands, who are less weighed down from Old School Marketing baggage, Brand Identity manuals and Corporate Guidelines.

So, it's especially cheering when such an idea comes from a brand that's been around for decades, like Volvo.

The idea is Volvo LifePaint, a safety spray for cyclists (and kids' helmets, dog leads etc. etc.) that's invisible at day but shines at night - I used to know quite a few people like that (!). There's a whole website dedicated to LifePaint here.

Volvo have taken their core brand equity - safety - and instead of chucking it out on the grounds of not being exactly scintillating, have re-interpreted it in a particularly Swedish, democratic way:

Road safety shouldn't be for the few... 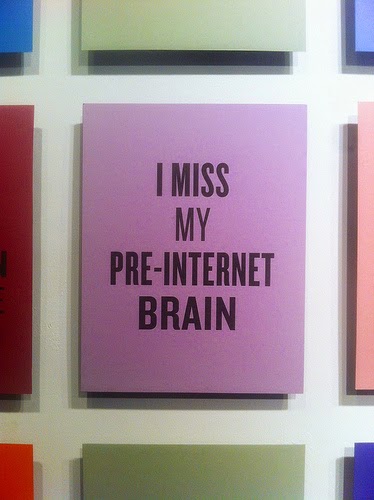 Probably the most resonant of the "21st century slogans" at the Douglas Coupland solo exhibition at Vancouver Art Gallery is this one.

I miss my pre-internet brain.

Now, I imagine that my son (born 2000) would wonder what a pre-internet brain was, and having worked out that it was some sort of vestigial remain belonging to those born way back in the last century, would then question what on earth there was to miss about such a thing.

Douglas Coupland is now 52 and explains his nostalgia so: "I feel like I have willingly or unwillingly become a new person ...we've all been completely, neurologically rewired." Or so: "The internet has burrowed into my head and laid eggs, and it feels as though they're all hatching."

The re-wiring is fact, not just fancy, and it's estimated that 10,000 hours of exposure to a medium - say, the internet, is enough to rewire the neurones. That is less than 1.5 hours per day on the internet for the last 19 years, which I'm sure I must be approaching.

And finally, I have the feeling that my internet brain is transparent, a standard issue, and public property.

Whereas my pre-internet brain was mysterious, original and my own. Private. 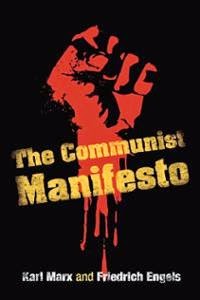 A few years back, there was an outbreak of manifestoes (or is it manifesti?). I'm not sure what the collective noun is for manifestoes, but I'll go for a manifest of manifestoes. They were everywhere, from boardroom walls to your TV screen.

But, like every fad, manifestoes were popular for a reason. They are a nifty, shorthand (usually) way of reminding you what you're about. I have recently found a great example for Planners on the Canalside View Blog. It's a few years old now, but just as relevant for Planners old and new as it was then.

The first point is the best one. Stimulate work that works. I say it's the best one as, years ago, this was our single-minded proposition for Planning at Saatchis. Note that it's about stimulation, not inspiration. There is a difference.

The other 23 points (OK, a bit much, but I always knew Planners did more work than anyone else in the agency!) are mostly good, with some gems and one or two duds (or, rather, generalisations):

Give a sh*t about the work
Create the conditions for great work
Be brave
Go beyond the brief
Speak with authority
Make research your friend
Be multi-faceted
Be a source of clarity (hooray!)
Speak the truth
Define the problem
Embrace iteration
Offer solutions, not just strategies
Shape behaviour
Deal in the specific
Cultivate many relationships
Work through conversation
Beware of Case Studies
See people not consumers (hooray!)
Balance the new and the old
Be interesting
Make something
Work comfortably in public
Have fun

Who wants to be beautiful, anyway?

I don't think of myself as beautiful. And, do you know what? I don't really care. If anyone did call me beautiful, I'd probably find it rather slimy and creepy - in fact, there's something about the word that makes me want to gag. Perhaps it's something to do with James Blunt.

Much as I think that the long-running Dove campaign is admirable, on a number of levels, I'm not too sure about the latest - #ChooseBeautiful. When they started the campaign off, there was a joyfulness, a spontaneity and always a touch of the unexpected about it. But the last few years have seen a succession of formulaic ideas (a "social experiment", mournful music, rather sad women, manipulative pulling-at-the-heartstrings filming with mum-and-daughter, best friends, woman in a wheelchair...). And, interestingly, other advertisers such as Always are beginning to copy the format. Surely this is the time for Dove to make the next leap and move on? Challenge us again?

Maybe Dove should look behind the figures (ha, ha!). It may be true that 96% (or whatever) of women don't think of themselves as beautiful. But do they want to be beautiful?

There are many, many adjectives that I'd prefer to beautiful: attractive, individualistic, bright, eccentric, wise, wild...

And as for those doors, I don't think I'd go through either of them. 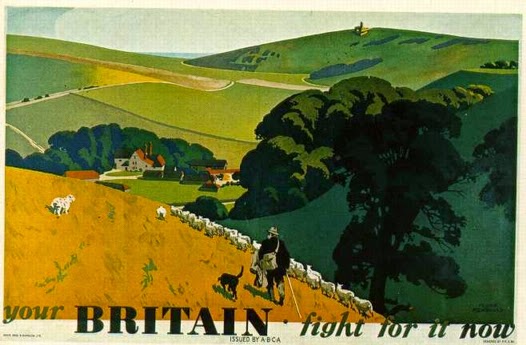 Seventy-five years ago, Britain was bracing itself for a German invasion of the classic sort - aggressive and unwanted - and the way the island fought back is, of course, history. I invaded Germany myself nineteen years ago and a recent trip back to Blighty made me smile at the signs of a more subtle, but ultimately more effective invasion by our Teutonic cousins.

Back in the 90s, German brands were welcome in the UK as long as they were connected to German engineering in the broadest sense - or alternatively, sports and beer. But I was surprised just how many German cars now roll along those British roads and lanes. I suspect that more and more British homes are cleaned and serviced with Miele equipment, with the outdoor areas kept spick and span with a Kärcher.

All of this - cars, sports, beer, engineering - reflects areas where the Germans are generally, if grudgingly, acknowledged to be better than the Brits. At the same time, the Germans lapped up anything from Britain with cheerful abandon and lack of discrimination. Until recently, it was a rather one-sided love affair.

The German exports so far this century have had a different flavour. Less to do with steel and mechanics and more to do with cosiness, family, cooking, tradition, home, childhood. Just look how many German-style Christmas markets spring up in December. Or Easter-egg painting and hunting, as I blogged here.

So many German brands in the area of family and children's food have been successful in the UK in the last fifteen years - often up against stiff competition. Müller, Hipp and Haribo are just three examples. And perhaps the biggest success of all is one often mentioned on this site - Aldi and especially Lidl now dominate the UK grocery scene. It may be taken for granted now, but twenty years ago, challenging the might of Sainbury's and Tesco's was almost unthinkable. And the retail invasion hasn't stopped there. Deichmann now features in many city centres, and there are plenty more shoe and clothing chains where that one came from. Perhaps dm fancies taking on Boots?

Who knows - maybe the British Royal Family will revert back to one of their former names and the whole thing will go full circle.