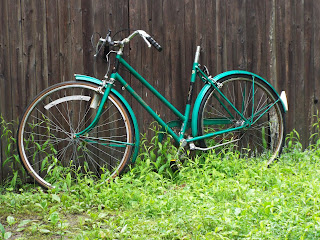 I was asked yesterday if I’d be getting an eBike.

The answer to that is no, certainly not in the immediate future. Why not? For the same reason that I sigh when I read all about the latest “sustainable innovations” praised in the various marketing and innovation newsletters I receive, be these fashion, electronics, cars or bikes.

I have a perfectly good bike and don’t need a new one. Ditto T-shirts, trainers or cars. And I particularly resent “built-in obsolescence” which isn’t just a feature of mobile phones these days.

The uncomfortable truth is that infinite economic growth on a finite planet just isn’t possible. A recent report by Unicef found that if everyone in the world consumed resources at the rate of OECD and EU countries, 3.3 earths would be needed to keep up with the consumption rate.

I do sometimes wonder what’s going to happen to all those eBikes once the novelty wears off - and to the perfectly good bikes languishing in dusty garages and cellars as a result of this boom.

“Within the constraints of the planet" is often added as an afterthought when marketers talk about growth, but perhaps it’s something that should be brought to the forefront more often. The planet is something we must all share. Share in the sense of apportioning something finite, not the more current use of sharing as a term for making public - and quite often, showing off. 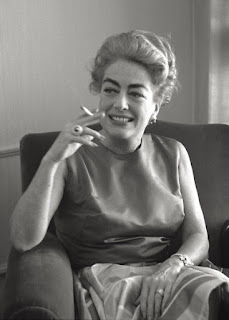 There seems to be no pause whatsoever in the media’s current obsession with menopause. The unstoppable flow of articles from female journalists of a certain age, with their intent on playing a sort of symptom Top Trumps are bad enough. And now there’s a hot flush of “taboo-breaking” ads each trying to out-do the next in terms of “reflecting authentic experiences”, smashing stigmas and general mawkishness.

“Our many, varied experiences are brushed under the carpet by shame and indifference” boldly proclaims one agency representative responsible for these ads. An unfortunate choice of metaphor, possibly, when describing “occasional pelvic floor betrayals (sic)”.

“We hope this campaign can reinject humanity and beauty into the life stage, subvert damaging and demeaning stereotypes and help women feel better supported and less alone. We also hope it’ll inspire people to talk to their own loved ones about the menopause — we all know someone going through it, yet we so rarely talk about it. It’s no wonder one in three feel alone during the menopause” gushes another. Does Pseud’s Corner still exist? Talk about a high horse!

Now, I know some women have a hard time during the menopause, but I do find this “suffering victim” narrative patronising and insulting. Not much better is the shock tactic approach employed by the brand Elvie - not directly about menopause, but certainly confronting one of the symptoms. I’m glad I didn’t have to walk past this billboard with a few small children in tow.

Why does a normal, natural phase in life have to be obsessed over in this way? My own feeling is that this could backfire and do women more harm than good. It brings out the very worst in the loud and narcissistic “look-at-poor-me” brigade.

And the cynical part of me thinks back to a whole category of feminine hygiene products that was introduced round about the time I was growing up - panty liners. Are these environmentally-unfriendly products really necessary for the majority of women? Probably not - yet they were marketed as a hygiene essential - the clue is in the name Alldays.

Both Tena and Elvie have products to sell to help prevent or deal with urinary incontinence. How much of the “normalisation” is geared to getting new users, who could probably cope perfectly well without them, to buy these? Hunger for growth wrapped up in a saving hu(wo)manity script - it would be nice to just press the (meno)pause button on all this. 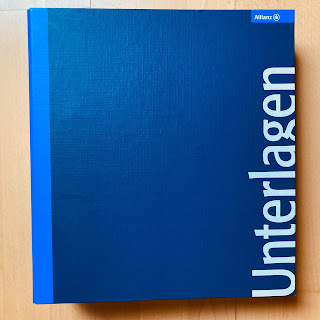 Back in May 2004, I tackled the potentially dreary topic of insurance in Germany, and discovered some fascinating insight into the German psyche. Why wasn’t I being taken seriously at parties? Should I be concerned about my young son pulling a local pooch’s tail and causing untold canine trauma? Why was I so blithely oblivious to the catalogue of disasters just waiting to befall me if I didn’t follow rules and regulations to the letter?

We are moving house at the moment, which is what has inspired me (if that is the right turn of phrase!) to write about the German insurance market. Before you decide that this is only marginally less dull than the market for fishing tackle in Finland, please read on as some of this is surprising and provides an interesting insight into the German character in general.

When I first moved over here, I was a little disappointed when I met people and, on asking what I did and who I worked for (the answer at the time was that I was setting up – no, pioneering – a Strategic planning department for Saatchi & Saatchi Frankfurt) I was answered merely with polite coughing and a rapid change of subject. In the UK, those that work with brands, be it in a marketing department, advertising or brand consulting agency are generally regarded as fascinating folk at parties, full of clever ideas and witty repartee. But, here in Germany, I felt as if my profession was shunned and about as glamorous and fascinating as an estate agent – or an insurance salesman!

I soon came to learn that this comparison was a decidedly unfair one on the side of the accountants, tax advisors and insurance representatives (although estate agents appear to be a reviled species the world over.) Indeed, if someone announces themselves as belonging to any of these worthy professions at a party, they are practically revered rather than reviled. Such professionals deal with the important substance of life, in the Germans’ eyes rather than the hot air and froth that is the province of those of us in marketing and advertising. Rather than being a necessary evil, to be dealt with as quickly and painlessly as possible (and preferably at a good cyber-arm’s length away via the Internet so one doesn’t have to actually talk to any of the low creatures who make this their business) as it is regarded in the UK, insurance in Germany is a fascinating subject to be taken very seriously, even studied, by the layman.

And insurance in Germany is Big Business. In a survey last year, Germans were asked which of a list of areas they would be prepared/happy to spend a bit more money. The results were compared with 1999 data. In both years, top of the list was ‘good food and drink’ with around 50% of the sample citing this as an area where they’d be prepared to spend more. In the carefree days of 1999, ‘travel and holidays’ came joint first place, followed by fashion/clothes and then cosmetics/body care. However, last year, ‘pensions and insurance’ leapt into second place with 44% citing this as an area to spend more on in 2003 compared to only 30% in 1999.

The market for insurance in Germany has some of Germany’s best-known brand names. The biggest and most well-known insurance company is Allianz; 28% of the German population have at least one insurance policy with Allianz. Other well-known players include Aachener und Münchener, ADAC, Hamburg-Mannheimer, HUK-Coburg, R&V Versicherung, Victoria and Volksfürsorge. Most of these big players advertise heavily in the classical media, often with surprisingly creative campaigns.

The range of insurance in Germany is quite bewildering. While we’re happy in the UK with our car insurance, house contents and buildings insurance – and may well toy with the idea of private medical insurance or life insurance, these are just the tip of the iceberg in Germany. Maybe because Germany is so crammed full with rules and regulations (you’ll all have heard the horror stories about not being allowed to use your washing machine between certain hours for fear of disturbing the public Rühe, or peace and quiet, or having to do Hausordnung once every three weeks and keep the pavement in front of the house or apartment block swept clean and free of banana skins and other booby-traps that could catch a passing Fussgänger unawares) that insurance is required should any of these rules and regulations be broken, with drastic consequences. As soon as I set foot in Germany, I was asked to sign up for Haftpflichtversicherungwhich would let me off the hook should someone slip on the ice in front of the apartment block that I’d failed to grit or clear because I’d forgotten it was my turn to do the Hausordnung that week and had better things to do on an icy Saturday morning at 8am. Now that I am a house-owner, I have learned that the house has to have its own Haftpflichtversicherung on top of my own personal policy – the mind boggles.

Perhaps the most bizarre example was, soon after my son was born, I was beset with offers of child insurance policies, covering such eventualities of my son breaking someone’s Wintergarten window with a well-aimed ball or terrifying some stranger’s poodle, necessitating canine psychotherapy. Being rather foolhardy, I didn’t take any of these offers up. I find something rather alarming about the very idea of child insurance. No doubt there were reciprocal policies being sold to grumpy old things to insure against a nasty brat doing their pooch some serious psychic damage.

Perhaps the biggest difference to the UK is the way that people buy insurance here. No-one is terribly keen on buying something so serious and fundamental over the internet – only 18% of the population see online availability as an important factor in deciding on an insurance company. By far the most important attributes are that the company is efficient, trustworthy, stable/serious with a good reputation – even price takes a back seat compared to these attributes. Personal consultation through face-to-face meetings with the representative, either at home or at one’s place of work is how most business is done here in matters of insurance. After all, the internet may be the place to go for something frivolous and frothy like a piece of advertising but when it comes to insurance, there is nothing more reassuring to the Germans than someone in a smart suit who can talk knowledgeably for hours about different tariffs and eventualities. By the end of it, you will even feel like inviting him or her along to your next party to impress your friends about the kind of company you keep and just how well-insured you are!

Eighteen years on and not a great deal has changed, although the big insurers have cottoned on to apps and suchlike. But given the horror of what I experience dealing with UK banks, insurance and financial institutions - from chatbots to being passed through the call centre circles of hell through being asked if I’d like to chat about my finances on Facebook (clue: the answer is NO) - I’m rather pleased that they haven’t gone full digital-first. It’s still possible to see a man or lady in a smart suit, sitting in an office. That’s reassuring for an old-timer like me.

And a quick look at Interbrand’s Top 100 Brands showings the Allianz at No. 34, growing at 17%, and bigger than Netflix, PayPal or VISA.