For me, the best campaigns are not those that are merely "integrated", whatever that means. The best campaigns are those that, like people these days, flit effortlessly from the real world into the virtual world and out again, edges between one world and another blurring as they go.
But I don't think it stops at two worlds. Take the IKEA Campaign for the catalogue start from Germany - Der neue IKEA Katalog kommt nicht allein. At the centre of this campaign is (arguably) a rather traditional and old-fashioned medium - a paper catalogue. But IKEA has surrounded this medium with a story (IKEA designers coming into real German homes to do makeovers) which is played out in the real world, and on the internet via IKEA's own community and what are now known as "earned media".
It could have stopped there. But what I particularly like about this campaign is that it adds a third dimension. After virtual and real, this is a sort of hyper-reality, the world of larger-than-life. The designers don't just sidle into Germany with the next train from Malmo - they are parachuted in. And it's this hyper-reality, which uses the film medium to its best extent that adds stature, greatness and good old entertainment value to the campaign and the brand. Here's some content I couldn't have created myself. And sometimes people need that.
Posted by Sue Imgrund at 15:08 No comments: 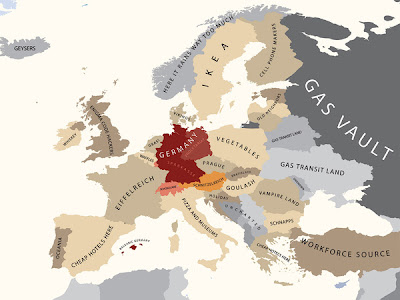 While developing brand communications, we often have to consider the part that the provenance of the brand in question plays. And often, this can be quite different in different countries. While working on British Airways, years back, one of the difficulties of developing a global campaign was the differing perception of Britishness around the world. In the US, this could be summed up as "cute and quaint" while in Australia it centred around "colonialism and whinging Poms."
The latest "internet sensation", Mapping Stereotypes, may be a fun place to start if your brand has European roots. This is a series of maps from a Bulgarian graphic designer (he lives in London) showing Europe from seven different viewpoints. That's Germany, above.
While certainly not PC, the maps are at least a little diplomatic - I am sure that Germany is associated with arguably worse things than "dirty porn" by large sections of the US and UK populations. But what's interesting to me are the brand names that pop up - VW, Nokia and Volvo, for a start.
And what is most gratifying to me personally is that the whole of Sweden is rechristened "IKEA" as far as the Germans are concerned!
Posted by Sue Imgrund at 09:05 1 comment: 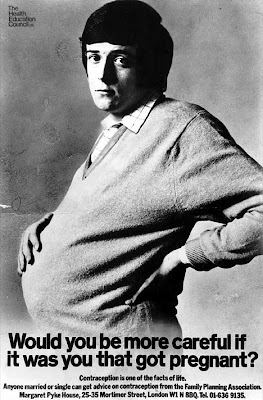 The celebrations for 40 years of Saatchi are underway, with a well-publicised do at the Saatchi Gallery last Thursday. It has to be said that Saatchi is a phenomenon - and I am still proud to have been a part of it.
I joined Saatchis in London in 1988, which was somewhere near the peak of their success. I learned a lot, much of which stays with me today. Saatchis were always good at getting ideas to stick in people's minds.
I suppose most of what stuck can be filed under Jeremy Sinclair's idea of "brutal simplicity of thought" which underpinned the notion of a Singled Minded Proposition and of only presenting one creative idea. I remember a short film - "Hold fast to the original idea. Do not give in to the pressures of the moment." In those days, if the one creative idea was seriously shot down in flames by the client, it was a case of "Rip it up and start again" - or even dropping the client!
I don't see so much of that these days. There are tissue meetings all over the place, pre-tissue meetings, chemistry-tissue meetings, re-briefings and God knows what. There's a lot of cut n' paste and incremental tweaking, and bolting on of this mandatory and that. Many would argue that the world has moved on. It's become more complex. "Consumers" have become more "empowered" or "savvy". Generosity, not brutality is the order of the day.
But when I look back at the way Saatchis worked in the 80s, I do wonder. Was it arrogance, or positive self-belief? Was it inflexibility or was it having the courage of your convictions? Brutal simplicity of thought can also lead to beautifully timeless, highly emotional work - "Real Fires", "Lanson" and "Intercity Relax" were three TV spots of the time that are as fresh in my mind now as then.
Times have changed. Now that we have had a real pregnant man, the poster above loses some of its shock value. In the words of the Kinks, it's a mixed up, muddled up, shook up world. Which is why, I believe, brutal simplicity of thought - and I am not talking messages or propositions here - is our main hope against wooly, vague and indecisive thinking in communications.
Posted by Sue Imgrund at 09:58 No comments:

A new perfume has been developed by the French fragrance company, Etat Libre d'Orange under the Sex Pistols name. Available in France and the US, the fragrance claims to "exude pure energy, pared down and pumped up by leather, shot through with heliotrope and brought back down to earth by a raunchy patchouli." The publicity material for the perfume also includes a list of must-dos for the potential wearer (resist tradition, fight conformity, express yourself with abandon...) and a reference to the "unruly turbulence of a prune."
As I see it, the only unruly turbulence that prunes are probably creating for the Sex Pistols these days is in their stomachs in combination with too much All Bran in an over-zealous middle-aged breakfast. But the perfume launch has brought plenty of comment ranging from the dreadful puns ("Pretty Fragrant") through to the disappointment that it smells of heliotrope and patchouli rather than cat piss/gasoline/stale sweat/ spilled beer/sick or cold cigarette smoke (sic.)
And there are those who are saying punk is dead.
But punk isn't dead. It's alive and laughing all its middle-aged way to the bank. And if Malcolm McLaren is turning in his grave, it's only because he's not getting his cut this time.
Posted by Sue Imgrund at 16:51 No comments: 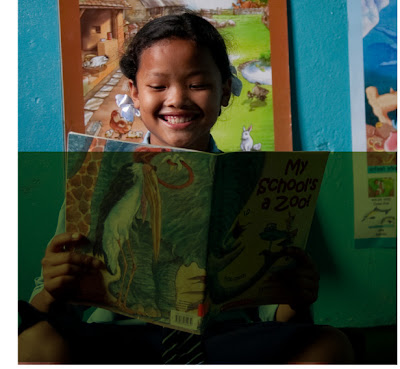 It's ironic that I learned my alphabet in a country where the literacy rate for females is still only around 35% (c/f males at over 70%). So maybe I have never really taken being able to read and write for granted. If I'd been born a native of that country, the chances are that I would not be able to read or write today, in 2010.
When you think about it, one of the developments of the modern world is the increased presence and power of the written word. We very rarely make phone calls these days when we can send an email, tweet or message of some sort. OK, some of this "written word" may be barely intelligible as English (or whatever language) - from text messages to YouTube comments.
Next Wednesday, September 8th, is International Literacy Day and my friends at Red Spider have been working with the non-profit organisation Room to Read, which promotes literacy and gender equality in education around the world to develop a campaign via social media to raise awareness and invite donations.
Without giving too much about the campaign away, it will be an ingenious way of using social media to show what it's like not being able to read. Check out the Facebook Page if you're interested in getting involved in the campaign.
Which reminds me - I've got Facebook running on Pirate English at the moment - which I understand even less than most YouTube comments.
Posted by Sue Imgrund at 11:45 1 comment:

As a freelancer, I sometimes wonder if I should set myself up as a proper company, rather than carrying on as the flexible sort of one-man-band that I am. I've got a cracking name in Secret Agency so I guess it would probably involve getting a proper logo done and a sign by my door and maybe tightening up exactly what my offer is a touch. But usually, the whole idea of the bureaucracy and admin that's involved in Germany for setting up a company makes me shy off.
But I'm always interested when people I've worked with in the past set something up. The latest one I've seen is the Radical Company, newly opened for business in Camden and a number of other locations around the world. Apart from their radical attitude, the company has made a focus on digital media their point of difference.
I suppose that I would not have been surprised had the Radical Company been set up by an ex-colleague of recent times, one of my former interns or someone of similar youth. But the great thing about it is that it's the brainchild of someone who I associate with the golden age of Saatchis and TV advertising - Graham Thomas. Instead of joining the "things were better in my day" crew of old advertising hacks with their Mad Men-wannabe tales of non-stop champagne, cocaine and rock & roll, Graham has looked where things are heading and sprinted right off in that direction with the speed of a teenager.
I wish them all much success.
Posted by Sue Imgrund at 12:40 No comments: