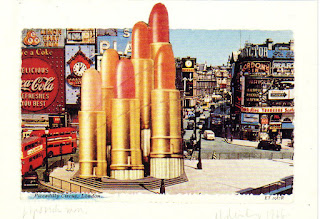 The Piccadilly Lights have to be my all time favourite outdoor advertising site. As a teenager, the Claes Oldenburg picture above was one of my favourite art works, and possibly one influence that drew me into advertising as a career.

What I love about the Piccadilly Lights is the combination of tradition and innovation, and the way this advertising site reflects the changing social, cultural and technological landscape.

The first illuminated sign in the area appeared over a century ago - for Perrier, in 1908.

In the 1930s, neon technology took over, with signs for brands such as Bovril, Schweppes and the first appearance of the famous Guinness clock. 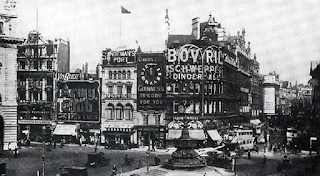 Coca Cola first appeared in 1954, and in the 1960s, brands such as BP, Skol, Players and Cinzano had their names in lights. Here's a picture from the early 70s.

By the 80s, tech brands had taken over largely from food and drink, although McDonald's first appeared in 1987. Here's a scene from 1985. 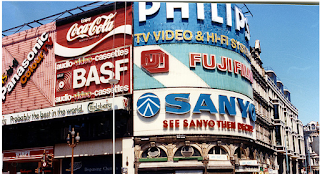 Not all these tech brands are still with us, and as their fortunes changed, so did technology itself. In the 1990s, the lights began to go digital, and in the new millennium,  LED displays came to the fore.

The Piccadilly Lights will relaunch in late 2017 as 'the largest single digital screen in Europe' aka 'The Curve.' Participating brands will include Coca Cola, Samsung and four more. The digital LED screen will be able to do all sorts of nifty stuff - real time, co-creation, social media and all the rest. 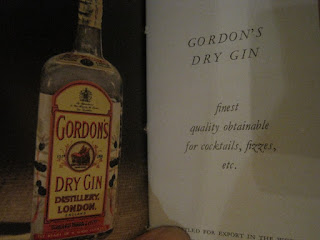 As my last post before Christmas, to get into the right spirit, I thought I'd show you a rather charming piece of branded content from bygone years - the spirit of Christmas Past, if you like.

The first excuse I need to make about Gordon's Recipes for Cocktails and other Mixed Drinks is that it refuses to go digital. The little booklet has a spine as stiff as a subaltern's upper lip, and I'm certainly not going to destroy it through flattening on the scanner. It has survived (I'd estimate) sixty odd years, so that doesn't seem quite right.

It may be a little book, but it has a Big Attitude, as we'd say these days. If anyone wants to learn anything about Brand Voice, look no further:

We should, therefore, like to emphasize the fact that, to obtain the desired results, GORDON'S LONDON GIN and no other products must be used where mentioned. No other brand would be 'just as good'

When calling for your favourite Cocktail or other Gin drinks at your Club, Hotel or Bar, always specify 'With GORDON'S GIN,' ... 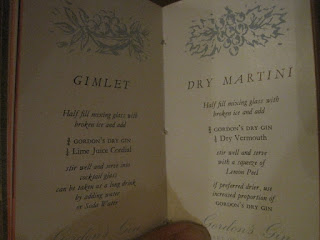 The little book is full of recipes, should you wonder how to make the perfect Gimlet, Gin & It or Singapore Sling. In addition, there are some delightful pictures of the product range: 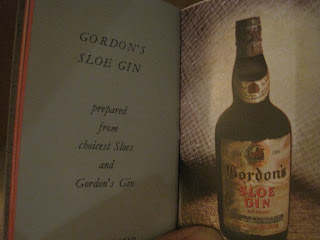 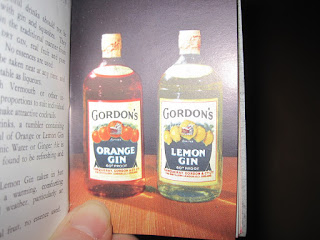 No-one could accuse Gordon's of not moving with the times, either. There is even a recipe for a 'Television Special'. I wonder if the company employed an army of Trend Scouts and Insight Miners to come up with this one? 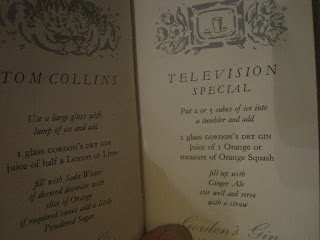 I'll end, as the little Gordon's book does, with a toast:

A TOAST
"Here's a toast to all who are here,
No matter where you are from:
May the best day you have ever seen
Be worse than your worst to come"
Posted by Sue Imgrund at 11:15 No comments: 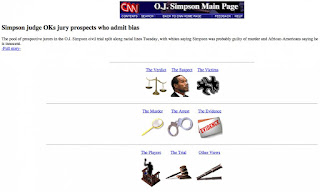 Do you remember the first time you went on the internet, meaning the www? I was thinking about this the other day, and I came to the rather sad conclusion that I remember it no clearly than the first time I saw TV. Maybe there are people who recall exactly which site it was, and when they did it, and the sense of wow and awe and everything else, but for me it seems to have been something of a non-event. Ditto email. Here, I can only remember impossibly long and unmemorable email addresses composed mainly of digits. It all seemed a dreadful faff compared to picking up a phone.

Although I was probably 'early majority' rather than 'early adopter', I do have a pang of nostalgia for those early days. From a design point of view, the last-century websites already have an Olde Worlde charm - just take a look at some of these, including TheFacebook, Ask Jeeves, AT&T and Yahoo!

Even more fascinating are the 'antiquated websites that still exist in their natural state' - for these, have a look at the wonderful collection on 404pagefound  . It's a great name for a great site, started in 2009 by Tim Katlic and dedicated to the survivors of Web 1.0 - news sites, games, graphics, academic sites, all in their blue hyperlink, Comic Sans, black background glory!

I do wonder what websites will look like in 20 years, if they still exist. Will we be talking about a post-internet world already?

It's been a while since I wrote about sausages, and every time I see my blog title it's a little reminder that I should find something sausagey. So here we are - a great British brand, the man behind it and a special message for Christmas.

Wilfred Emmanuel-Jones bought his farm on the Devon/Cornwall borders in 1999, following a successful career as a TV producer and director. The locals who helped him while starting out inevitably referred to him as 'The Black Farmer,' so when Mr Emmanuel-Jones had an idea for a sausage brand for those with coeliac disease (and anyone else who fancied tasty gluten-free sausages, produced with the RSPCA's assurance), this was the natural choice for the brand name.

A brave brand name, which reflects the character of its founder. The TV ad above was a co-operation with the legendary Tony Kaye, and is quite unlike any sausage commercial ever seen before, with its mix of music, poetry, flamenco, Morris dancing - and bangers.

The product range has extended beyond sausages to meatballs, burgers, chicken, bacon, eggs and cheese. In addition, Emmanuel-Jones set up The Black Farmer Scholarship to encourage young people from inner cities and ethnic minorities into farming.

The Black Farmer has so many of the qualities of a great brand: uniqueness, integrity and attitude a-plenty: 'I am black, red, white and blue.' 'I will not be confined by race, convention or tradition.'

Wilfred Emmanuel-Jones has had leukaemia in recent years. The treatment has - ironically - destroyed his skin pigmentation in places. But for this Christmas, he has produced another extraordinary TV ad, this time to help raise funds for the charity Hope for Tomorrow, who provide mobile chemotherapy so people can get treatment closer to home.

Coming to your TV screens - I believe - just after the Queen's speech.

The untrendy strike back 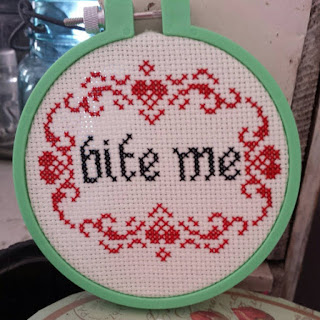 I was amused (and a little dismayed) to read Charles' Vallance's perceptive piece in Campaign recently - Trends aren't trendy any more. Starting with the story of the hipster trendspotter who wouldn't bother interviewing Brexit voters as they "... don’t set trends, they tend to be older. They’re less experimental and don’t live in London," the article examines the rather "untrendy" but clearly happening trend of social conservatism. This mass trend underlies movements in politics and society from the knitting revival to the election of Donald Trump.

I've already blogged about why the polls got the Brexit vote so badly wrong, and I think exactly the same dynamic happened in the US election. We don't learn.

The article addressed a number of things that have been puzzling me recently:

1. The tendency for people who work with brands and in consultancies to put their heads in the sand (or ignore the elephant in the room - choose whichever overworked African wildlife cliche you prefer) when it comes to what really drives and motivates people - the majority of everyday people, mainstream people, if you like. Because it doesn't fit with their worldview. I am against Brexit, but that doesn't stop me wanting to find out why people think, feel and vote as they do.

2. Maybe worse than the first option is consultancies who recognise this trend, and then try and sugarcoat it so it does fit their worldview, which is exactly what Trendwatching have done. This consultancy, in their 5 Trends for 2017 has made the distinction between the 'New Global Citizens' and the 'Nation Nurturers'. This latter group, or trend (it's not really clear which) will 'favo(u)r a turn inwards, seeking solace in the familiar.' Which seems all very well, but brands are warned that 'branded displays of faux patriotism won't fool consumers for long.'

Not sure. It will depend on who is defining what 'faux' is.

3. Having been a bit sniffy about  Trendwatching and their slightly naive (or is it patronising?) attitude, I must say I enjoy reading their bulletins, and those from Springwise, as well as reading 1843 magazine. Here, I can step into a bright and shiny world of apps for everything, contactless payments, smart homes and reality in at least three variations on virtual. But then I go back to my car that's 10 years old and my 'new' iPhone which is an iPhone 5, and argue with my son about the pointlessness of Spotify for someone of my age who has as many CDs as I do.

4. When I started out in this business, we used to do Group Discussions (they weren't called  Focus Groups then) in people's homes. These tended to be in very untrendy towns and suburbs at addresses that were almost impossible to find in those pre SatNav days. And I must admit I would often feel uncomfortable in those homes. There was no one-way mirror and soundproofing to hide behind and make snidey comments. As a junior from the client or agency, it was easier - you'd be passed off as the researcher's assistant and could sit there and help with the tape-recorder. But more senior clients had to be instructed on how to behave - take off their tie, don't arrive late, don't interrupt, don't snigger. Needless to say, you often heard opinions you didn't like. Not just about your brand, but about the world in general.

The move from Group Discussions in suburban homes and face-to-face street interviews to the internet via research studios and telephone has meant that we have lost touch with the people who buy our brands. Yes, of course we can analyse Tweets and Instagram posts to see what people are saying about a brand or a market, but this is all what they choose to project, not what's really there.

And if one thing has characterised this year in marketing for me, it's a leap forward in diversity and inclusion in some respects, but a huge step back in others.

It seems these days, in the world of advertising and the media, that diversity of opinion is not welcome.
Posted by Sue Imgrund at 14:03 1 comment: