Meanwhile, down at the Brexit Arms ... 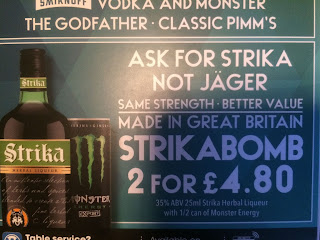 A taste of things to come?

I noticed this piece of communication in a local town pub, here in the Home Counties. Note that this is one of those cheap-and-cheerful chain pubs, not some fancy-pants Gastro place (by the way, I can never think of Gastropubs without thinking of either Gastropods - not so bad if you're into Escargots - or Gastroenteritis. Not so good at all.)

In addition, there was a huge display of gins with as many flavours on offer as the Vape shop across the road. I'm guessing one reason that gin has become popularised is that it is so unashamedly British (if you forget the Dutch connection, but then again, didn't we have some Royalty from over there at some point?).

While the Gastropubs are carefully framing their British offering in "locally-produced, hand-farmed, pan-fried by hipster artisans, sustainability heaven" kind of terms, the cheapo pubs are blunt about it - see above. It doesn't actually say "don't waste yer hard-earned cash on that over-priced filthy foreign muck" but it might as well.

What next? Will Irn-Bru launch an Aperol alternative?

Will it be a return to "British Sherry" this Christmas? 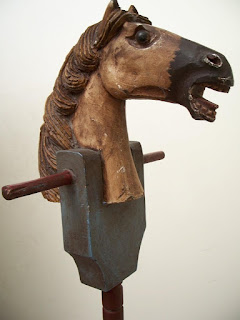 "If you're doing 'consumer safaris', your alienation from the real world is total and complete."

That's one of my favourite lines from Martin Weigel's latest blog post, Escape from Fantasy.

A lot of blog posts I read tend to approach one ear, then turn around and slink back off into the morass of jargon that is LinkedIn. But this one hasn't just stuck in my mind, it feels worthy of regurgitation so I can rapidly find it again. It would have been pinned on the wall in the old days, I guess.

It's well-written (if a little finger-pointy with its "we do this/that, we think this/that" style which I have a personal aversion against), compelling, funny and pinpoints the biggest problem of the brand communication industry today - this industry is based in a parallel fantasy world.

The evidence for this is not difficult to find and ranges from giving groups of people super-heroesque labels, through to my particular hobby horse - the aversion of a lot of planners these days to getting away from their desks and screens. "Far too many planners are no longer in constant, direct, unmediated contact and dialogue with people."

The solution - to "do what others do not, can not or dare not do to" is simple. It's about finding the truth - "the truth of real people in the real world."

One small area where I'd take issue, though, is the area of "we are nothing like the people we serve." It's simply not true, if you go under the surface demographics. We are all human beings, with the same basic needs and motivations, even though these may be expressed or fulfilled in different ways. And this is part of the solution, as far as I'm concerned. Advertising, or whatever it calls itself now, is probably always going to be dominated by young people. But if those young people are worth their salt as planners and creatives, they will at least try to get into the mindset of someone older, someone different, someone who is outside their immediate experience. Perhaps by finding common ground in the way that person feels, what's important to them.

And always remember - "the consumer" only exists in Fantasy Land. 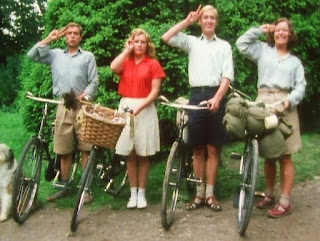 Nothing says childhood summer to me stronger than the works of Enid Blyton, and specifically, The Famous Five. Even if they didn't start off being famous, over 75 years ago, they certainly are now. I'm not a huge fan of calling fictional characters (or authors for that matter) a "brand" - I don't know why, but the reduction of a human being (albeit a fictional one) to the level of a packet of washing powder seems demeaning. But bear with me - this is more about what brands can learn from this frightfully long-lived five-some.

The original book, Five on a Treasure Island, was published in 1942, and others in the series soon followed, accompanied by games, birthday cards, stationary and, of course, jigsaws.

The books remain in print, and are still extremely popular, although the cover designs and illustrations have changed over the years. From the print medium, it was inevitable that the Famous 5's exploits would soon transfer onto film, and so it was, with the first feature film appearing in the 1950s, and TV series running in the 1970s and 1990s, complete with the associated annuals: 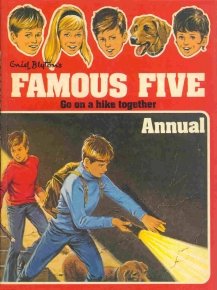 In marketing, we often talk about a brand becoming part of the culture, and a sure sign of this happening is when the jokes, parodies and T-shirts become part of the social fabric. Who, that was young in the 80s, will ever forget the Comic Strip's Five Go Mad in Dorset?

As brands get long-in-the-tooth, their managers begin to fret: are we keeping up to date? Are we still appealing to today's young generation? Is it enough to change the shorts and long socks of the original illustrations to hoodies and sweat-pants? The text of the books has been subject to a little bit of correction, some of it practical (decimal coinage) and some of it political (tweaking attitudes that are not acceptable today).

As the Famous Five moved into the digital age, a new spin-off cartoon series was created, featuring the 5's offspring, right up-to-date with all the latest technology: 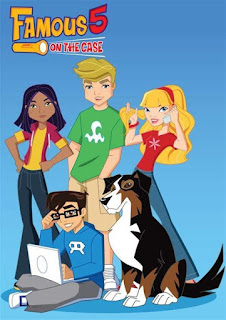 The parodies continue, and anyone that has been in a UK bookshop in the last year or so can't have failed to notice this and the others in the series: 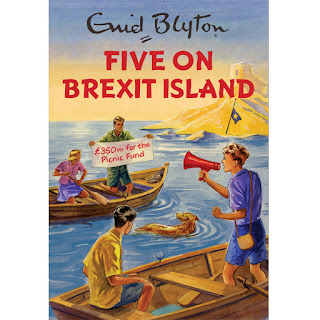 Some brands get terribly huffy about parody and spoof. I don't know if there were any legal battles surrounding Brexit Island and Co. but as an outsider, it's easy to see how this bit of affectionate fun hardly damages the "brand" - rather, it reinforces it. I wouldn't be at all surprised if sales of the original books have taken off again since these take-offs hit the shelves.

Which all brings us nearly up to date. Where are the Famous 5 off for their next adventure? Well, in marketing terms they're doing a bit of a co-operation. Or is it a celebrity endorsement?

Mine's a meat paste sandwich with lashings of ginger beer.

What looks good on paper ... 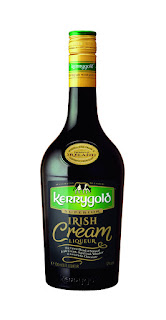 I've spent more than enough years working on brand extensions of this, that or the other and the question has always been - how far can you go? The answer to that one depends on the brand, and just how flexible and stretchable its essence really is. And what's vital to the brand's coherent meaning apart from its essence.

I saw a classic example (in my opinion) of a step too far in the supermarket this weekend: Kerrygold Irish Cream.

Now, I can just imagine the brainstorming or workshop that led to this one. The core of the Kerrygold Brand Onion (Cheese and Onion, anyone?) has probably got the words "Irish" and "Dairy" in it. So some smart Alec (or Alexa) no doubt put one and one together and thought: "I know! Let's copy Baileys!"

This probably looked like a great idea on a flip chart decorated with neon Post-Its.

But, if you have to take the onion model, what about all those outer layers? If you ignore those, you can quite easily come up with something that stands in opposition to them. I'm not a fan of the onion method for defining a brand - I prefer to get an intuitive feel for brands via long-term knowledge and experience, and from my feel for Kerrygold, I would suggest the following:

Kerrygold is an everyman/woman/child brand - for all the family, not just the niche segment of middle-aged girls who drink sickly-sweet liqueurs

Kerrygold, if it has a time of day, is about morning, the sun rising, breakfast-time, the twittering of the birds and the dew still kissing that lush green meadow

Kerrygold, if it has a place is outdoors, with beautiful rolling emerald fields, an azure sky, buttercups and daisies

And finally, Kerrygold is savoury in taste - lightly salted butter, mellow cheddar kind-of-savoury. Kerrygold wouldn't (I hope) go into chocolate, so why a chocolate liqueur?

I wouldn't want Lurpak to copy Häagen-Daz and go into ice cream.

And neither would I advise Cadbury's to start making cheese. 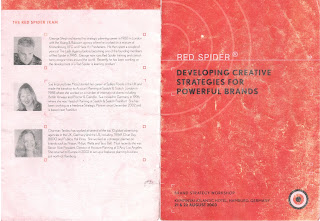 It was with great sadness that I heard that one of my planning heroes, Charlie Robertson, has gone off to the great spiderweb in the sky. Charlie was one of the second generation of sparky British planners who worked in the London ad agencies of the early 80s - that generation which includes Paul Feldwick, Leslie Butterfield and Damian O'Malley.

Although I say second generation, Charlie was no follower. Having worked at the places to be in London in the 80s - BMP and BBH, he founded the planning department at the Leith agency up in Scotland, where he preferred to raise his family. Charlie already knew London wasn't the be-all and end-all of everything, and this led to his masterstroke - he founded Red Spider, the world's first virtual planning and strategy agency.

Why should strategy, and the bright minds behind it be confined to four walls in Soho, or Charlotte Street? This was pioneering with a capital P.

By the time I became associated with Red Spider, in 2003, the web had spread. I spent an enjoyable few years as an associate Spider, under the guidance of Charlie and George Shepherd, running training workshops on strategy tools and busily devising "Brand Redprints.". Those tools - which Charlie and Co. were generous enough to make public property, more or less (on the assumption that anyone can pick up a paintbrush, but only Picasso can create a Picasso) - are still being used around the world today. It was Charlie who urged me to join Facebook and a whole load of now defunct social media sites back in 2007 or so.

Charlie was astute, witty, sharp as a needle and humane. His hair seemed to have a life of its own. He didn't shy away from saying exactly what he thought and he was an enemy of both blandness and bullshit.

He'll be much missed. I'm grateful to have known him. 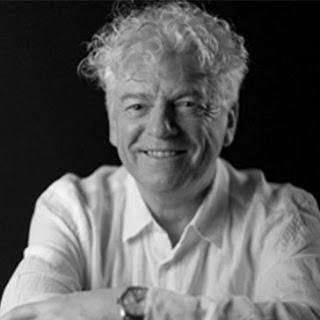