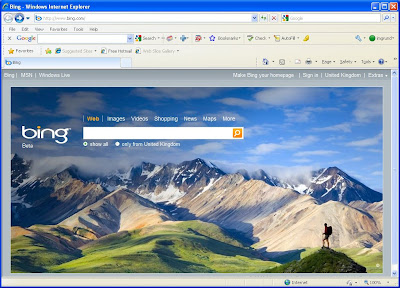 Microsoft are launching Bing in the U.S today. Bing (still in beta here in Europe) is Microsoft's challenge to Google. Interestingly, they are insisting that it's a "discovery" engine and not a "search engine", in order to suggest the next generation, I suppose. Although to suggest the next generation, I might have tackled the word "engine", which brings to mind steam fairs and the Rev. Awdry and gone for something like "rocket" or "missile".
And the ad agency don't seem to be letting this insistence get in the way of a good slogan: "The Sound of Found". I would have thought that "found" has a lot more to do with "search" than "discovery". But it's a lovely slogan, even if oldies like me still think that Bing is actually "the Sound of White Christmas".
Trying the thing out today, I did the usual narcissistic thing of typing in my name and finding images. Totally spookily, when I put "Susan Imgrund" in, a picture of my old boss, Rita Clifton, popped out! Nice to know she's still watching over me after all these years, anyway.
Has anyone else tried it? Is it really the next big Bing?
Posted by Sue Imgrund at 11:03