5 reasons why checklists should be delisted 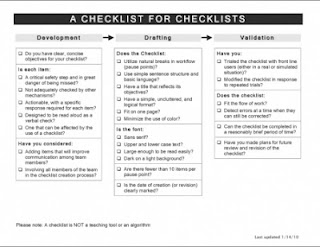 Checklists and rating cards seem to have crept into just about every aspect of modern life - no sooner have you bought something over the internet, or had a conversation with a service chappie or chappess on the phone, when you're sent some kind of rating card. Restaurants and hotels, even in the most far-flung of places, beg you to rate them on TripAdvisor or to "like" their Facebook page with such an intensity that you get the impression that this is more important than you having enjoyed the experience, or getting a good tip. But these ratings are more pointless than pointless as they can be bulk-bought these days.

There are also checklists to download from the internet for everything from picking a Eurovision Song Contest winner to buying a home to having a baby.

On the work front, checklists abound too. They are usually introduced under some pretext of "having everyone singing from the same song sheet" like some weirdo culty choir. And, although their perpetrators are usually keen to point out that this is just an aid to decision-making, the sad truth is that many people use checklists and scorecards to make the decision for them. And often, getting a good scorecard seems to be an end to itself.

Why should they be delisted? Well, where to start? Checklists are a lazy way of working that avoids intelligent thought. They generate extra pointless work - who hasn't been in a meeting where the "items on the checklist" are discussed at length? They - or their perpetrators - invariably make the mistake of thinking that what can be measured is what is important. They're held up as being a shortcut, but a shortcut to what? To making a good decision? Or to have ticked a number of boxes with arbitrary  headings?

And maybe the most important reason to delist checklists is that the mere process of pre-defining categories (usually based on past experience) is a classic case of rearview mirror thinking which excludes the possible.

If the questions remain in a fixed circle of ideas, then so do the answers.