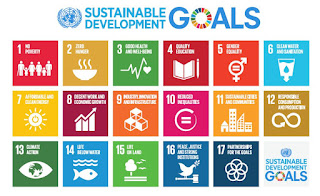 As a manufacturer or retailer intent on doing Good as well as making a profit, you could do worse than using the UN's 17 sustainable development goals (aka 'Goals to transform our world') as a framework for action.

Announced recently at the World Economic Forum at Davos is an initiative from P&G that hopefully will have some impact on goals: 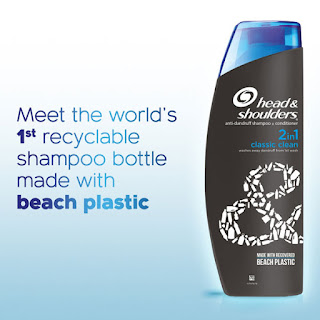 Head & Shoulders in the '1st recyclable shampoo bottle made with beach plastic' will be available at Carrefour in France this summer. The bottle is made with up to 25% recycled beach plastic, (PCR = post-consumer recycled ) and P&G have developed this with recycling experts TerraCycle and SUEZ.  Numerous technical problems had to be overcome such as UV exposure and degrading of plastic.

Now, yes, it's 'up to 25%' and, yes, it's only going to be available in a limited run in France, and, yes, P&G haven't got the cleanest slate in other areas of responsible production (record on animal testing),  but I do think this is a great step in the direction 'part of the solution instead of part of the problem.' Hats off to P&G (which I can happily do if I use Head & Shoulders.)

Using beach plastic has also inspired adidas, who are co-operating with the organisation Parley for the Oceans to produce trainers using the recycled waste from the seas and beaches.

And, while P&G are claiming their 'first', there's a small but great brand who have been doing this for a while - Method.

If I was working at Method, I'd have a slight sly smile on my face about all P&G's ta-raaing about their Head & Shoulders bottle. Imitation is the sincerest form of flattery.
Posted by Sue Imgrund at 11:06

Hi Sue, I enjoyed a giggle re your ‘hats off to P&G’ comment!

And on a similar theme:
https://theculturetrip.com/europe/sweden/articles/ikeas-new-must-have-kitchen-is-made-from-recycled-plastic-bottles/?utm_source=facebook&utm_medium=facebook&utm_campaign=02092017Swedenkitchen

And here's an initiative from Timberland:
https://www.contagious.com/blogs/news-and-views/timberland-thread-collection

Important that PR and stunts involving plastic are tied to something the company is actually doing in its processes rather than just building awareness of the problem:
https://www.campaignlive.co.uk/article/its-time-brands-call-time-plastic-stunts/1581886?bulletin=campaign_creativity_bulletin&utm_medium=EMAIL&utm_campaign=eNews%20Bulletin&utm_source=20190412&utm_content=Campaign%20Creativity%20Fix%20(58)::&email_hash=