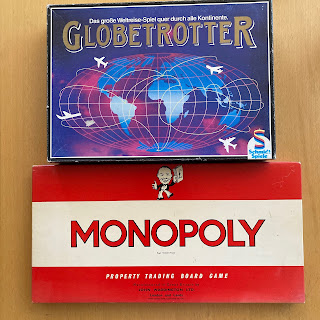 It’s often been observed that we learn how to live through play, starting with playing shops or house as toddlers. My childhood included games that involved a historic or sci-fi fantasy world, such as Escape from Colditz or Thunderbirds, but also games that later found direct application in the grown-up world: Monopoly or Go-The International Travel Game.

But these days, do children really aspire to be a jet-setter or propery tycoon? I was interested to hear this week about a new game, developed by a group of young entrepreneurs, whose theme is a little closer to today’s aspirations - tackling climate change.

The group in question is Carducation from a school in Kelkheim, just down the road from here. They quote the inventor of the Kindergarten concept, Friedrich Fröbel - The source of all that is good lies in play (or thereabouts) and their business idea is to educate about important issues via card games. It’s a sort of “Cards for Humanity."

The first card game is called Ecucation - a strategy game in which businesses must balance profit with environmental responsibility, and, as in real life, catastrophes such as flooding or forest fires can turn up unexpectedy to scupper the best-laid plans.

The young start-up has been declared the best school firm in Germany by the Junior-Projekt, which encourages and fosters entrepreneurial business in schools. And the cards have already been seen in the hands of Chancellor Scholz and Vice-Chancellor Habeck.

All-in-all, a neat idea, and one that a few brands could learn from in their ESG communication. All the best to Carducation for the European final in July!