When did ads get so po-faced?

I'm afraid that the words 'social experiment' in connection with advertising now have me running for the hills - or at least the fridge for a nice cool beer. Although it's not even safe there any more.

The latest ad for Heineken is over 4 minutes long, and is called 'Worlds Apart.' It takes two strangers who - unknown to them - have opposing views on political, social or environmental issues. The pair are given a task - to build some furniture together - and find out what they have in common. The big reveal then comes up and the hapless victims/actors stars then have a chance to walk away or sit down, have a beer and discuss their differences.

It would be churlish to dislike this ad. It's well-done, and it does kind of hit on a truth - sit down and put the world to rights over a pint - that's as old as those hills I was about to run to. Maybe it even draws something from Heineken campaigns of yore: Only Heineken can do this? My favourite part is at 3'40"

I guess that I'm no longer in the target audience for Heineken. When I was, back in the 80s, Heineken ads were brilliant. They were like this: 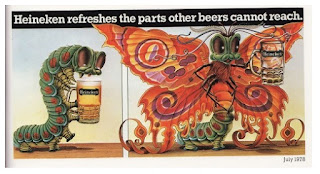 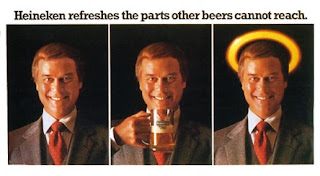 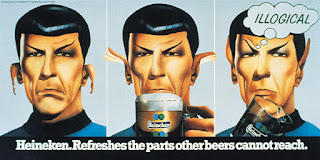 Brilliant, silly, unrealistic, and completely irresponsible (if you were to take them seriously.)

I still remember them through over thirty years' beer fuddle today.

But how realistic, exactly, is 'Worlds Apart?'

Would such pairs of people ever really come together, outside of a 'social experiment?' Or would they continue to rant forth to their social media followers in their echo chamber?

Would any of these people even find a pub to go and sit in and put the world to rights in the UK?

Personally, I prefer this new ad from Carlsberg. Probably.

Hi Sue, I much prefer the Carlsberg advert and would happily watch it again. The Heineken one rather got on my nerves, and I ended up stopping it before the end. I would be up making a nice cup of tea the second it came on TV!

With regards to finding a pub in the UK, there are still plenty but sitting outside in the sunshine is a thing of the past unless you happen to be a smoker. These days the best seats in the house (outside) are surrounded by fag ends and overflowing ashtrays. It’s a crazy old world when you think about it.

It is extraordinary how much has changed just in the last 20 years or so. It wasn't that long ago that smoking was commonplace in cinemas, on planes, public transport, in restaurants while others were eating. We were talking about cigarette packaging yesterday and it doesn't seem quite right to have some of the gruesome images on the packets on public display where non-smokers, children etc. get them right in their faces.

Creativity is being stifled by the fear of litigation. I feel sure I must have read that somewhere or perhaps heard it on the radio – either way it was all I could think as I read the article. We are all afraid of doing or saying the wrong thing these days and that is obviously true for those in advertising. Lawyers and their ilk have a lot to answer for.

Yup! It's like working with one or both hands tied round your back. I'm still on my soapbox about humour in advertising with my new post today ...

A good article that tackles this issue: partly it's caused by the reliance on algorithms and the idea that advertising shouldn't be different and disruptive - it should be 'relevant' and 'fit seamlessly into the individual's life'