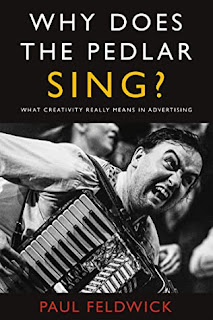 During the first wave of the pandemic, advertisers from retailers to telecoms, food to insurance, appeared to all have received the same script for their TV commercials, which was executed in a remarkably similar fashion worldwide: plinky piano music, an "empathetic" yet rather sombre tone, vignettes of human despair and hope, and a promise of "being there for you.”

Meanwhile, on social media, people created and shared their own entertainment: OK, there were plenty of mawkish poems, but much inventive and fun stuff too - horse-riding and mountain-climbing illusions created within the confines of a small apartment, toilet-paper jokes a-plenty and song parodies that most of us still have stuck in their heads. Which seems unlikely for any of those "we're here for you" ads, let alone whichever brands they were attached to.

Those few weeks really brought into focus the challenge facing the advertising industry today, which Paul Feldwick examines in his latest book, "Why does the pedlar sing?". Advertising is less liked and less effective than it was a decade or two ago.

While many of those in the industry may put the blame at the door of the client, for not being brave enough to buy their edgy, disruptive ideas, Paul Feldwick asks the question: what is good advertising, actually? Is it the bold, kick-ass, "stuff that matters" that's celebrated on LinkedIn and at awards ceremonies?

The answer to this question is drawn from Paul Feldwick's previous book, "The Anatomy of Humbug" as well as a fascinating look back to the origins of modern advertising, 20th century examples from his own experience, and recent studies/works from Binet & Field, Orlando Wood and Byron Sharp: good advertising is popular, something people like and something that makes brands famous.

The book is full of good advice on how to develop - and even create - better advertising. I work as a strategic planner, and I found the idea of getting away from the "essentialist" theory of brands a good wake-up call: instead of theorising about brand essences in a Platonic sort of way, get down to a direct appeal to the senses through a brand's "distinctive assets". And let the "creative process" - if it can be described as such - take its chaotic, iterative, not logically-predictable course.

The book raised questions with me, which is a good sign. Is fame (in a mass-media, mainstream sense) different for niche or local brands? And how does the call for more representation/reflection of people's lives in advertising tally with a return to the fun of the fair, the cartoon animals, the wild and wonderful, satire and general nonsense? Not to mention the much stricter regulations and guidelines imposed on the industry?

Like "The Anatomy of Humbug" before it, "Why does the pedlar sing" is engagingly-written, with a good dose of personal experience and opinion thrown in. I'd recommend it to anyone who works in brand communications and advertising.

And once lockdown is over and I can get back to the UK, I'm heading to the Museum of Brands.