A lemming’s life on automatic 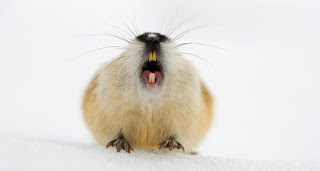 One of my favourite topics on Extrawurst is how human behaviour is changing in relation to the internet and due to digitalisation. There’s a progression from intrepid surfing to good-natured stumbling to passive feeding - although this current phase tends to be reframed by advertisers in terms of “being served”, conjuring up visions of waiters, bow ties and silver salvers, rather than geese with tubes down their necks.

I recently read a presentation which looked at this progression with reference to one aspect of behaviour: driving and navigation. Back in the 1990s, this was an analogue process involving maps, atlases and route cards, with the co-driver fully in control - and probably responsible when anything went wrong. Although I still blame our 1995 off-road adventure in Bryce Canyon National Park, testing the hired saloon car to its limits, on a misleading map rather than navigational incompetence on my part.

Moving on to the 2000s and the first navigation systems - very much a digital support which the driver could attend to or not as they saw fit. The navigation system in my 2006 Audi was almost impossible to set up and involved a CD, which of course was rapidly out of date. Quite often, I didn’t bother and drew up a route card, especially if venturing outside Germany.

In the 2020s we’ve moved from the driver/navigator as pathfinder right through to being digitally led and following blindly. The presentation makes a lemming analogy, of which more later, but you get the point. Unquestioning, submissive to the machine, following the orders. And in the future, this won’t just be the navigating side of things but the driving too.

Now some of this is all well and good. Digitalisation makes life easy, so you can concentrate on other things (although I always wonder what other things those could be). But I do worry that each time I enter a new destination, the compass in my head becomes a little less on the ball. I still like to do stuff from first principles: get the old map out and see roughly where I’m heading for. In the last century, labour-saving devices reduced the drudgery of washing and cleaning by hand, but is mental labour-saving, where the cogs of the mind grow sluggish through lack of use really a positive development?

Can pandemic-acceerated digitalisation be seen - in some respects - as a kind of instituationalisation in which we get lazy, start seeing responsibility and independence as burdens, and stop making our own choices?

For brands, there seems to be value in creating mental and physical availability combined with the feeling that the customer has made a conscious choice for that brand, rather than “being served” what an algorithm computes that person might like. And with some brands/categories, the scarcity/discovery/unseamless/difficult to find route could also be of interest.

By the way, back to those furry creatures. The “mass suicide” is a not-so-urban myth. The observed behaviour is more to do with migration - dispersal to resolve population density - and a few accidental deaths in the process. Nature’s way.