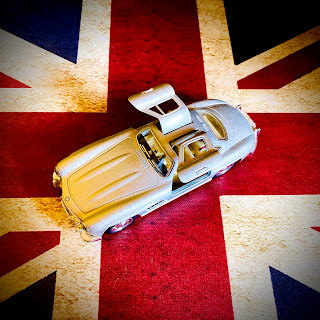 This month’s Retrowurst, from October 2003, is one of those lazy ones where I didn’t bother writing anything particularly original, but instead chose to rehash a report from someone else. In this case, Interbrand’s Best Global Brands.

Interbrand won’t be revealing their top of the pops until 20th October, so we’ll have to make do with last year’s ranking to see who’s still in and who’s definitely out.

In 2003, 8 of the Top 10 brands were of US origin, and that’s now 7 out of 10. However, two of the three non-US brands are from Asia-Pacific, with only one European origin brand in the Top 10. Nokia is long gone, so this year it’s Germany which has that honour - with Mercedes at No. 8.

European-origin brands aren’t doing badly as far as the Top 50 goes. In 2003, there were 4 German-origin brands in the Top 50 and 2020, there are 7. The usual suspects from the auto branch, or mobility, or whatever it’s called these days, plus SAP, Allianz and adidas.

France had 2 brands in the Top 50 in 2003, now there are 5 - from the luxury/fashion/beauty side of things (those old stereotypes live on) - oh, and AXA too. (Louis Vuitton, Chanel, Hermes, L’Oreal)

I thought I’d refrain from writing anything about the Oktoberfest this month and turn my attention to something of more general European interest. While looking through Interbrand’s League table of the Top 100 Global Brands for 2003, it struck me that, despite the trend to globalisation, we in ‘Old Europe’ are actually best at doing what might be expected from the old stereotypes. Indeed, glancing at the list reminds one of all those ‘heaven and hell jokes’ which preface every other newspaper article about Europe - ‘heaven is where the police are British, the cooks French, the engineers German, the lovers Italian and the Swiss keep the time. Hell is where the police are German, the cooks British, the engineers French, the lovers Swiss and the Italians keep the time’ - or however the thing goes.

Before I get onto what I mean, I’ll just preface this by giving a few provisos about the Interbrand Top 100 table- first, it’s about global brands, so to get onto it, your brand must be over $1 billion, it must be global (with at least a third of sales outside your home market and good distribution across all major continents) and you must have publicly available marketing and financial data (which excludes big players like Visa, the BBC and Mars). Secondly, the brands are listed in order of Brand Value- a complex calculation in which Interbrand take a large number of difference forces and influences into account to work out how much a brand is likely to earn in the future, discounted to a present value based on risk. So we are not talking anything simple like sales or awareness here.

Some general observations about the Top 100- it is dominated by US origin brands, as one might expect. Eight out of the Top 10 brands are US, covering categories as widespread as soft drinks (Coca Cola), software (Microsoft), entertainment (Disney) and tobacco (Marlboro). The Top 5 brands are all US (Coca Cola, Microsoft, IBM, GE and Intel), with Europe first making an entry at number 6 with Nokia. The Far East, in the form of Japan, makes its first entry at position 11 with Toyota. It’s actually surprising; perhaps, that the top brand from Europe should have the (relatively) obscure homeland (to us Brits) of Finland. In fact, without wanting to sound rather unpatriotic, Great Britain does not figure as prominently in this table as we would perhaps like. Maybe we’re not good at global brands but, as a country that prides itself on the quality of its marketing and advertising, particularly in relation to some of our European neighbours, we don’t seem to cut it in the global arena. The Germans, for example, have four brands in the Top 50, including Mercedes in the Top 10. The French have two brands in the Top 50. The only brand from GB in the Top 50 is HSBC at position 37- successful though HSBC undeniably is; it is hardly top of the wish list for ambitious marketers or advertising agencies hoping to produce stunning creative work.

So, onto the stereotypes. I’ll start with the Germans, as this is an Extrawurst. In the Top 100 for Germany are Mercedes, BMW, SAP, VW, Adidas and Nivea- so very heavy on the cars and technology with a bit of sport and wholesome body care in addition. Scandinavia boasts three brands in the Top 100; Nokia, Ikea and Ericsson- to be expected from thinly populated countries with huge pine forests! For France, we have the expected mixture of luxury goods, beauty, food and drink with the Louis Vuitton, L’Oreal, Chanel, Danone, Hermes, Hennessy and Moet & Chandon brands. Italy is fashion, fashion, fashion with Gucci and Prada. With Nescafe, Nestle and Rolex, the Swiss are heavy on chocolate and watches. The Netherlands have a rather mixed bag (but somehow appropriate) of electronics, oil/exploration and beer - Philips, Shell and Heineken are their brands in the Top 100. And, finally, the combination of banking, exploration/oil and journalism topped up with booze (HSBC, BP, Reuters, Shell, Smirnoff and Johnnie Walker) could only be British!

Of course, the big change is that the tech brands dominating the Top 50 were still in Kindergarten back in 2003. It’ll be interesting to see if and how the big German brands reinvent themselves over the next decade - or whether they’ll be history, like those Scandi mobile phone brands from the early days of the 21st century.

P.S. HSBC did feature in my last post with their advertising, so maybe I was a little hasty dismissing them as unlikely creative fodder - or maybe it’s a sign of the times