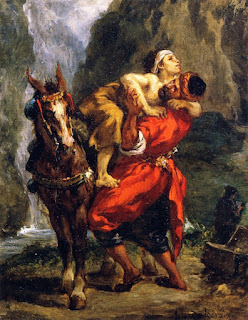 I am not normally a fan of “social experiment” ads. There was a nasty spate of them a few years ago - either manipulative codswallop by beauty brands for “poor me” narcissists. Or po-faced offerings from previously jolly beer brands jumping on the latest Twitter trend. Patronising, preachy and pretentious stuff, instead of being informative, entertaining or useful.

However, when we’re talking life or death rather than cans of cheap lager or mostly-water body lotions, maybe such ideas can make a point.

“First Aid for Humanity” is an ad by VMLY&R Poland for the Polish Red Cross, supported by BNP Paribas. The idea was a first aid training course that used dummies that not only looked like real people, but were modelled based on real people who have faced discrimination. These were a homeless man, a Muslim woman refugee and a genderqueer activist. The participants in the course were encouraged to set any prejudices they may have had aside. At the end, they met the people behind the dummies in real life to hear their stories.

Have a look here.

I listened to a talk by Orlando Wood the other day, and he mentioned that advertising that gets noticed employs metaphor, connections and relationships and is in some ways like a parable - it’s not telling you what to think, but leaving you to process it and work that out for yourself.

And of course, “First Aid for Humanity” is a 21st-century retelling of one of the greatest parables of all time - The Good Samaritan (see Luke 10: 25 - 37), about the man who “fell among thieves” and was ignored and left for dead by both a priest and an assistant priest of his own religion before he was rescued and cared-for by a man of a different and opposing religion.

“First Aid for Humanity” is an effective piece of communication, but I did wonder if it could be have been even more effective if the dummies had gone beyond the “acceptable” victims of discrimination.

What if your neighbour is a skinhead football hooligan with a few dubious tattoos?