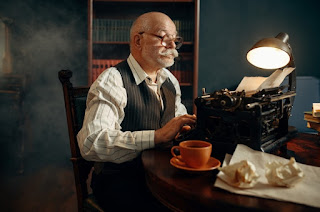 Do you know that feeling? You discover a perfect little restaurant tucked away somewhere, then before you know it, it’s featured in some fashionable magazine or the latest influencer swans into it. Your little secret is secret no more.

I feel the same about my working arrangements as a freelancer, especially now that the sharks are out for that recent acronym, WFH. The good, not so good, great and think-they’re-great of the Davos set are proclaiming that “remote working has not worked.” That was Larry Fink of Black Rock, apparently.

Meanwhile, at the other end (?) of the political spectrum, certain journalists are having a bash at “the pyjama classes” and “the laptop elites.” I have some sympathy with this view, having seen efforts from ad agencies in 2020 featuring every WFH cliche going: the pyjamas and jogging pants, the dog/cat/kids invading the Zoom conference with its silly, jokey background. Meanwhile, there weren’t any people featured in these Covid vignettes who were out there doing a job, keeping the world running. And yes, it make me wonder about the value of what I do here ...

But there’s a difference. I have been self-employed for twenty years now and I started without a laptop, just a cheap Aldi computer,  a Freenet email address and a trusty Nokia mobile phone. Within 18 months, I was lucky indeed: we bought a house and the top floor became my office. From the start, I was disciplined, although it was against my nature - but I had to be, starting out in business with a toddler in tow.

Having an office space (which happens to be in my home) does make the difference. There is a door, which I can shut. A whole weekend can go by without me going upstairs to the top floor. Sometimes I am up there evenings, or for a few hours on Sunday afternoon, working, but that’s usually my choice. The clue is in the term “self-employed."

This isn’t meant to be a whinge about being lumped in with everyone else who was forced into WFH in 2020, although it does sometimes feel to me like my experience with gin & tonic - something I’ve always enjoyed, which became terribly fashionable but is now on the wane again. All  I want is to make a simple distinction: I’m working from an office - which happens to be at home.