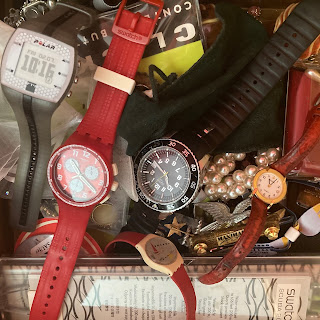 With the longest day of 2021 behind us, it seems right that the next article from the pre-Extrawurst archive is one I wrote on the subject of Time, eighteen years ago, in July 2003. I’d been up to the Account Planning Group Germany conference and was fascinated by a talk given by Professor Karlheinz A. Geissler on the subject of the German relationship to speed and time. A prediction was made that “we will be ruled by the mobile phone/communications handset, not by the clock.”

Remember, this was a good few years before smart phones ...

I was up at the German Account Planning Group’s annual ‘Open Source’ event in Hamburg last week, where, sandwiched in between two talks - the entertaining-but-expected (an Army colonel talking about military strategy and what we commercial Planners can learn from it) and the expected – and mind-blowingly tedious (a Management Consultant doing an elongated sales pitch; see www.rolandberger.de for the full horror) - was a fascinating talk from Professor Karlheinz A. Geissler on the subject of Time.

The professor spoke about our relationship with time over history, moving from the time when time and the weather were one and the same (the word for both remains similar in the Latin-based languages such as temps, tempo), to the age of the clock, to the industrial age where man’s speed was no longer limited by nature and through to our own age. He argued that, in our ‘post-modern’ world, the key is no longer speed but flexibility. That is, the people that will succeed in our times are those that have the flexibility to do several things at once, not those who can do one thing faster than anyone else. We will be ruled by the mobile phone/communications handset, not by the clock.

Interestingly, he raised the point that some people/cultures already have a head-start in this new world of flexibility, the US (generally) and working mothers being two examples he cited. Conversely, other cultures may well be handicapped in the adaptation process, especially those who have excelled in the last age. Professor Geissler was not slow in holding up the Germans as the key example here. Maybe the Swiss have a greater obsession with clocks and punctuality, but the Germans combine this with their love of the stopwatch and what it measures - speed, rather than time!

So, this is the country where Michael Schumacher is the most revered sports hero but where you’re not allowed to use your washing machine after 8pm; where 150mph on the Autobahn is totally acceptable if your car is built for it (and most German cars are) but where having a BBQ party that goes on after 10pm is not. Even in German advertising agencies, punctuality and efficiency rule the roost- in some of Jung von Matt’s conference rooms there are no chairs, encouraging meetings to begin and end on time - in fact, there is no English equivalent of the German word Stehtischwhich is literally, a table to stand at. Contrast that with the comfy sofas of UK advertising agencies!

This all brings me on to a topic of huge current interest here in the area of retailing- opening hours. When I first moved to Germany in 1996, the opening hours, even in the big cities, were like something out of 1950s Britain (minus the ration books!) It seemed that what you won on the pubs (most open until 1am), you lost on the supermarkets, which were only open until 1pm on Saturdays (typical German exception of one Saturday per month being ‘long Saturday’ but I was blowed if I could ever remember whether Langesamstag was the first in the month, the last or in the middle somewhere!). Imagine the scene, if you will, of the entire working population of Frankfurt all queuing up at the same three supermarket tills at 12.30pm on a Saturday. I was appalled by this: the grudging acceptance with which the local people regarded this, and the underlying implication that women aren’t meant to be working, except as a good Hausfrau, so they can jolly well do the shopping during the week. Things improved a little a year or two later, with supermarkets opening until 8pm most weekdays and until 4pm on Saturdays.

However, the latest change has met with disapproval from many sides. For the last month or so, the Supermarkets have stayed open until 8pm on Saturdays. The church is up in arms, so to speak, as they see this as the next (final?) step down the slippery slope to that abomination, Sunday opening. (NB. Finding a shop open on Sundays here in Germany- with the exception of petrol stations, airports, railway stations and the odd kiosk- is about as difficult as beating Michael Schumacher round the Nürburgring. Even the DIY and garden centres are geschlossen.) But the Church aside, what is perhaps surprising is the somewhat unenthusiastic attitude of the general population. Who in their right mind, they think, would want to go to a Supermarket at 7pm on Saturday evening, when they should be watching the Bundesliga, throwing half a pig onto the BBQ or baking a cake for Sunday’s Kaffee und Kuchen with the mother-in-law?

The point here is not that the German people don’t like change, but that this is a change that they don’t understand. It doesn’t fit into the unwritten rules of order and efficiency. If someone has to do their shopping on Saturday evening, they must be disorganised (not spontaneous). They clearly haven’t planned ahead. I haven’t been shopping myself yet on Saturday evening, but I’ll make an effort this weekend to tear myself away from the cake-baking, or the BBQ (Bundesliga is in the middle of the summer pause!). I suspect that the people I’ll see; far from being disorganised, will be the sort of spontaneous, flexible consumers who will have to represent Germany’s future as they move away from the age of speed and punctuality to the age of flexibility and multiple lives all lived simultaneously.

Pre-pandemic, Germany wasn’t quite on 24/7. Retail opening hours had stretched to 10pm or so, but Sunday remains sacred (except for online ordering, of which more later).

It’s interesting how the pandemic has thrown time out of the window, along with freedom, while online shopping has devastated the city centre (although local independent shops of the butcher, baker and candlestick maker variety seem to be thriving).

What intrigues me is that, over the eighteen years that have passed, I can still see Professor Geissler and his antiquated overhead slides before me, and I can recall many of his words of wisdom.

I can’t remember a single thing the chap from the management consultancy (with his slick PowerPoint presentation) said.

I understand that Professor Geissler doesn’t have a driving licence and lives “watchless”.