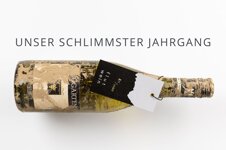 The flooding in Germany has dominated the news for over a week now, along with efforts to help, financially and through volunteering. One of the more unusual approaches is a campaign called Flutwein, or “Flood Wine”.

The Ahrweiler region is known for its wine production, and the idea behind this campaign is to to sell salvaged bottles to support the rebuilding of the region and to give those hit by the disaster financial support.

The publicity for the campaign shows “original” bottles, covered in mud and numbered 1 - 1000. Slogans include Unser Schlimmster Jahrgang (“Our worst vintage”) and Trauerburgunder (“Grief Burgundy” - a play on the name Grauerburgunder).

Behind the campaign is a collective of restaurants, wine growers and charity clubs from the region.

The campaign is being run on a crowdfunding site, where the numbered bottles have already sold out (example price: €500 for bottles numbered 100 - 150). Donations can also be made direct, or for unnumbered bottles (e.g. €60 for 3).

Is it tasteless to produce a slightly macabre campaign where many have lost their lives and livelihoods?

Or do the results speak for themselves - heading towards €900K in donations when I last looked?