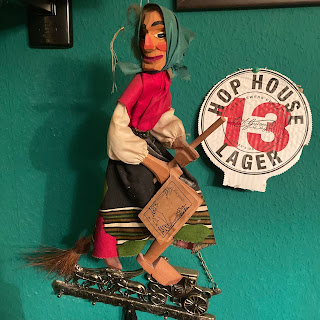 Rummaging around in the archives, I found this article from August 2003. It relates one of the heftier waves of culture shock I had on coming to Germany: the influence of the Kräuterhex or herb-witch. Did friends and relatives have my best interests at heart when they recommended wrapping my neck in mashed potatoes or smothering my ankles in curd cheese? Was it the language barrier? Or were they having me on?

This month, I’d like to write about the German drug scene and its chief ‘pusher’- the Kräuterhex or ‘Herb Witch’ who, having died out long ago in the UK, is alive and kicking and plying her trade as well as ever here.

Before I moved to Germany, I’d hear the odd complaint about not being able to get this or that lotion or potion that one can normally pick up in Superdrug in the UK without a full medical examination and the signing and stamping of various forms. I had always assumed that this was a consequence of a privatised health system and a way for the doctors to make money. It probably is, but I was to learn that this was merely a superficial symptom of a deeper underlying cause.

In my first few months in Germany, I got a nasty sore throat. Now, normally, with something like that in the UK, you’d go to Boots and pick up some Strepsils and maybe a bottle of Veno’s. Instead, my mother-in-law suggested that the sure-fire way to get better was to make a Kartoffelwickel. As far as I understood it, this involves boiling some potatoes, mashing them up a bit and wrapping them in a tea towel around your neck. Putting the Kartoffelwickel idea down as some elderly eccentricity, I went into the Apotheke to try and find something more akin to my familiar brands of cough medicine. Instead of my familiar Veno’s, I got given a bottle of something that appeared to be made from ivy leaves, which I had always thought were poisonous.

My mother-in-law’s strange ideas (to my way of thinking) about the healing power of potatoes turned out to be normal in Germany not just among the older generation. When I got an unexplained swelling in my ankles, a friend (some years younger than me) suggested that a Quarkwickel would see that off in no time. This consisted in smearing Quark(curd cheese) all over the afflicted areas and sitting with my feet up. This was very messy indeed, but it did the trick, although I suspected that it had more to do with having a rest than anything else.

During the birth of my son, I wasn’t offered anything to take the pain away (maybe I didn’t scream loudly enough) except a few pinhead-sized homeopathic pills which were meant to relax me. I can’t honestly remember whether they did or not! And then, once I had a baby, the influence of the Kräuterhex increased tenfold. Recipes for colic remedies from bizarre herbs, more Wickels to deal with fever and colds, bath potions and even something totally weird involving some kind of dark brown root vegetable which one had to somehow extract juice from and pipette into the nose to deal with snuffles were just some of the advice from the Kräuterhex in her various disguises of midwife, baby magazines and other new mothers.

So, there we have it – while we grew up with household names such as Alka Selzer, Disprin, Reach for the Rennies, nothing acts faster than Anadin and so on, the Germans grew up with the Kräuterhex and her lotions and potions. When anyone gets a bout of the runs here, Imodium is only in seldom cases the answer- instead; it’s a diet of Coca Cola and salted pretzel sticks (one of the Kräuterhex’s more modern inventions).

The reason behind all of this is partly the retail structure and partly a more deep-seated psychological orientation to health and illness. Legislation (although this is changing) has meant that medicines, even herbally based ones) can only be bought in the Apotheke and many drugs that we can buy over the counter are prescription only. There are no ‘Supermarket’ – style chemist chains such as Boots here, and the Drogeries which are more akin to Superdrug do not sell medicines as such. However, interestingly, Germans don’t find it a nuisance that they have to make a separate trip to an Apotheke to get certain items; their somewhat hypochondriac nature delights in having an excuse to pick up more strange lotions and potions while they are there; items sold only in the Apotheke – skincare or herbal teas, for example, have a certain cachet. In some recent work I did on Vitamin C tablets, consumers generally pooh-poohed the Vitamin C that one can buy in Aldi and other supermarkets; the belief is that these are probably almost placebo-like and that the only Vitamins that are worth taking (even though they are three times as expensive) are the brands one can buy at the Apotheke.

The retail structure in itself is an outward symptom of the underlying psychological orientation to health and illness in Germany. Traditional and ‘alternative’ medicine have never been so divided here as in the UK. It is not unlikely that a ‘traditional’ Doctor would share a practice with a homeopath or that a classically-trained dentist would also practise acupuncture. It all goes back to a more holistic view of the body, mind and soul, which is closer to an Eastern view sometimes that a UK view.

This has huge implications for food, drink and beauty products. There are huge markets here for ‘anything herbal’. What in the UK is a tiny niche, such as ‘Herbal Candy’- like Ricola- is a huge market sector here. Herbal teas are huge - it’s sometimes difficult to find ‘normal’ black tea amongst the array. In alcoholic drinks, there are certainly more varieties of herbal Schnapps than anyone would care to drink while yoghurts pop up with ingredients like hawthorn or Aloe Vera. One of the most popular flavours for children’s sweets and ice cream is Waldmeister - woodruff. While one gets the impression that, in the UK, many of these herbal products are faddish; the old Kräuterhex has such a hold over the German public that her influence will never fade away.

Eighteen years later and not a lot has changed, other than online ordering and the establishment of discount Apotheke chains such as Easy Apotheke, founded in 2004, making potions a little more accessible.

Oh, and what was the local Greek Restuarant is now a testing centre, with nose-tickling instead of ouzo and souvlakis. And the venue that was host to basketball games, comedy shows and rock concerts is now the vaccination centre. I’m not sure what the Kräuterhex’s cure for Covid was, but I am sure she wasn’t short on ideas.