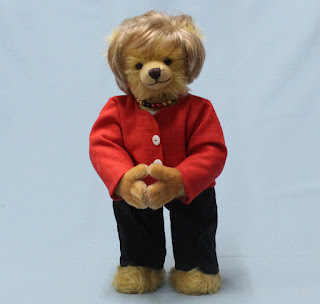 I don’t know if there has, or will be, one of those Barbie collectors’ dolls of Angela Merkel, but somehow the commemorative teddy bears seem more apt. Not made by Steiff, but by another German family firm that’s been around for over a hundered years, the teddy bears are of the typical mohair variety with added Merkel touches - the distinctive hairsytle, the red jacket, the necklace in red, black and gold.

Angela Merkel became Chancellor over 16 years ago, in a Twitter- and iPhone-less world.

The public perception of a country is influenced considerably by the personality of its leader - and with a larger-than-life personality, disproportionately so, as was the case with Donald Trump. Angela Merkel is at the other end of the scale to Mr Trump, but on the other hand, the world has had sixteen years of her presence as leader of Germany. While some leaders are all about show, Mrs Merkel projects an impression of substance/integrity and diligence, and the Christian part of her party’s name, and her strong faith result in an impression of universal humanity and decency. But there’s also a feeling that too much is rooted in the past, with a cautiousness or resistence to change. Whether Germany’s slight reluctance to leap, devil-may-care, into the brave new digital world will be the undoing of the nation remains to be seen.

Back in 2009, I wrote a post entitled The Lady’s not for Branding about Angela Merkel’s imperviousness to branding. A lot of it still applies, although journalists have taken to the “Mutti” nickname and the “iconic” (bleurgh!) colourful jackets and “diamond” hands with glee.

I imagine that Angela Merkel has the same reaction to being referred to as “iconic” as to the commemorative teddy bears - mild amusement. But I expect we’ll never know how she really feels, and maybe things are good that way.