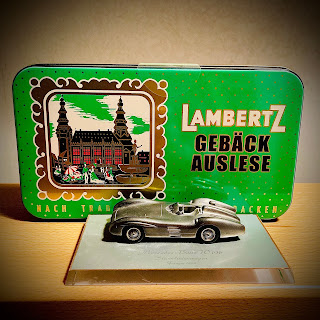 I wonder, with some of my Retrowurst posts, whether they are worth resurrecting, but with this one, I have no doubt. The word of the year 19 years ago, back in 2003 was “Das Alte Europe” - a phrase tied up with the war in Iraq that came to symbolise a new-found positive self-confidence amongst Europeans.

In Wiesbaden sits a typically German Society, the GfdS (Gesellschaft für deutsche Sprache) or Society for the German Language. At the end of each year, these eminent linguists announce the word of the year- the word that has somehow characterised the year and has been top-of-mind in the news. For example, the word of the year for 2002 was ‘Teuro’; a word made from a combination of the German word for ‘expensive’- ‘teuer’- and the Euro, which had been introduced as currency at the beginning of the year. The word Teuro summed up the general mood amongst the German people for the year 2002 and the earlier part of 2003- Germany had followed its role-model, the U.S, on the next step to being the ‘United States of Europe’ with their very own Eurodollars, but once they had them, all anyone could do was whinge about them. While the French simply ignored the Euros and carried on talking in Francs, almost everyone in Germany was guilty of using the Teuro word and regaling friends with sob-stories about how x cost exactly the same in Euros as it had in Deutschmarks (the exchange rate was approximately 2 DMs per Euro) at least once a day. There were campaigns on local radio and the local press, not to mention the Internet, to ‘name and shame’ Teuro terrorists - services and retailers guilty of this crime - with the zeal normally reserved for paedophiles.

This whole state of affairs was yet another symptom of a whinging, dispirited nation in a crisis of self-confidence, continually beating itself up. Every article in the business press bemoaned the lack of innovation and success behind German companies and brands and the words ‘crisis’ and ‘lack of self confidence’ characterised the tonality. Even though the German football team managed to get into the final of the World Cup, they were still criticised for playing dull, inspiring football. And in a qualification game for Euro 2004, they were unlucky enough to draw against Iceland. Immediately after the game, Rudi Voller was bombarded with criticism on the crisis facing the lacklustre team; one mediocre performance was held up as typifying everything that was wrong, uninspiring, dull, uncreative and resting on their laurels about German football. Rudi lost his rag, which was highly amusing to watch on live TV, with a line about ‘it’s all very well for you lot sitting here in the studio on your high horses drinking Weissbier’. But he had a point. Germans love to beat themselves up about failure - for a country with an urge towards efficiency and perfectionism; they can be mighty self-punishing and hard on themselves when the chips are down.

However, sometime in Spring last year, the tide turned, although I think it is only being acknowledged now. For the year 2003, the GfdS have chosen the phrase ‘Das alte Europa’ or ‘Old Europe’ as the word of the year. The phrase was originally a term U.S Secretary of Defence Donald Rumsfeld used to disparage Germany and France for resisting war in Iraq but became a proud rallying cry for opponents of the war. As Rudolf Hoberg of the GfdS said: “The term ‘Old Europe’ was originally used as a provocation, but its meaning underwent a transformation and now stands for a new-found symbol for positive self-confidence among Europeans.”

Gradually, we began to see a change in Germany’s relationship with the US - and not just in the political sphere. Germany has had a long, somewhat unequal love-affair with the U.S, particularly when it comes to brands and marketing. This can be seen from U.S brands being held up as textbook examples in seminars and articles about brands with all the usual suspects present - Apple, e-Bay, Starbucks, Dell and the like- to the use of U.S English marketing tools and terms through to a rash of ‘American-Style’ product innovations, be it restaurants, pizzas, clothing stores, muffin mixes or bottles of cola beer. But now the love affair with the U.S is simmering down. There is a backlash against the Anglicisation of the German language and brand names like ‘Power Team’, ‘Big Gum’ or ‘Pick-Up’ are now confined to products for the under 8s who still find such things ‘cool’ although the German word ‘geil’ is the more favoured expression in the playground. Instead of American-style Deep Pan pizzas with gaudy stars and stripes packaging, authentic Italian (Old Europe) pizzas with Parma Ham and rocket are taking over the freezer cabinet.

Having shown that they mean to do things their own way in the world of politics, I believe Germany may well follow suit in the world of marketing this year. Instead of ‘innovating’ with pale Starbucks-imitation coffee and bagel chains or stars-and-stripes Colabeer, I believe that Germany (Old Europe) will look to its own past (still avoiding certain time periods!) in order to innovate for the future.

This could consist of developing Germany’s own Icon brands, rather than continually looking enviously at the U.S Icons. Audi, Mercedes, Milka, Steiff, Lufthansa, Nivea, Krupp, Bosch, Adidas- the list is endless. Although some of these may not shout so loudly on the global stage, these brands are no less iconic than Marlboro, Harley-Davidson or Coca-Cola. Indeed, with the values of authenticity, heritage and quality that these brands have, they are particularly well-placed to appeal to those who value the ‘genuine article’ all over the world.

Germany is also good at looking to the past and re-inventing. The new Beetle and Audi TT are both good examples. It doesn’t have to be Germany’s past either if we see what BMW has done with the New Mini. The Adidas Retro range and the revival of beloved DDR brands (see www.ossiladen.de and www.ossiversand.de ) are also good examples.

Doing the same but differently is another way to innovate. The Germans, in case you missed it, won the World Cup in football again last year - with the women’s team!

Well, I think the love affair with the US well and truly fizzled out once Mr Trump was at the helm, but Europe (old or new) as such is in a pretty sorry state as far as self-confidence goes.  Brexit, Covid and rattling of sabres at the European borders are seeing to that.

Still, even if the new German government have yet to prove themselves, it’s pleasing to see that the big German brands, including the discounter retailers Aldi and Lidl have a reasonably strong presence on the world stage.

And the values underlying the classic German brands - authenticity, heritage and quality - couldn’t be more fitting for a world increasingly concerned about sustainability. Long live “Made in Germany”!