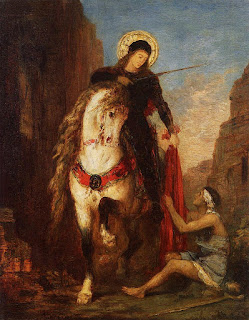 A couple of weeks ago, St Martin’s Day was celebrated in Germany. I’ve always thought that the traditions surrounding this Saint’s day were rather more charming and heart-warming than the gaudy, ghoulish and horribly commercialised Halloween.

St Martin was a Roman soldier most famous for an act of sharing and generosity. It is said that he came across a beggarman dressed in rags in the depths of winter. Martin took his red cloak, cut it in half with his sword and gave half to the poor man to keep him warm. This act is celebrated by children in processions with (often home-made) lanterns, songs and a reenactment of the noble act. This may all take place round a bonfire and a real horse may appear if you live in a rural area.

St Martin’s Day is all tied up with the end of harvest and the beginning of the “winter revelling season” - with roast goose and the first wine of the season.

I was new to all this when I came to Germany, and learned about the customs when my son was at Kindergarten - many hours were spent making lanterns (more hours on the part of the parents than the children, usually). The story of St Martin is a universal one, which teaches children the value of sharing.

“Sharing” is one of those words whose meaning has shifted quite dramatically in the last twenty years. Going back to St Martin, the verb used regarding the cloak is teilen - which bears the sense of “parting”. St Martin divides his cloak into two parts, and he has to part with one of them to provide the beggarman with warmth. He makes a sacrifice -  sharing involves giving something to someone else that you don’t get back. This is sometimes a hard lesson to learn - I remember when my brother was in hospital as a child. All sweets that were brought in by parents were put in a communal tin, then divided out equally so every child got a fair share. My brother wasn’t happy at some other child getting his favourite sweets!

Sharing, when it comes to non-material things, has always had connotations of “having something in common”. But the word seems to be shifting from a meaning that’s about apportion, giving and generosity to one that’s about passing on, informing, making public. In this digital world, the sharer keeps whatever it is - photos, stories -unlike St Martin and his cloak.

“Sharing” sounds kind and generous - but is it really? Sometimes sharing feels like passing on a burden, or covering your backside.

I wonder, sometimes, when someone wants to “share some thoughts with me” whether they might be better keeping them to themself.

Well goodness me - I hadn’t read this before I wrote this, as it were: https://www.thetimes.co.uk/article/as-we-inwardly-curate-our-cosy-truths-theres-a-world-outside-in-trouble-rcp5wrc6c