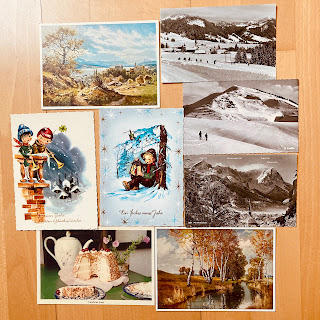 This month’s Retrowurst is particularly interesting from a personal point of view. I wrote it while in my 40s and it concerned my perception of “old people” in Germany at that time. It’s full of observations about the 60+ age group, Nordic Walking, the Verein and Gutbürgerlich food. My conclusion was that I’d far rather grow older in Germany than in the UK - that Germany was a friendlier and more respectful environment for the old.

Having just clocked up another year, I am feeling a little sensitive about getting older so I thought I’d turn my attention to the older people in Germany and give you some idea as to why I’d probably rather get old here than back in the UK.

If I had to choose one picture that symbolised the current social climate in Germany this year then it would have to be this: a few weeks back I was in Aldi and the place was packed full of ladies aged 60 + in a bit of a rugby scrum. It was a very genteel rugby scrum with lots of helpful smiling and friendly joking and, once I managed a few polite Entschuldigungs, I was close enough to see what all the fuss was about. Aldi had Nordic Walking gear on offer. Not just the sticks, but special jackets, shirts and leggings, headbands, socks and gloves. Now, I still don’t have a clue how a Nordic Walking jacket might differ from something you might go jogging in, but there you go. Obviously, to these ladies, all these items were much sought-after. Not long after, while I was out jogging (no doubt passé amongst the older generation) I saw a group of similar ladies (and their men folk) striding towards me briskly, resplendent in their co-ordinating Aldi outfits. The self-confidence and general Lebensfreude of this group seemed a stark contrast to the continual whining and whingeing of the 30 and 40-somethings that I seem to know in Germany. And, generally, one can see that the 60+ group in Germany are less worried about the future than younger age groups. It may be selfish, but it also stems, perhaps, from a belief amongst this group that the bad times are behind them. For someone born just before, during or just after the war, childhood was tough with families depleted and also divided geographically for years on top of the shortages and rationing.

Somehow the whole education system and social structure of Germany means that everything is shifted 5-10 years upwards compared to the UK. Children don’t start school until they are 6 or even 7 and stay until they are 19. The compulsory military or social service means that further education may not be completed until the late 20s or early 30s. The result of this is that if you set foot in a German advertising agency, for example, and you’re the wrong side of 40, you wouldn’t get the same feeling of being totally out of place that you might in London. And ‘youth’ TV presenters regularly pop up who are pushing 40. All of this means, of course, that you are still described as ‘young’ well into your 40s and middle-age doesn’t really seem to set in until mid-50s.

In Germany, it seems more acceptable to be older. The whole country seems to be more set up for the tastes and needs of older people. Restaurants unashamedly offer Gutbürgerlich food and good wine in traditional surroundings, served by formal but friendly waiters and waitresses who address one with respect rather than the ‘Hi guys my name’s Max specials today are sauerkraut wraps and bratwurst with pesto mash’ approach. The independent butchers, bakers and greengrocers, along with the weekly markets where you can ask exactly which field the cow came from or whose apple trees your Cox’s are from do a roaring trade, especially with older people who have time for good service quality as well as the socialising opportunities that these shops provide. And one sees rather less of the mutton-dressed-as-lamb look and rather more independent ladies’ and gentlemen’s outfitters selling good quality classic clothes in dark greens and browns.

Older people seem to be present somehow in Germany, which is perhaps not surprising as the over 60s comprise 25% of the population currently, which is forecast to rise to 40% by 2050.TV is not dominated by youth – there are plenty of light entertainment and folk-music shows with jolly-looking 60-,70- and 80-pluses linking arms and singing along in the background – and none of this is tongue-in-cheek. In advertising, older models are often used – Nivea pioneered the ‘mature skin’ segment with Nivea Vital over 10 years ago and companies like Davidoff feature older men in their advertising campaign (‘the more you know...’).

Another unique feature of German life where the seniors hold much power is in the notion of Verein or clubs. Even a little village will have dozens of clubs, from rabbit-fanciers to carnival clubs, from handball to opera-singing. These clubs often have a long tradition and will play a major part in the social life of the town, organising local Fests and other events.

Many older people are also politically active. There is a political party called Die Graue Panther (see www.die-grauen-graue-panther.de ) who are calling for a radical reform of the Social Security System, amongst other issues.

As in the UK, there are plenty of Internet sites hosted by and run for older people, such as www.seniorenchatring.de or www.feierabend.de where you can even see a photo of my friends the Nordic Walkers!

What is extraordinary is despite the obsession of marketing trend reports with change and disruption, tearing up the playbook, smashing taboos and stereotypes, there being no “new normal”, a frankly terrifying VUCA world enveloping us and all the rest, things seem to have stayed comfortingly stable.

Yes, of course digitalisation has happened in the last 18 years, but it has been assumed organically, almost naturally, as part of human progress. www.feierabend.de is still chugging along, but in the meantime Facebook and WhatsApp are where the older people are online.

Germany is still a comfortable place for the old. I don’t hear the whinging about “older women being invisible” that seems to wail out of the UK. Maybe because, until recently, we had one in charge.

While Germany with respect to the old hasn’t changed, of course I have. My parents and parents-in-law are all gone now, so I am the older generation. I’m in a couple of Vereine, and have been known to buy comfy merino-wool loden-style shoes. There’s nothing quite like a plate of Gutbürgerlich food, especially at this time of year when the leaves are falling and nights are drawing in.

But I still haven’t succumbed to the joys of Nordic Walking. Not yet.